A Bizarre and Violent Alien Encounter in Spain

The world of alien encounters is already strange enough as it is. after all, here we have tales and stories of people coming across creatures from beyond our world or even our dimension, to leave strange mysteries swirling. Any supposed encounter with an alien being is going to raise eyebrows, but some are even more bizarre than others. From Spain we have just one such case, involving soldiers, a strange creature from beyond out understanding, and a tense encounter involving violence.

Situated close to the Portuguese border, on the left bank of the river Guadiana in the autonomous community of Extremadura, Spain is the city of Badajoz. Occupied since the Bronze Age and once the source of a centuries long dispute between Spain and Portugal that resulted in several wars, the area today is known for its historical Moorish and medieval architecture, as well as its remnants of Roman and Visigothic architecture and the 13th-century Badajoz Cathedral. It is a popular tourist destination in the region and not a place one would immediately associate with UFOs and alien weirdness, yet it was here that in 1976 there would be one of the strangest alien encounters Spain has ever seen.

On November 12, 1976, at approximately 1:45 a.m. local time, two soldiers with the Base Aérea de Talavera la Real (Talavera la Real Air Base) by the names of José María Trejo and Juan Carrizosa Luján were on patrol at the fuel storage area of the base, and until then it had been a rather mundane, normal evening. Typically, nothing much ever happened while they were on duty, the nights slow and boring, but on this evening things were about to get very weird, indeed. It began with a strange noise stirring them from their thoughts, which sounded at first like some sort of radio interference or static. At first they thought it might be coming from trespassers, and the two men searched the area trying to find the source, but as they did the sound changed in quality and volume. Instead of a droning static, it was now transforming into a whistle that became shrill and louder over the coming minutes, building to an ear splitting crescendo after 5 minutes, after which it stopped to bring a wall of silence crashing down around them.

Alarmed, the men readied their weapons, and continued their search of the area, now convinced that something very odd was going down, and as they did the inexplicable sound hit them again, this time loud enough to almost incapacitate them. When the sound stopped again, they saw a vertical light in the sky, similar to a flash that lasted about 15 or 20 seconds. At this point another guard with a guard dog arrived at the scene saying that he had seen and heard the same thing, and when they radioed it in they were ordered to do a sweep of the whole area.

They began a methodical search, walking parallel to the wall separating the main road from the base with the dog, and at first everything seemed quiet and the dog was calm. After walking several hundred meters they were startled by the snapping of sticks or twigs out in the dark, followed by what felt like a vortex of air, which prompted them to release the dog to go investigate. The dog ran off into the darkness to see what was lurking within, but soon returned and was described as being sick and disoriented. The dog ran off towards the noise once again, and again came back looking dazed and erratically staggering about, after which it came back to its senses and did a circling maneuver around the men that it had been trained to do in order to protect its handlers from an outside threat. The men huddled closer, weapons at the ready and peering into the dark trying to figure out what had spooked the dog so badly, and that was when their night would get truly bizarre. 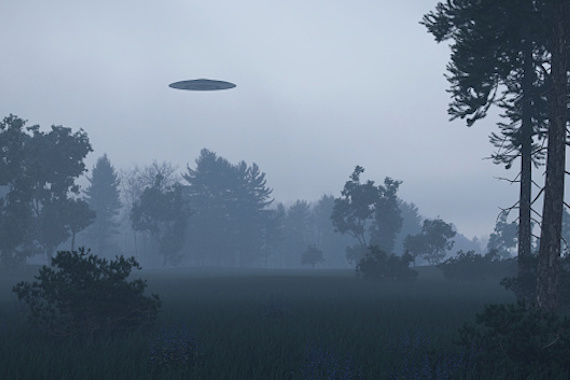 As the dog circled and they stared into the dark, a strange, human-shaped green light bloomed from the night. As it drew closer they could see that it was some sort of bizarre, otherworldly entity, which stood 10 feet tall and seemed to be composed of millions of small light points, with the brightness more intense along its edges. This outlandish illuminated entity was described as having a helmet wear its head would be, freakishly long arms, and no hands or feet. Trejo at this point fainted, and his companions were already opening fire on the thing before he even hit the ground. They purportedly unloaded around 50 rounds at the entity, which seemed to get brighter with each shot until it suddenly flashed brightly and dissipated into thin air. Shortly after, they heard a burst of that whistling sound they had heard earlier, which lasted around 15 seconds before leaving them alone there in the quiet night with their fallen companion.

The men were able to get Trejo back to the base, and the next morning 50 men searched the whole area but found not only no sign of the creature described, but no bullets, casings, or bullet holes either, which was odd because an inspection of the weapons showed that they had indeed been fired. The base was put on high alert for several days, but there was no further appearance of the strange intruder. In the meantime, Trejo gradually regained consciousness, but a few days later lost his vision and collapsed in the mess hall. After this, he was treated and had no further episodes, although doctors could not figure out what had caused his health issue in the first place. After this, the whole incident was just chalked up to a hallucination caused by nerves, lack of sleep, and panic, and the case was sort of forgotten about.

What is now called the “Badajoz UFO incident” or the “Green Man of Talavera la Real” has gone on to become a fairly obscure, but very bizarre case in the annals of alien encounters, with many questions that remain unanswered. What did those men see out there? Was this an alien entity, a human dressed up in some sort of suit, or perhaps an interdimensional interloper? Why was it made up of little points of light and why did it just vanish after being fired on? Indeed, what happened to all of the rounds that had been fired at it?  We may never know the answers to any of these questions, and it remains one of the weirdest alien encounters there is.