A Solar Eclipse and Mass UFO Sighting at Mexico City

Mexico is a land of great beauty and mystery. It is steeped with lore and legends and history, a place almost from another world, and it is also one of the world's most premier hotspots for UFO sightings. Indeed, Mexico regularly appears on lists as being among the top 10 UFO magnets of the world, with countless strange reports from all over the country. One of the oddest and most spectacular is a mass sighting that occurred in 1991 over Mexico City, which was allegedly seen by thousands of people and which has gone on to become one of the stranger mass sightings Mexico has ever seen.

On July 11, 1991, a total solar eclipse occurred from the Pacific Ocean to Brazil, passing over Hawaii, Mexico, Central America, and South America. In Mexico City, Mexico, thousands of people were out to get a look at the rare celestial event that day. Two of these observers were Guillermo Arragin, a television executive, and Jaime Maussan, a journalist, who were shocked to notice a bright, disk-like metallic object hovering in the sky and were able to videotape it easily, as they had already been taping the eclipse. They sent the tape to Jaime Maussan, who produced, directed and hosted Sesenta Minutos, Mexico’s edition of Sixty Minutes. When this footage was shown on TV eight days later, it started a deluge of others calling in to report that they had seen or videotaped the exact same thing during the eclipse, of which Maussan would say:

The telephone lines blew up. I mean 40,000 calls at the same time. Then the system was completely shut out. We received more than 15 videos and we now know for sure that in at least 7 of them, we can see the same ship that was recorded by Guillermo Arragin. 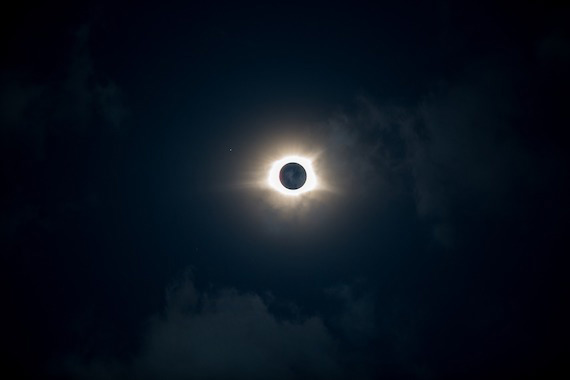 It would turn out that many thousands of people had seen the mysterious object, and all of them described the same metallic shining object, with some reports stating it merely hovered in a stationary position, while others said it moved around while leaving a vaporous trail in its wake, and there were also mentions of the thing having three blinking lights on it. After this, it seems that whatever it was disappeared as the sun emerged once again to bring broad daylight. Among the many people sending in videos of the thing was 19-year-old student Erick Aguilar, who saw it while videotaping the eclipse from a rooftop with his friends and girlfriend. He would describe it as looking like a white point of light that got bigger and brighter as they watched it. At the same time, about 60 miles from Mexico City a businessman named Luis Lara videotaped an object that was identical to the one on Aguilar’s footage, and he was convinced it was not a star, explaining that there was some sort of dark shadow under the object. The Breton family also filmed a similar object in Puebla, eighty miles from Mexico City, and they described the object as pulsating and having a strange wave-like disturbance behind it. It is unclear if this was the same object or a different one. In total, there were over a dozen videos of what seemed to be the same object from different angles and distances, making it one of the most videotaped UFOs ever.

After this appearance on Sesenta Minutos, the UFO sightings were all over the news, becoming a sensation in Mexico and sparking a mass hysteria, and this was only further fueled when a similar object was spotted just two months later at a military air show at Mexico City. On this occasion, an engineer named Vincente Sanchez was filming the air show when he noticed something very bizarre up in the air with those planes. He would say of it:

I was following one of the planes and I saw a shiny dot in the camera. It didn’t fly like a plane; it was undulating. I didn’t know what it was so I let the planes go off and I focused more on this shiny dot in the sky. What I saw was a bright round object, about 10 meters in diameter. It was made of silver, was shining very brightly and reflected the sunlight a lot. The object appeared, undulated, and moved around quickly.

The object would be seen again at the same air show a year later, this time with the disc descending rapidly to seemingly vanish into thin air. At the same air show in 1993 it was seen yet again, this time apparently flying in close proximity to a squadron of helicopters. It is not clear if these sightings have any connection to the mass sighting on July 11, 1991, but at the time many were linking them and even claiming they were the very same object. Over the years the various footage taken on July 11, 1991 has been debated and analyzed, and one astronomer by the name of Tim Printy has given a pretty good argument that it was all down to the planet Venus. As evidence he states that the object can’t be conclusively shown to be moving in any of the videos, the alignment of the object in the footage in relation to other celestial objects shown in some of the videos, such as Mars and Regulus correlates to the position of where Venus should be, and the object disappears when the sun comes back out. Most damningly, he points out that not a single Mexican astronomer, of which there would have been many recording the eclipse, reported any UFO or anything out of the ordinary at all. According to Printy, the videos only appear to show something truly strange because of camera artifacts and the fact that there are no uncropped videos of the object, which makes it all appear even more mysterious. 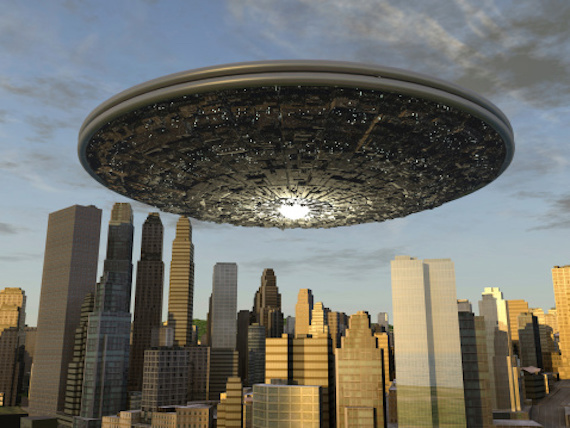 Nevertheless, despite such criticism of the videos, many still believe it to be good UFO evidence, and some have gone and taken it all to new levels of weirdness. One of these is a couple by the name of Lee and Brit Elders, who believe that the UFO appearance during the eclipse was not only aliens, but that the whole incident was prophesized by the Mayans more than 1200 years ago. The Elders claim that through various ancient documents they have deduced that the Mayans predicted that the aliens would arrive in the area of Mexico City on July 11, 1991 as harbingers of world change and “cosmic awareness through encounters with masters of the stars,” to usher in “a new era that will rise on the ashes of the one before.” The couple even made a whole series of videos talking about this, titled Messengers of Destiny, Masters of the Stars, and Voyagers of the Sixth Sun, and it all revolves around this supposed ancient prophecy and the July 11, 1991 UFO over Mexico City. Printy has a lot to say about the Elders, and does not mince words at all when he says of what he calls their “pure bunk for sale”:

Not only do the Elder's state that Venus was a UFO, but they also make a profound statement that the Mayans predicted the arrival of the UFOs! Exactly when did the Maya predict such an event? The Elders state there are several ancient documents that state this. However, is there any basis for such a claim? The Elders rarely, if ever, give details. They seem to expound on new age mysticism trying to link statements from various documents in order to create some strange prediction to meet their needs. Are their statements correct? Are these source documents accurate? The credibility of the Elders is important to understand how accurately they represented the UFOs shown in the videos.

Despite a wealth of evidence that Venus was the likely culprit in many of these videos, the Elders went out of their way to create a story that describes alien visitation. The mixing and matching of Mayan and Aztec myths and then trying to make some form of prediction made by the Maya is another case of the Elders trying to deceive the viewers of real facts. The Mexico City eclipse UFO story is nothing but a new age myth generated by a couple of con-artists, who rely on the viewer to be uninformed and willing to believe the most ridiculous claims. The Messengers of Destiny/Masters of the Stars/Voyagers of the sixth sun prediction is nothing but a new age myth designed to make money! 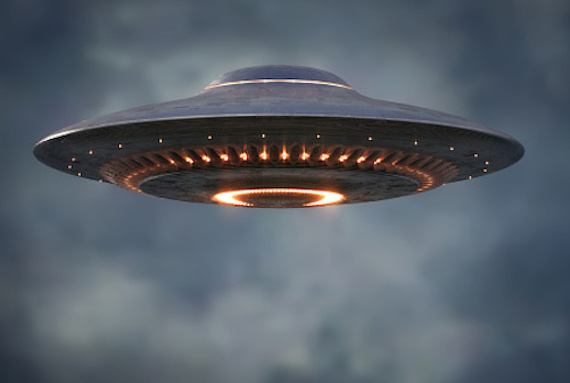 The Mexican eclipse UFO has also been the source of conspiracies, such as one that states the U.S. government knew about the event in Mexico, but tried to suppress it so that the public would not panic, which is supposedly why the story failed to produce even a blip in the American news. According to a report from the site Cool Interesting Stuff, there was a Kremlin report that supposedly not only mentions this, but also that the incident of July 11, 1991 in Mexico City put the Americans on alert for “a “war” against UFO’s based on or near the Continent of Antarctica.” The site says:

A report circulating in the Kremlin prepared for President Medvedev by Russian Space Forces (VKS) 45th Division of Space Control says that an upcoming WikiLeaks release of secret US cables details that the Americans have been “engaged” since 2004 in a “war” against UFO’s based on or near the Continent of Antarctica, particularly the Southern Ocean. According to this report, the United States went to its highest alert level on June 10, 2004 after a massive fleet of UFO’s “suddenly emerged” from the Southern Ocean and approached Guadalajara, Mexico barely 1,600 kilometers (1,000 miles) from the American border. Prior to reaching the US border, however, this massive UFO fleet is said in this report to have “dimensionally returned” to their Southern Ocean “home base”.

The fears of the Americans regarding these Southern Ocean UFO’s began, this report says, during the unprecedented events of July 11, 1991 (referred to as 7/11) when during the Solar Eclipse these mysterious aircraft appeared by the hundreds over nearly all of Mexico, even their Capital city. Most notable about the events of 7/11 were that as millions of Mexicans were watching on their televisions the National broadcasts of these UFO’s over Mexico City, the American media refused to allow their people to view it.

Is there anything to this? What was going on here with this incident? Was this an otherworldly presence, celestial gods on some mission to fulfill a Mayan prophecy, or merely the planet Venus and mass hysteria? How can we account for so many sightings? Were they all misidentifying a mundane phenomenon? Whatever the case may be, the July 11, 1991 UFO flap over Mexico City has gone on to become one of the most widely witnessed and most videotaped UFO encounters there is, and it remains a curious case in the annals of ufology.