They have been called “America’s Stonehenge,” yet it’s a good bet the average American has never heard of the Georgia Guidestones, has no idea where they are in Georgia, can’t tell you when they were erected or by whom, and probably doesn’t care to find out. That may have changed this week when a yet unidentified person or persons destroyed and damaged at least two of the six large granite slabs (five vertical and one a capstone) with an explosive device. Why anyone would do this may actually be less mysterious than the history of the stones themselves. Let’s take a look at both.

“The GBI and Elbert County Sheriff’s Office are investigating an explosion that destroyed the Georgia Guidestones near Elberton, GA. The preliminary information indicates that unknown individuals detonated an explosive device at around 4:00 a.m. on Wednesday, July 6th.”

The Georgia Bureau of Investigation tweeted the initial report on the destruction of the Georgia Guidestones and local and national media sources immediately picked up the story and included before and after photos of the monument (see them here.) Elbert County is located in the northeastern part of the state and Elberton is the county seat. Elerton is known as the granite capital of the world” – a fact that will play an important part in this story. A witness told local station WYFF that she lives five miles from the site and heard the explosion at about 4 a.m. Other witnesses claim they also felt the ground shake. Photos (more here) show rubble where one of the vertical stones had stood and damage to the capstone which had been positioned above it. This is not the first time in the past few weeks that the local media has been to the site of the Georgia Guidestones.

“For decades, the Global Luciferian Regime has seeped its way into our Government. They demoralized us with humiliation rituals as they tore down our historical monuments, persecuted our children, locked us down in our homes, and forced us into becoming walking science experiments through a global vaccination program. They erected statues spelling out the exact plans they had for us, and today we the people of Georgia, say no more. It's time for us to return the favor. On my first day as Governor of Georgia, I will move to DEMOLISH the Demonic plans of our enemy. The Satanic agenda is NOT welcome in our state. Support my fight by contributing, and watch as I turn the Georgia Guidestones into dust!”

That comes from the gubernatorial campaign website of Kandiss Taylor, a Republican who included destruction of the Georgia Guidestones as part of her platform. Taylor received just 3.4% of the vote in Republican primary, coming in third and losing by more than 70 points. Why would a politician and at least some Georgia residents call these stones “satanic” and want them destroyed – a move that may have inspired the bombing? For that, we need to look at the history and mystery of the Georgia Guidestones.

The story begins in June 1979 when a man named ‘Robert C. Christian’ asked the owner of the Elberton Granite Finishing company to quarry, cut and sell him and "a small group of loyal Americans" some of the world’s finest granite to build a monument that would function as a compass, calendar, and clock capable of "withstanding catastrophic events." ‘Christian’ – he later admitted this was not his real name – had purchased land for the monument, which he claimed he and his group had been planning for 20 years, from farm owner Wayne Mullenix. Elberton Granite Finishing accepted the order, built and engraved the stones to Christian’s specifications, and unveiled the Georgia Guidestones on March 22, 1980, to a crowd estimated at up to 400 people. The monument is on the highest point in Elbert County and is oriented to track the sun's east-west migration year-round – a slot on the west side lines up with the sun on an equinox or solstice, a hole in the center support stone lines up with the North Star, and a hole in the capstone focuses a sunbeam on the center column and at noon points to the day of the year. However, it is the guidelines for the “Age of Reason” engraved on the 19-foot-tall stones in English, Spanish, Swahili, Hindi, Hebrew, Arabic, Traditional Chinese, and Russian that generates the most controversy and, in some cases, outright hatred. 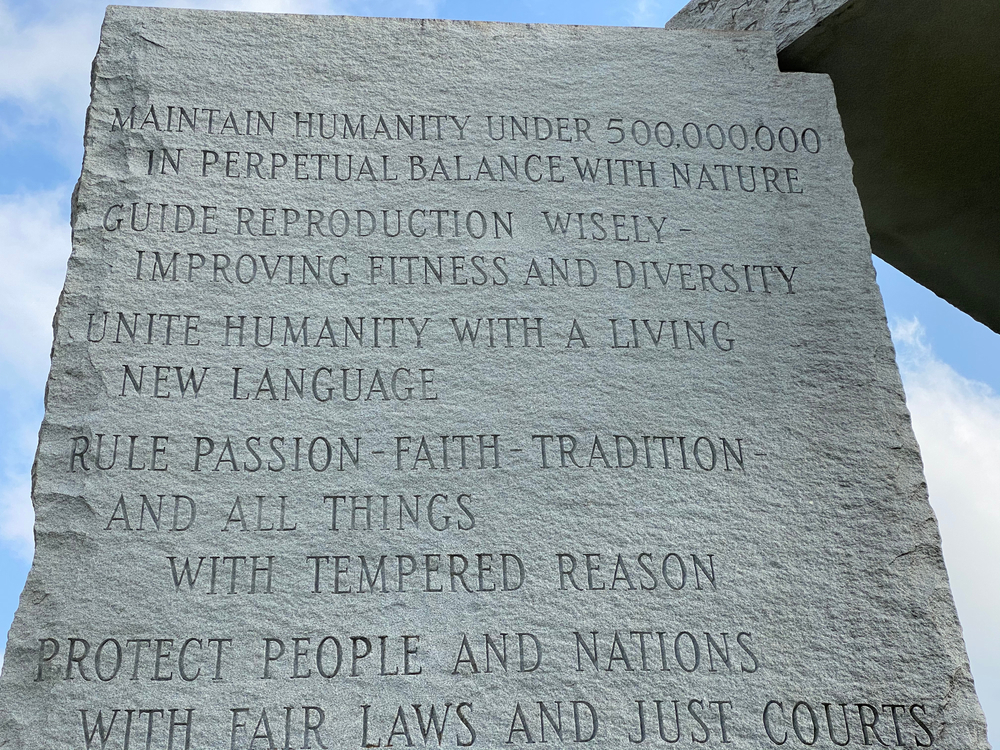 Those guidelines have a New Age resonance to them, but there is plenty to upset a wide variety of groups. The “Maintain humanity under 500,000,000 “ sounds like severe population control on a planet of 4.5 billion. “Guide reproduction wisely” is highly controversial in the U.S., as a recent Supreme Court ruling has pointed out. “Unite humanity with a living new language” sounds to many like a one-world government and language. By comparison, the rest of the guidelines seem pretty tame. While religious groups were offended, ufologists were excited when one noticed the monument formed an ‘X’ from above and could be a guidepost for an alien landing site.

It didn’t help that ‘Richard C. Christian’ never revealed his true identity, allowing conspiracy theorists to theorize to their hearts’ content who he might really be and what non-Christian organization he represents. One theory suggested he represented a “a Luciferian secret society” and the monument had a "deep Satanic origin" and was an equivalent to the Ten Commandments for the New World Order. The fact that the Georgia Guidestones are in a remote area and are little known to the general public didn’t stop those who see them as satanic symbols from bringing them the exposure they so despised. Rather than mentally changing the channel and ignoring them, they inspired people like Kandiss Taylor to call for their destruction, inspiring others to do just that.

As of this writing, the persons responsible for destroying part of the mysterious Georgia Guidestones have not been apprehended and the Georgia Bureau of Investigation and the local law enforcement agencies appreciate any tips. The monument is currently under constant surveillance. There is also no word on the future of the Guidestones – R.C. Christian hasn’t been heard from in a while and may be deceased. Elbert County owns the American Stonehenge and, despite its value as a tourist attraction, may have finally crossed the “too much trouble” line.

The mystery of the Georgia Guidestones has taken a new turn … but it’s far from over.