It's a fact of life that people lose things. Maybe you've misplaced your keys, dropped your wallet somewhere, or lost your remote control in your house. It happens, no one is perfect. Yet there are some occasions where people seem to lose some pretty important things, sometimes even dangerous things. Here we get into a case of the time the U.S. military lost a nuclear weapon off the East Coast of the country, which still hasn't been found and which has the potential to cause great harm.

On February 5, 1958, a B-47 bomber piloted by Air Force Col. Howard Richardson took off on a simulated combat mission from Homestead Air Force Base in Florida, aiming to act as a mock Soviet bomber. This was a pretty serious mission because this plane was carrying ordnance of the most serious kind, in the form of a 7,600-pound Mark 15 nuclear bomb. At about 2:00 a.m., an F-86 fighter accidentally rammed the bomber at 39,000 feet off the coast of Georgia while on its own training mission to intercept it, badly damaging the B-47 and causing the F-86 to completely disintegrate, its pilot Lt. Clarence Stewart barely managing to eject and parachute to safety. The right wing of the B-47 had been badly mauled by the collision, its fuel tank blown away and one of its engines dangling and useless, and the plane was careening out of control.

As Richardson struggled to keep the massive plane in the air, he radioed Hunter Air Force Base in Savannah and desperately asked them for permission to enact an emergency landing, as well as to contact Strategic Air Command (SAC) headquarters for instructions on what to do with the bomb aboard, hoping that he could jettison it to lighten the load of the limping aircraft and avoid the danger of what might happen if the plane were to crash with it on board. There was no immediate response, and so Richardson made a judgement call and jettisoned the bomb in the waters off Tybee Island near Savannah, Georgia. After this he came down for a hard emergency landing at Hunter AFB, only managing to stop the plane’s out of control skidding by deploying an emergency parachute. Although it seems that he should have been fired for dumping a nuclear weapon so close to a major population center, he was promoted, placed in charge of improving the safety of the country’s entire nuclear weapons arsenal, awarded the Distinguished Flying Cross for his heroic landing, and was inducted into the Sandia Laboratory Hall of Fame. The Navy meticulously scoured the area for the bomb in a massive search for more than two months, involving divers, dozens of boats, and hundreds of personnel equipped with cutting-edge technology but they never found it, ultimately declaring it “irretrievably lost.”

How dangerous the bomb actually is remains murky. At first U.S. officials tried to ease public concern by claiming that the bomb lacked a plutonium trigger, and that the "nuclear capsule" (physics package), used to initiate the nuclear reaction, had been removed before its flight aboard the B-47. This would be the official story for decades, allowing the residents to sleep in peace, that is until 1994, when a declassified document was released on 1966 a closed-door meeting of the U.S. Congressional Joint Committee on Atomic Energy investigating nuclear accidents, which contains Congressional testimony by Assistant Secretary of Defense W.J. Howard, who was considered the world’s foremost authority on nuclear weapon safety at the time, and who described it as a “complete weapon,” fully armed, complete with a nuclear capsule and plutonium trigger. If this is true, then the bomb is no joke, capable of a catastrophic explosion a hundred times more powerful than those dropped on Hiroshima and Nagasaki during World War II, capable of obliterating a large swath of the Georgia and South Carolina coasts. The Air Force and the former pilot of the plane at the time of the incident, the retired Col. Howard Richardson, continued to deny that the bomb contained any plutonium, but even if it did not it still poses a threat because even if it does not have a plutonium trigger it would still contain weapons-grade uranium and 400 pounds of conventional explosives, which could still make a pretty big boom and poison the water, potentially entering the food chain and endangering the population of the entire East Coast. To this day no one is sure what the real status of the lost weapon is, but there are not a few people who are rather concerned about it.

One of these is retired Air Force Lt. Colonel Derek Duke, who has spent years trying to track the missing nuke down. In 2004 he made headlines when he claimed to have narrowed down the possible location to an area approximately the size of a football field, and as evidence used Geiger counter readings showing secondary radioactive particles four times what would occur naturally. The U.S. Air Force waved this away as merely readings from monazite deposits, which is a mineral that is naturally radioactive, even carrying out their own analysis of the area that they claimed proved as much. In response to Duke’s continued urging for the government to find and remove the bomb they have repeatedly reiterated that it has no plutonium trigger and is relatively safe as long as it is left alone. They also said that even if the bomb was fractured, the toxic uranium in the weapon is so dense it would not drift far from the bomb casing. 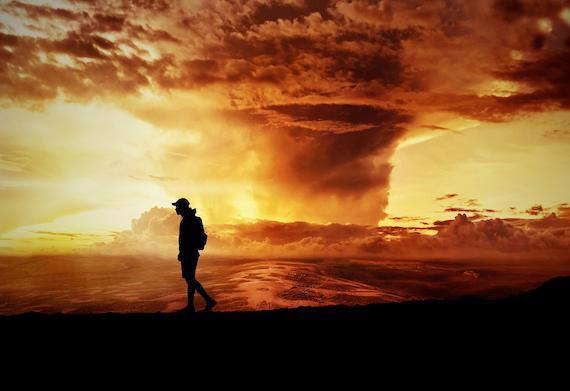 Duke doesn’t buy it. He believes that the military would not have used so many resources in the initial search if the nuke wasn’t fully armed and operational, and has also pointed out that Robert McNamara, who was the United States Secretary of Defense at the time, would have most certainly thoroughly reviewed and approved the Congressional report stating that the nuke was fully armed before signing it. He also has the testimony of former Sgt. Howard H. Dixon, who was in charge of loading nuclear bombs at Hunter from 1957 to 1959 and said “never in my Air Force career did I load a nuclear weapon without installing a nuclear capsule in it first.” The Air Force continue to deny it to this day, and Duke has continued his crusade to find it and raise public awareness of the potentially catastrophic beast slumbering in the nearby waters.

One theory that has made the rounds is that the bomb might have been whisked away by a Soviet submarine, and even that the government possibly knew this, their initial efforts to search for it a subterfuge and cover-up. Supporting this bold claim is the testimony of two local teenagers, who reported to the Coast Guard and the Office of Naval Intelligence that not long after the bomb had been lost they had been on a boat in fog and had seen a submarine lurking about. They claimed to have even asked one of the sub’s crewmembers for directions and were able to make a sketch of the submarine, which matched Soviet submarines of that era. The U.S. government has dismissed this as a conspiracy theory, stating that the water where the bomb was dropped is not deep enough for that type of submarine.

Just what happened to the Tybee Island nuke? Why is it that it was never found despite such a massive search and such urgency? Where is it? What is the reason for the government's continued insistence that everything is just fine? Indeed, just how dangerous is it? Are we talking a 400 pound bomb enough to blow up a ship or crack the aquifier, or is it a full blown weapon cabable of annihilating a good portion of the Eastern seaboard? Is it still down there or do the Russians have it? There are no clear answers to any of these questions. A nuke is missing right off the coast of the U.S., so it sure does seem like something you'd want to find and not have just lying out there, but for now no one knows just where it is or what it is capable of. Sleep tight.

About That New Nessie Story: Why I Still Say the Loch Ness Monsters are Paranormal