The extinct Tasmanian tiger gets much more attention these days than it ever did in its waning days of existence … assuming the carnivorous marsupial predator also known as the thylacine is not extinct but hiding deep in the bush of Tasmania or Australia. While much Internet and mass media time has been given lately to the quest to bring back Australia’s apex animal using DNA from preserved specimens, CRISPR gene editing and an egg and womb from a close (but far from very close) marsupial relative, many people continue to claim sightings of thylacine on both Tasmania and the mainland, while scientists not involved in the de-extincting projects continue to research it for clues about its unusual characteristics and what they can do to prevent the extinction of other Australian marsupials. Both of those were on display last week as a bush walker in Adelaide Hills recorded a video of what could be a Tasmanian tiger while a researcher studying thylacine pelts found an unusual characteristic – their fur glows in the dark. Could this be the solution to finding more for bush walkers to record – or verifying what they‘ve witnessed? 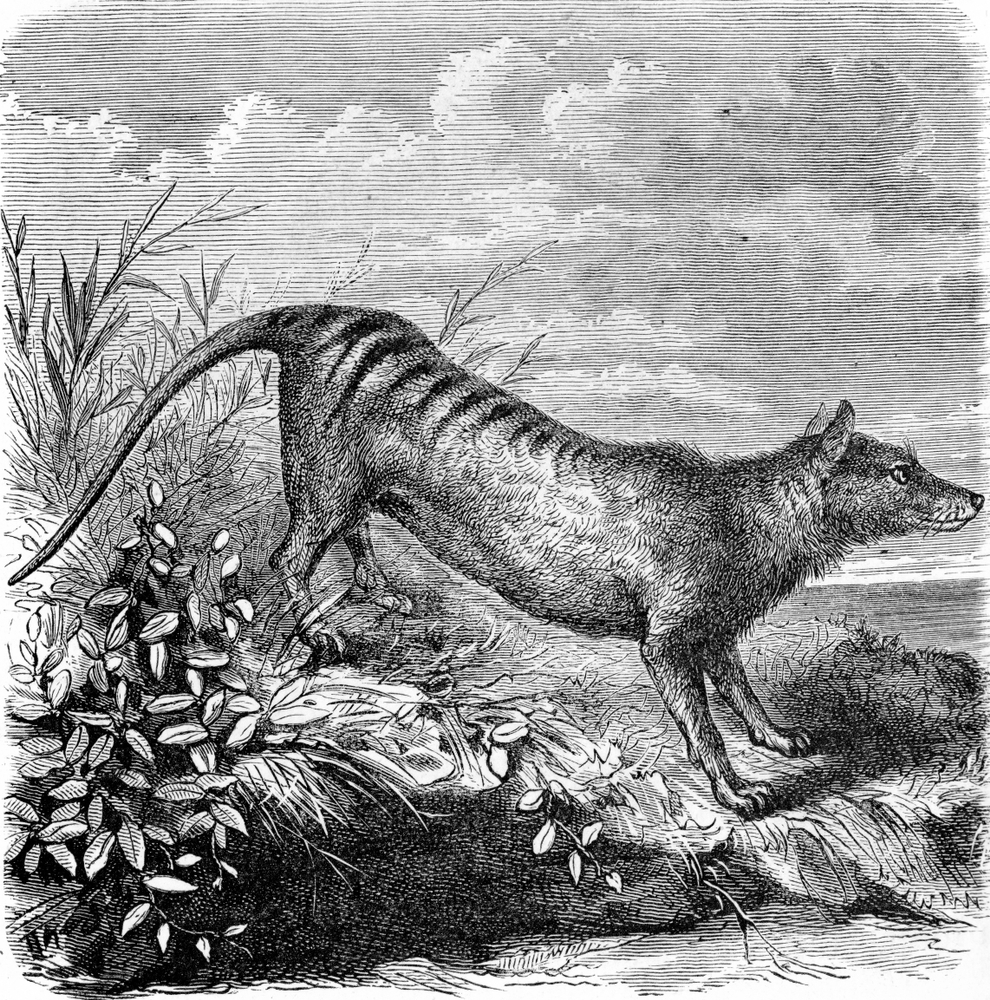 "We saw this thing starting to move across the road, and to start with, it's a bit strange, you sort of go through a bit of a thought process in your head, and it's like, oh, that's a bit of a weird looking kangaroo."

Jessie Milde told ABC News she and her family were walking in Belair National Park in the Adelaide Hills when they saw a strange creature with a stranger gait moving through the bush. Like many Chupacabra sightings in the U.S. Southwest, Milde thought this was just a skinny, possibly mangy, dog, but it move closer and her sister decided it was nothing like a dog or a kangaroo, but more like a Tasmanian tiger.

Fortunately for the rest of us, Milde was quick with her cell phone and manage to capture the creative on video. (Watch it here.) Should this sighting be added to the growing number of people posting on social media of their encounters with strange creatures in the national park?

“It's got all the hallmarks of a fox with mange; it's lost a lot of hair off its tail I think [and] it's got very large ears like a fox. The movement when scooting to the left is a quick walk breaking immediately into a trot exactly like small canids and cats do. It's very unlike any marsupial I know, including the walking thylacine in the old movie. I've seen a number of these sorts of videos and they're usually [filmed] with a phone, so they're not the definition not excellent. It's a pity there's not more detail but that's what makes these interesting, isn't it? The lack of detail."

Ouch! That brutally honest assessment of the video comes from Nick Mooney, a Tasmanian wildlife biologist and honorary curator of vertebrate zoology at the Tasmanian Museum and Art Gallery. Mooney knows thylacines and he knows marsupials that could be mistaken for thylacines – he’s debunked other videos as sightings of pademelons (a small kangaroo) and spotted quolls (a catlike marsupial). And, while he seems to severely admonish anyone who thinks an animal that went extinct in Australia 2,000 years ago might still be alive and in hiding and points out that no videos taken so far provide “irrefutable evidence,” he still encourages everyone to got out into the wild and look anyway in the hope that this will bring attention to other endangered species. That’s an excellent idea. Should they bring a fluorescent lamp? For the answer to that question, we turn to David Thurrowgood, the owner and Senior Conservator at Applied Conservation Science Pty Ltd., where he has over twenty years’ experience working with irreplaceable cultural objects, iconic objects of international importance … like thylacine pelts.

"It is glowing. I can't believe it's glowing.

The glow David Thurrowgood is so excited about is coming from hairs from one of the world's best-preserved thylacine pelts, which he has placed under a fluorescence microscope. Why would he do this? In 2020, some researchers discovered that platypus hairs glowed in the dark when placed under a black light. It was soon determined that the fur of many marsupials also glow in ultraviolet light. Zoe Kean and Lucie Cutting of ABC News wondered if thylacine fur would glow as well. Not surprisingly, access to the rare preserved pelts is extremely difficult and those possessing them were loathe to spare a hair to couple of reporters. Fortunately, Thurrowgood was not. He has in his possession a pelt from the 1920s from Archibald Robertson, a taxidermist and collector in New Zealand who kept it a dark drawer for decades. After his death, his family kept it there until 2020 when Thurrowgood arranged for it to be purchased by the National Museum of Australia. No light is needed to see the bright colors of the thylacine in this high-quality pelt. Fortunately, Thurrowgood was aware of the fluorescence discoveries and was anxious to see if the extinct Tasmanian tiger exhibited the same characteristic as its living relatives. 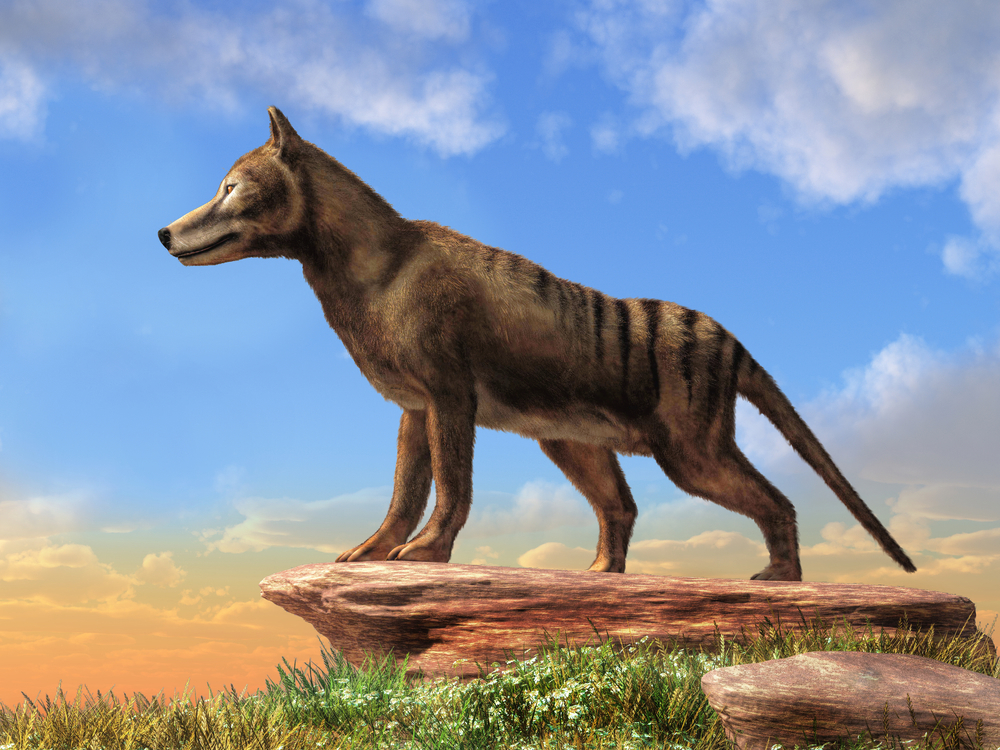 "I can see all these tiny spots of glow right where the pigment particles are. That is exciting — that is such a result."

Thurrowgood’s comment attests to both the commonality of the marsupial hair fluorescence and the high quality of the pelt. It turns out Dr. Kenny Travouillon, of the Western Australian Museum has also been studying marsupial fluorescence and comments to ABC News that this discovery may help give more insight into how so many animals seem to be able to see in the ultraviolet spectrum and how they use this ability to communicate with their fur. While these marsupials don’t see each other glowing in the dark, they do see colors that we humans don’t.

That brings us back to the video of a possible thylacine. Would a black light at night be able to identify a creature as a Tasmanian tiger or a mangy fox? Thurrowgood says he’s intrigued by the idea but seems to agree with Mooney that the thylacines are extinct.

Or are they? Don’t stop wandering in the bush and looking and keep that cell phone charged and ready!

Cryptozoological Creatures and Us: When Things Get Deadly