A Bizarre UFO Explosion Over Nevada

On April 18, 1962, at around 8:15 p.m., local time, witnesses in Oneida and Cuba, New York, saw a strange object streaking westward across the sky, variously described as looking like a red or blue fireball, “a red flaming sword,” a very bright white light with a bright white trail, or a long cylindrical shape like a cigarette. The object was soon tracked by NORAD, who then alerted the Air Defense Command and at the time no one could figure out what it was, and as they debated over what to do the object began its strange and inscrutable journey west, which would only end after it had crossed ten states and with an apparent explosion of a possible alien craft.

As the object streaked from east to west, it would be witnessed by thousands of people whose testimonies soon showed that this was no ordinary meteorite or anything known at all. The mysterious object was often seen to change speed and altitude, with some witnesses reporting that it would pass just a few hundred feet from the ground. It also would occasionally surge ahead at great speed, only to slow back down again, and its trail would sometimes change colors from a bright yellow to blue. In some cases, it was reported as casting off sparks, emanating a “whooshing” or a “gasping sound,” and there were some reports of the object causing several loud booms and flashing lights as it passed over to disappear from view. As people got a closer look at it they could see that it was very strange, indeed, with one witness even claiming that he had been able to discern a series of square windows on the object almost hidden in the glow of it. 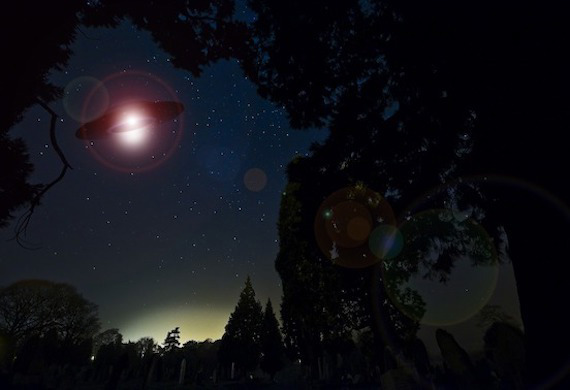 Other witnesses along its course described the object as demonstrating some very odd behavior as well. In Eureka, Utah, it was seen to pass low and cause cars to stall and street lights and retail store lights to go out. One witness by the name of Bob Robinson claimed that as he drove along with his friend Floyd Evans near Nephi, Utah, it had approached his truck to hover over them momentarily, causing it to malfunction and stall, with the vehicle suddenly springing back to life when it was gone. It was also seen to allegedly arc down and land in a remote area around 10 miles southwest of the town and stay there for a full 42 minutes, during which time it was reported as causing a service disruption at a nearby power plant before taking off again to continue its journey west, after which power to the plant was mysteriously restored. Some witnesses also claimed that there were “military men” snooping around the area right after the incident, looking around and questioning people.

Several law enforcement personnel saw the object over Utah, including a Sergeant E. C. Sherwood of the Utah Highway Patrol, who saw a bright blue light that he claimed seemed to explode over him while shooting off “a cloud of white sparks.” Indeed, a number of people in the area reported a roaring sound and the loud bangs of what sounded like explosions as the object passed over, in some cases sounding like a series of twenty of thirty explosions strung together. Joseph Benini, the police chief at the time, also saw a bright light and heard what sounded almost like an artillery shell passing overhead. At the time the thing was being seen by pilots in the air as well. A Bonanza Air Lines pilot said that the light passed right beneath his aircraft, and Troop Carrier Squadron, reserve AF pilot and civilian Attorney at Law Captain Herman Gordon Shields saw it as he was flying a Fairchild C-119 Flying Boxcar two miles west of La Van, Utah. He would describe the incident as follows:

We were approximately 25 degrees of bank on the aircraft and we had turned for about 30 degrees to a heading of about 098 or 100 degrees, somewhere in there, when it began to get very bright in the, cock- pit. The illumination was from above. It built up slowly. My first impression while the intensity was low was that it was the landing lights of another aircraft. Of course, when the intensity increased this was ruled out automatically. The cockpit was illuminated from above. In the C-119 aircraft there is an instrument panel in the middle of the cockpit up above on the ceiling of the cockpit. The light source was coming from this area that was blanked out, in other words, straight behind this instrument panel because neither Lieutenant Larson, who was in the fight seat nor I saw the source of the illumination.

We continued the turn. The light intensity increased until we could see objects [on the ground] as bright as day for a radius of five to ten miles from the aircraft. This would probably be a diameter of twenty miles or so. Objects on the ground, on the hills around us, were clearly distinguishable. Colors were distinguishable. It was as bright as daylight. The intensity of the light diminished faster than it had increased. After the light had decreased in intensity we were still looking for the light source, and I noticed an object to my left between the wing and the lower part of the fuselage of the aircraft against the hills. By this time the light had decreased so that the hills were dark. It was night again.

And this object which I saw was illuminated. It had a long slender appearance comparable to a cigarette in size, that is, the diameter with respect to the length of the object. The fore part, or the lower part of the object was very bright, intense white such as a magnesium fire. The second half, the aft section, was a clearly distinguishable yellowish color. I would say the object was just about divided in half, the fore part being intensely white, the aft section having a more yellow color to it.

In the meantime, the object was being tracked on radar and fighter jets were scrambled at Nellis Air Force base to investigate, and as the object approached Arizona there were jets put in the air from Luke Air Force Base as well. It would eventually pass over ten states and was seen as far west as Reno, Nevada and California, before it apparently was reported as changing course to head back east. Then, at a location somewhere over the Mesquite Range in Nevada, around 70 miles northwest of Las Vegas, after being tracked and traced for a total of 32 minutes, there was reported a spectacular blinding flash bright enough to light up the streets of Reno like noonday and be visible from five states, followed by a thunderous boom that coincided with the object disappearing completely from radar at an altitude of 10,000 feet, suggesting that whatever it was had blown up in a massive explosion. Local law enforcement was swamped with calls, and in the wake of the explosion the area was reportedly crawling with military personnel, but the official story is that nothing was found. 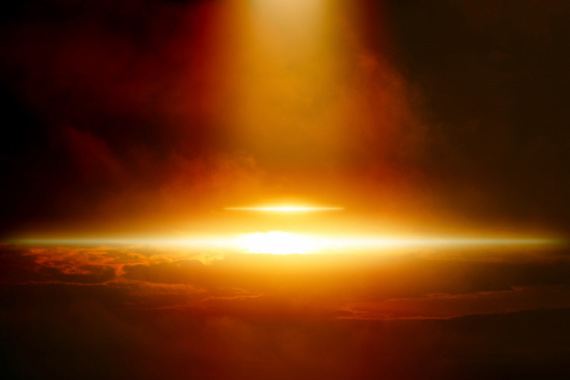 In the aftermath of this strange series of events, the Air Force would do everything they could to wave it all away. They claimed that it had been anything from a meteor to a U2 spy plane or a weather balloon. They would send in J. Allen Hynek, with Project Blue Book, along with Lieutenant Colonel Robert Friend, who quickly concluded after a basic, cursory investigation that the object had been a bolide, or a very bright, exploding meteor. Dr. Robert Kadesch, an associate professor of physics at the University of Utah, would also vocally concur with the bolide theory. Although officially the object would end up being labelled as “Insufficient Data for a Scientific Analysis,” the military considered it case closed and brushed it away. Although the chief of criminal investigation at Hill Air Force Base, Douglas Crouch, would do his own investigation and find that the witnesses were “logical, mature persons” and come to the conclusion that they had seen a tangible object that was not an aircraft of balloon and that there had also been “no unusual meteorological or astronomical conditions present,” the Air Force nevertheless closed the book on the whole thing and moved on.

This is the way things would stay for decades, and it was mostly forgotten about except for a brief mention by author Frank Edwards about the crash near Las Vegas in his 1964 book Strange World. It was not until UFO researcher Kevin Randle took a closer look at it when the Air Force declassified their “Blue Book Files” in the 1990s that it would become clear how truly strange the whole incident was. Randle would thoroughly scour these files and track down witnesses, illuminating the once forgotten case and ultimately coming to the conclusion that what was seen cannot be explained by meteors, aircraft, or weather balloons.

This was a UFO event witnessed by thousands of people across ten states, many of who would be categorized as traditionally reliable witnesses such as law enforcement, radar operators, pilots, and military personnel, all of whom were sure that what they had seen was no meteor, balloon, or known aircraft, and it had been tracked by several radar installations. The object changed course and altitude, slowed down and sped up, even landed at one point, and also appeared on radar for 32 minutes, so it seems likely it was no meteor. There were never any reports of downed or missing aircraft of any kind, no U2 planes or weather balloons scheduled to be in the area at the time, and no military tests in the area at the time either. The various descriptions of the object’s appearance also don’t fit any of those explanations, and no known aircraft would be flying so erratically, so what are we actually dealing with here? What was this thing and what became of it? How can the brilliant flash and explosion be explained? Did whatever it was blow up and why? Was there some sort of cover up involved? These are all questions we may never have answers to, and it remains a strange, but more little-known case of a mass UFO sighting and possible UFO crash.