When compiling the list of worst days in the history of the Earth, the day most historians would put at the top of the list would be the one when a massive 6.2-miles-wide (10 km) asteroid slammed into the Gulf of Mexico and triggered the disasters that caused the Cretaceous–Paleogene mass extinction event when 75% of plant and animal species on Earth became extinct, including all non-avian dinosaurs. And yet, just like in votes for GOATs (Greatest Of All Time) in major sports, some might not vote for the Tom Brady of bad days … possibly January 23, 1556 – the day the Shaanxi Earthquake (or Jiajing Great Earthquake) killed 830,000 people in China. Well, 66 million years later, new data has been discovered that may warrant a recount for the Chicxulub event. Researchers have found evidence of another huge crater off the coast of West Africa that may have hit Earth on the same day, causing even more destruction on the other side of the planet. NOW is that day 66 million years ago the Serena Williams of bad days?

“Scrolling through this data at the end of 2020, we came across a highly unusual feature. Among the flat, layered sediments of the Guinea Plateau, west of Africa, was what appeared to be a large crater, a little under 10km wide and several hundred metres deep, buried below several hundred metres of sediment.”

Uisdean Nicholson, an Associate Professor of Geoscience at Heriot-Watt University and co-author of a study on the crater in Science Advances, explains in The Conversation how this discovery was one of those that happen when you’re looking for something else. In this case, Nicholson and his team were looking at research data to reconstruct how South America separated from Africa after the breakup of the Gondwana supercontinent. The data came from a new technique called “seismic reflection” in which pressure waves are beamed down to the ocean floor and devices detect the energy that is reflected back up. Unexpectedly, buried deep below the seabed sediment, was a formation that ticked off all of the qualifications of a crater made by a massive space rock – its 6-mile width, the height of the rim, and the chaotic distribution of rocks around it. Before printing posters that read, “I’m not saying it’s an asteroid impact, but it’s an asteroid impact,” they performed their due diligence.

“We did consider other possible processes that could have formed such a crater, such as the collapse of a submarine volcano or a pillar (or diapir) of salt below the seabed. An explosive release of gas from below the surface could also be a cause. But none of these possibilities are consistent with the local geology or the geometry of the crater.”

Still not thinking this was associated with the Chicxulub crater, the team used the data to model the creation event. One interesting simulation showed the crater forming from a asteroid 400 meters (1300 feet or a quarter of a mile) in diameter hitting an ocean that was 800 meters (half a mile) deep. The simulation showed a fireball entering the atmosphere that was visible from hundreds of kilometers away, the eruption of an 800-meter water column, the vaporization of the space rock as well as a wide circle of sediment around it. That energy release was the equivalent of the energy of 5,000 megatons of TNT and estimated to be 1,000 times the Tonga eruption in early 2022 which may have been felt in outer space. (An illustration of the best guesstimate of the impact can be seen here.) The force was the equivalent to a magnitude 6.5 or 7 earthquake, which triggered underwater landslides and a train of tsunamis. Above the water, the loudest air blast in history would have awoken the dinosaurs … many of whom didn’t have much time to do anything else. 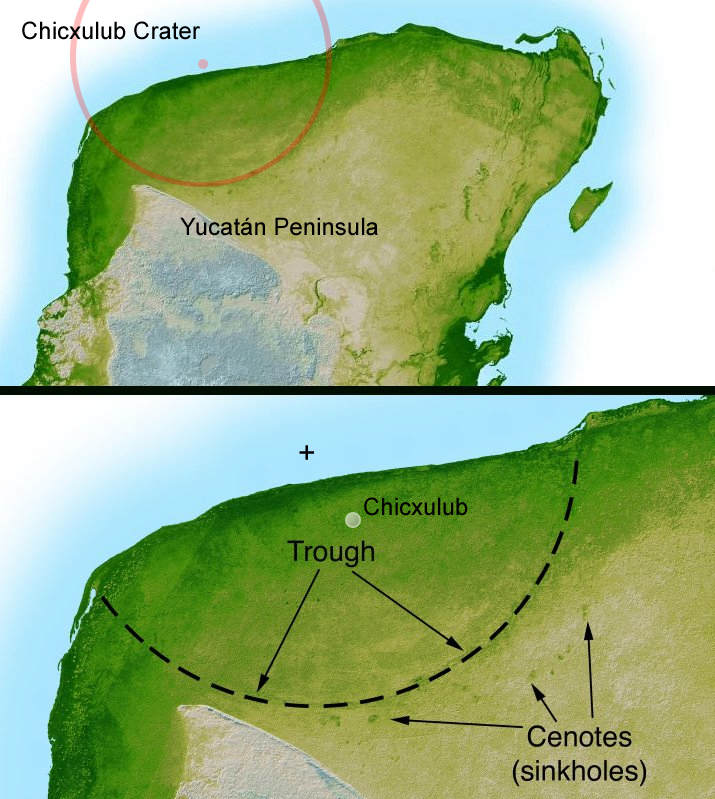 “One of the most intriguing aspects of this crater is that it is the same age as the giant Chicxulub event, give or take one million years, at the boundary between the Cretaceous and Paleogene periods 66 million years ago. Again, if this really is an impact crater, might there be some relationship between them?”

The estimated impact dates of what the researchers now call the Nadir crater (after the after the nearby volcano Nadir Seamount) seem to have happened too close to be a coincidence, but that was one possibility. A more enticing one is that the Nadir and Chicxulub asteroids were part of a larger parent space rock whose breakup flung them at Earth together, causing near simultaneous impacts. This possibility would answer the question many scientists have about the Cretaceous–Paleogene extinction event – how did so much destruction occur so quickly on both sides of the planet? A “little sister” event would explain that very nicely. In fact, astronomers saw a similar event happen in 1994 when the Shoemaker-Levy 9 comet broke into large fragments on its way to colliding with Jupiter.

But … there are other possibilities. A parent comet or asteroid could have been pulled apart by Earth’s gravity but the rocks stayed in orbit, falling to the ground in events separated by a longer period of time. Or Nadir and Chicxulub could be “cousins” formed from a collision way back in the asteroid belt, staying there for eons before pulling out of their spaces and heading to Earth, either alone or as part of an asteroid shower. The study points out that this also happened during the Ordovician period over 400 million years ago when a large number of meteor impacts occurred in a very short time interval.

The answer to the question on everyone’s mind is that they don’t know which of these possibilities is the real one. The only way to solve it is to dig into the Nadir crater to first determine if it is indeed an asteroid crater by finding minerals or diamonds that are only formed by the shock of impact. If they prove that, then the samples need to be compared to those from Chicxulub to see if they match. Don’t hold your breath but Nicholson and his team have submitted a proposal to drill the crater through the International Ocean Discovery Program.

While you’re waiting, here’s some thing to worry about. Nicholson says the asteroid in the model looks suspiciously like the Bennu asteroid currently in near-Earth orbit and considered to be one of the two most hazardous objects in the solar system, with a one-in-1,750 chance of collision with Earth in the next couple of centuries. That would certainly be a bad day -- possibly a new GOAT bad day.