For decades people have claimed disturbing encounters with supernatural humanoids that, despite looking very different, all have one thing in common: their maniacal smiles. Collectively, they are known as the Grinning Man – a cousin, perhaps, to the notorious Slenderman. They include paranormal clowns that haunt peoples’ bedrooms, ancient woods, and areas of paranormal activity. Then, there are the supernaturally Smiley-Faced ghouls who have been linked to mysterious deaths and disappearances in the United States. As for Indrid Cold, he is an enigmatic character who played a significant role in the Mothman wave that dominated Point Pleasant, West Virginia from 1966 to 1967. Cold’s crazed and eerie grin never left him, something which provoked fear among those who encountered him. He still surfaces to this day – much to the cost of those who cross his path.

The Hat Man is a Man in Black-type being that appears in shadowy form; not unlike the infamous Shadow People – to whom the Hat Man is almost certainly related. On many occasions, however, the Hat Man appears in regular, human form, with a black beard and a black suit, and wearing a long overcoat or a cloak – always black, too. Most noticeable about this creepy figure is, of course, his hat. Sometimes, it’s a fedora, other times it’s an old style top hat. Occasionally, it’s more like a cowboy hat. But, regardless of the kind of headgear, it’s always present and always black. Many of the encounters occur while the victim is in a distinct altered state – that of sleeping. Angie had just such an encounter in Leominster, Massachusetts, on September 6, 1994, as she told me late on the evening of October 8, 2014.

Her reason for contacting me was due to the fact that, quite out of the blue, she had suddenly begun to dream of the events of twenty years earlier – and dream of them almost every night for a couple of weeks. Very much like those people unfortunate enough to be confronted by the somewhat similar Slenderman, Angie was sleeping when the mysterious thing disturbed her sleep by manifesting in her bedroom and staring at her with a menacing grin on its pale, ghoulish face. For a few moments, Angie was unable to move. As she finally broke the spell of paralysis, however, the Hat Man was gone.

Jaye P. Paro was a woman who had a number of bizarre, UFO-themed encounters in May 1967, in upstate New York. At the time, she was a host on Babylon, New York’s WBAB station. On one particular day Jaye decided to take a walk. It was barely dawn, and the town in which she lived was still shrouded in shadows. As she walked passed a particularly dark alley, a Woman in Black loomed into view, as if from nowhere, or from some nightmarish realm. Then, out of the blue, came a black Cadillac, the absolute calling card of the MIB and the WIB. It came to a screeching halt next to the two women, and out of one of the rear doors came an unsettling-looking character. It was a man dressed in a dark grey suit, with what was described as an “oriental” appearance, and who sported a disturbing, almost maniacal, grin. The driver seemed almost identical in appearance. The man with the fearsome grin shook Jaye’s hand and said, “I am Apol.” Jaye said that holding Apol’s hand was like holding the hand of a cold corpse. Moving on...

“Christine” grew up in West Texas and was confronted on more than a few occasions by one of the weirdest and creepiest offshoots of the MIB mystery – namely, the so-called “Grinning Man." "I haven’t told a lot of people about it," said Christine. When I first saw the person I was about 1 or 2 years old. I have a very long memory. It was like the typical thing that you hear: it was this man who would stand in the doorway of my bedroom. I remember standing up in my crib and holding onto the bars and he wore a fedora and a tan raincoat and black trousers, shiny shoes and black leather gloves. His face wasn’t like someone who had been burned, but he just stood there and would grin. There was nothing friendly about the way he was grinning. It was horrible. Emotionless, didn’t blink. And he came off and on for a few years. " Now, onto another definitive creep:

His name was Woodrow Derenberger, but everyone called him “Woody.” It was shortly after 6:00 p.m. on an evening in November 1966, when Woody Derenberger was driving home from his job as a sewing machine salesman at J.C. Penny’s in Marietta, Ohio to his farmhouse in Mineral Wells, West Virginia. The ride home was overcast and dreary. It was misting a light rain. As Derenberger came up on the Intersection of I-77 and Route 47, he thought that a tractor trailer truck was tailgating him without its lights on, which was unnerving, so he swerved to the side of the road and much to his surprise, the truck appeared to take flight and seemed to roll across his panel truck. To his astonishment, what Derenberger thought was a truck was a charcoal-colored UFO without any lights on. It touched down and then hovered about 10 inches above the road. Much to Derenberger’s surprise a hatch opened and a man stepped out who was dressed in dark clothing and who had a “beaming smile.” There was something about that grin, however, that sent chills down Derenberger’s back. 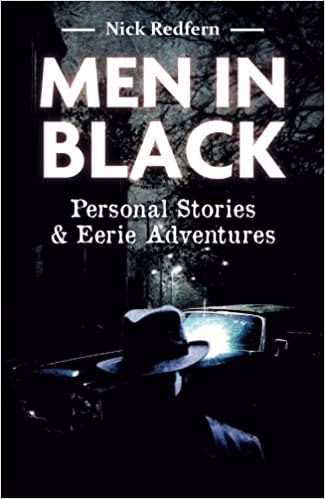 Angie had just such an encounter in Leominster, Massachusetts, on September 6, 1994, as she told me late on the evening of October 8, 2014. Her reason for contacting me was due to the fact that, quite out of the blue, she had suddenly begun to dream of the events of twenty years earlier – and dream of them almost every night for the last couple of weeks. Very much like those people unfortunate enough to be confronted by the somewhat similar Slenderman – the ultimate Internet meme come to life in Tulpa form - Angie was sleeping when the mysterious thing disturbed her sleep by manifesting in her bedroom and staring at her with a terrible grin on its pale, ghoulish face. For a few moments, Angie was unable to move. As she finally broke the spell of paralysis, however, the Hat Man was gone. I was hardly surprised when Angie added that, as a result of the new dreams, she now feared a return visit from the man in the hat. I tried to stay on the positive side of things and told Angie to try and dismiss such worries from her mind. But, to this day it would not surprise me if Angie gets that second, feared encounter, as my words really did not seem to comfort her, even when we chatted again, some weeks later on.

Here's another eerie example: In the summer of 1987, the Maxwell family spent a week vacationing in and around San Francisco, staying with friends in Menlo Park. On their way back home, they traveled along California’s famous Highway 101, which provides a panoramic view of the Pacific Ocean, and for mile upon mile. They chose to drive through the night, when the highway would be at its least busy; thinking that it would be to their benefit. How completely and utterly wrong they were. As fate would destine to have it, after a couple of hours of driving, the family of four spotted a strange light in the sky. It was described as a bright green ball of light, about the size of a beach-ball, one which paced their car and that stayed with them for a couple of miles, at a height of around sixty feet. There was nothing frightening about the encounter. Rather, they were all amazed and excited. It wasn’t long, however, before things got very disturbing.

The day after the Maxwell family got home was a Sunday, meaning they had an extra day before returning to work and school. It was while one of the teenaged children was sat on the porch and playing music on an old Walkman that she caught sight of a man on the other side of the road. He was dressed completely in black, aside from a white shirt. He even wore black gloves, on what was a bright, summery day. The girl was particularly disturbed by the fact that the man sported an odd smile and was staring right at her. So unsettled was she that she went back into the home and told her father of what had just happened. He quickly went to the door but – no surprise – the MIB was gone. When Mr. Maxwell told the story to me – down the phone, on January 3 – the anxiety in his voice was as clear as it was eerie to hear. I have seen and heard that kind of anxiety so many times. Too many times, I would suggest. And, regardless of the particular location, almost always in relation to the Men in Black. And, finally:

In the summer of 1968, a man named Alistair Baxter – who had a lifelong interest in tales and legends of lake monsters and sea serpents – traveled to Loch Ness, Scotland and spent nine weeks armed with a camera and binoculars, while quietly and carefully monitoring the loch for any unusual activity of the beastly variety. Baxter never did see the elusive creatures of Loch Ness, but he did speak with numerous people who had seen them. And, after being at the loch-side almost constantly for five weeks, a decidedly unusual event occurred. Baxter was awoken in the middle of the night by a curious humming sound that was emanating from a bright, small, ball of light about the size of a football that – at a height of around fifteen feet from the ground – was slowly and carefully making its way through the surrounding trees that enveloped Baxter’s modestly sized tent.

Suddenly, and without any warning, the ball of light shot into the sky to a height of several hundred feet and hovered in deathly silence over the still waters of Loch Ness. For reasons that Baxter was at a loss to explain, he felt an overwhelming urge to go back to sleep and the next thing he knew it was daybreak. But the strangeness had barely begun. Shortly after breakfast three men in black suits appeared outside of Baxter’s tent seemingly out of nowhere and proceeded to ask him if he had seen anything unusual during the night. He replied that he hadn’t, at which point one of the three men then turned to his two colleagues and made what Baxter said was “a strange smile.” The man turned to face Baxter. “We might return,” said one of the mysterious men in black and all three departed by simply walking off into the woods. They never did return, perhaps fortunately for Baxter. And, finally, should you see one of those grinning monsters, keep away. Forever.