In both the 1963 science fiction novel “Planet of the Apes” by French author Pierre Boulle and the 1968 film of the same name, gorillas were at the lower end of the ape caste system – performing the jobs of the military, police, armed hunters and laborers. In the real world, gorillas are still at the top of the ape chart when it comes to physical strength, but chimpanzees – the intellectuals and scientists in the novel and movie – are also considered to be the smarter apes, being used in higher degree of difficulty experiments like space travel. Chimps are often thought to have the intelligence of human toddlers, which also helped put them ahead of gorillas and orangutans. That changed with Koko, the famous and beloved western lowlands gorilla who learned a simplified form of American Sign Language (ASL) – ultimately being able to understand more than 1,000 signs and form them into comprehensible phrases and sentences. Koko even made sounds on a recorder – not necessarily learning how to play music but showing that she could learn how to change her breathing in order to blow into the instrument. That particular skill came into play in another gorilla study released this where captive zoo gorillas at Zoo Atlanta displayed the ability to make specific sounds in order to gain the attention of zookeepers. Did any of them as for a weapon and a uniform?

“We were observing gorillas in the enclosures, and we were noticing a strange vocalization that was happening at specific times. I study Western gorilla civilizations in the wild, and the work that we were observing was not something that I had heard before.”

Roberta Salmi is a biological anthropologist at the University of Georgia and lead author of a new study on “novel attention-getting vocalization in zoo-housed western gorillas” published this week in the journal Plos One. She and her colleagues in the study were at Zoo Atlanta because zookeepers there were reporting strange sounds coming from many of their lowland western gorillas (Gorilla gorilla gorilla) at what seemed to be regular times and related to certain activities. Not surprisingly, some of those activities were related to food. When Salmi and her team heard the attention-getting sounds (AG), they immediately likened them to “a sound between a sneeze and a cough that we named “snough”.” Working with zookeeper Jodi Carrigan, Salmi tells Gizmodo that the snoughs appeared to be a sound that the gorillas were making to get the attention of nearby zookeepers. The snoughs were usually single sounds, but occasionally a gorilla made a series of two to four in a row. Salmi, Carrigan, and student Monica Szczupider devised an experiment to determine why these big apes were snoughing.

To keep the experiment non-disruptive, the gorillas were tested in their own cages either in isolation or in pairs, and mothers were tested with their infants. The gorillas were able to see, smell, and communicate vocally with other gorillas in the area. The zoo staff followed their regular schedules and procedures when caring for or feeding the gorillas. Because Salmi and her team suspected the snoughs were relating to food, they devised three test conditions: only keeper (K), only food (F), and keeper holding food (KF).

Visual and audio recordings were made during the tests and the results were just as the zookeepers had claimed – during the “keeper holding food (KF)” tests, the gorillas made the snough sounds ”with a big open mouth.” According to Salmi, this is extremely rare behavior and a unique sound for gorillas. And it wasn’t just one -- half of the gorillas in the test snoughed and continued to snough in the direction of the zookeeper until they received a reaction from them. Even more intriguing was the fact that the researchers never once saw any of the gorillas snough at any other gorillas

It's easy to understand why the gorillas associate zookeppers with food – the tough question for the researchers was why all of the gorillas made the same half-cough-half-sneeze ‘snough’ sounds to get their attention. Salmi told Gizmodo she believes it has to do with the other reason why zookeepers pay attention to the gorillas.

“We can only speculate that a sound somewhere between a cough and a sneeze would instinctively attract the attention of caregivers, whose responsibilities include the daily monitoring of their gorillas’ health.”

The study notes that three of the snoughing female gorillas at Zoo Atlanta are related and may have learned the sound and its affect on zookeepers from each other. One of these females has been moved to another zoo and is being observed to see if she teaches gorillas there to snough.

The last question the researchers had was whether the snough was an invention of the lowland western gorillas of Zoo Atlanta or if other captive gorillas make the same sounds … and for the same purpose. A survey of staff from other zoos gave a surprising answer – the snough had been heard at other zoos and was used by both sexes of gorillas. In all, 18 out of the 39 responses noted the presence of the snough by gorillas that had no interaction with the Zoo Atlanta snoughing apes – indicating that the sound could have been invented independently multiple times. This means gorillas in general observe their keepers, link them to food and health, and logically create sounds that are fake illness symptoms, resulting in an appropriate response from the keepers that the gorillas then use to get what they really want – food.

So, gorillas have learned American Sign Language and have now created the beginnings of their own language for communicating with humans. We learned this as the result of running experiments on them that were recorded on cameras. If you’re looking for how close we might be to a real life “Planet of the Apes,” think of this -- the first words uttered by an ape to a human in the 1968 film were said by a gorilla photographer: 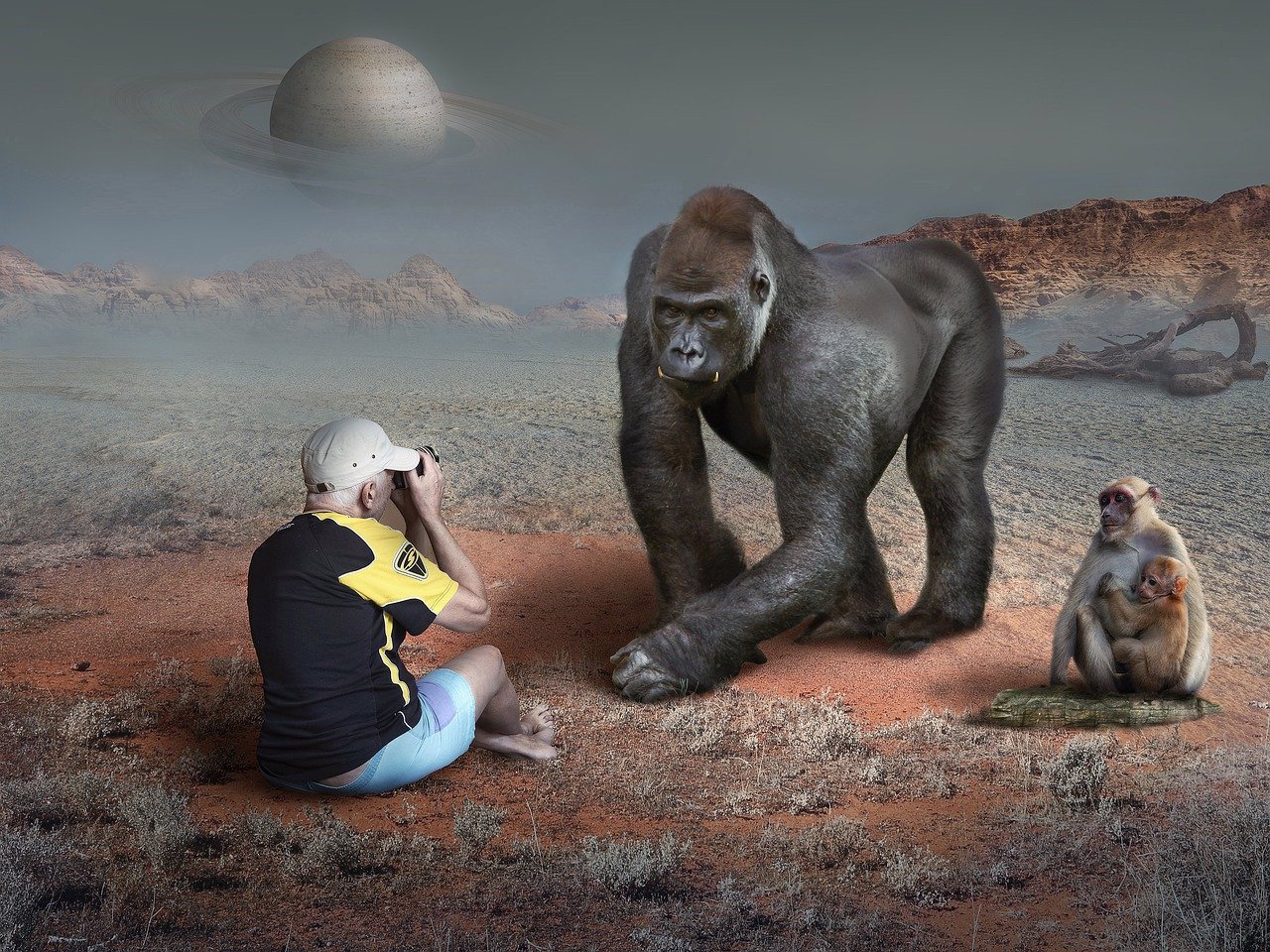