Lost Civilizations and the Mysterious Giant Stone Head of Guatemala

The area of archeology has often been peppered with strange stories of lost artifacts and lost cities or civilizations. It seems increasingly less likely in modern times, with our insatiable exploration of the wilds of our world, that such places should exist, yet such stories capture the imagination. The thought of some ancient structure out there in some exotic place beyond our knowledge waiting to be discovered is an irresitable lure, offering a potential look into a weird history that skirts the periphery of what we think we know. One such bizarre artifact was allegedly found in the jungles of Guatemala, and has gone on to spark speculation on lost civilizations and aliens.

In 1987, a Guatemalan doctor of philosophy, lawyer and notary, as well as a well-known ufologist and conspiracy theorist by the name of Rafael Padilla Lara, received a strange photograph that seemed to defy explanation. It showed what appeared to be an immense stone head sitting within a tangle of jungle, slightly tilted up as if it were staring at the sky, and with it was a written description simply stating that it had been found by a landowner in the 1950s in the rainforest somewhere in Guatemala. The surprising thing about this stone head was that it seemed to have rather strange features such as thin lips and a large, sharp nose, as well as an overall Caucasian appearance, which would definitely be anomalous for the fact that it did correspond to any of the pre-Hispanic races that were native to the Americas, as well as its apparent age because the native people would have had no contact with outsiders. Of the whereabouts of this alleged stone head there was no mention, and Padilla apparently became obsessed with finding it, believing it’s strange appearance and massive size to possibly be evidence of a lost civilization or even ancient contact with otherworldly beings.

Padilla would write a short article on the ancient astronomy publication Ancient Skies, and it might have from there disappeared into obscurity and the mists of time if it hadn’t been for an explorer and author by the name of David Hatcher Childress. After stumbling across the article and reading it, Childress tracked Padilla down and was able to obtain a copy of the mysterious photograph. To him it was such a potentially groundbreaking discovery that he flew down to Guatemala in 1990 to personally meet with Padilla, but he would be met with disappointment. Upon meeting, Padilla would claim that after years of searching he had finally found the stone head on a jungle property 10 kilometers from a small village in La Democracia in the south of Guatemala, but the head had long been disfigured and partially destroyed by anti-government rebels. However, although the statue was missing its eyes, nose and mouth, Padilla was able to take measurements, claiming that it was between 13 and 20 feet high. Much to Childress’ disappointment, when he asked to be taken to the site, Padilla claimed that it was too dangerous, and that the whole area saw frequent fighting between government forces and revolutionaries.

Childress would never get the chance to make an excursion to the actual site, but he still became deeply obsessed with the idea of this mysterious giant stone head out there in that jungle. He compared the head to another type of large stone heads found in the region, called Olmec colossal heads, which are stone representations of human heads sculpted from large basalt boulders by the Olmec civilization of ancient Mesoamerica, and ruled them out as an explanation. According to Childress, whereas the Olmec heads typically measured 3.8 to 11.2 feet, Padilla’s stone head was a whopping 13 to 20 feet in height. Childress also pointed out that the Olmec heads were more crudely carved, and that they featured unmistakable facial characteristics of the region’s natives, whereas the mystery head was quite obviously Caucasian. To him this was evidence of some ancient lost white civilization in the jungle.

Even when it was discovered by American archaeologist Lee A. Parsons that the Padilla head was likely a monument carved out of soft volcanic pumice by a farm administrator in 1936 as a tribute to his dead wife, Padilla did not buy it. Parsons described the monument as a dead ringer for the Padilla head, and said that it merely looked more ancient because it had lost its plaque designating it as such to the hungry jungle, the wet climate, and the soft, porous nature of the volcanic rock had made it weather away in the elements to seem older than it was. Indeed, Parsons had even visited the site back in the 70s and gave ample evidence that Padilla’s photo was the same monument, but Childress insisted that this was wrong, and claimed it was part of a big government conspiracy to cover it all up. Childress would spend the rest of his days trying to prove his wild theories of an ancient lost white race in the jungles of Guatemala, but he never actually went to the site himself and most real archeologists agreed with Parsons. For most people it was case closed, and the mystery sort of faded into history, but some people would not let it lie. 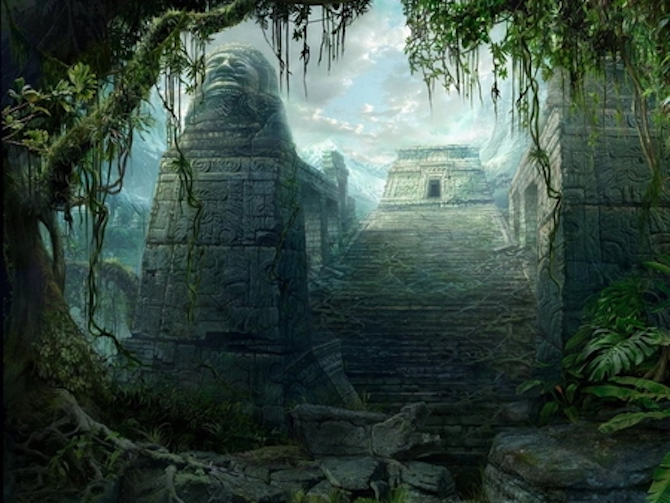 For years there were sporadic articles coming out that claimed the stone head was a real mystery and proof of some ancient lost civilization, and then in 2011, the son of the late actor Raul Julia, Raul Julia-Levy, made a documentary called Revelations of the Mayans: 2012 and Beyond, in which he investigated the stone head and interviewed a Guatemalan archaeologist by the name of Hector E. Majia, who claimed that not only was it the work of a lost civilization, but of aliens, and said of it:

I certify that this monument presents no features of Maya, Nahuatl, Olmec or any pre-Hispanic civilization. The building style is not consistent with the civilizations that inhabited the southern coast of Guatemala prior to the arrival of the Spaniards. It was created by an extraordinary and superior civilization with astonishing knowledge of which there is no record of its existence on the planet, a civilization that settled in southern Guatemala and from there spread its light and knowledge to the hunter-gatherers who were its students and received its teachings.

And so the legend of the stone head remained alive, and still does. Yet, there are many red flags here. One is that Padilla never took any new photos when he allegedly visited the site, merely descriptions of the head shot up by revolutionaries. Another is that the main champion of the stone head as a real archeological oddity, Childress, never actually did go to see the place for himelf and was working on potentially bogus accounts and bad information. It seems pretty obvious that this was a picture of a monument created in modern times that was dressed up to look like a true mystery by Padilla, but it has stubbornly remained circulating as a true anomaly. There is almost no doubt that this place has been made into a sort of jungle legend, but it still persists to this day, with many still claiming that it is real proof of an ancient lost civilization, and whatever the case may be, it shows that our hunger for such lost places knows no bounds.

The Strange, Hybrid Fish-men and Bird-men of Mesopotamian Art: Who Were They?