The USS Zumwalt is the most advanced United States Navy guided missile destroyer in existence today. Much larger than any other active destroyer or cruiser in the US Navy, the USS Zumwalt’s futuristic appearance is the result of a design that gives the ship stealth capabilities against radar detection and a wave-piercing tumblehome hull to dramatically reduce drag and increase fuel efficiency. Powered by an integrated electric propulsion (IEP) system and managed by a much smaller crew that previous warships, the USS Zumwalt was created to be the next generation in fighting ships and to strike fear in enemy navies. While that may be true, a recently released video shows that one enemy laughs in the pointed face of the USS Zumwalt -- drones. The video, released by the U.S. Navy, shows as many as six mysterious drones or unmanned aerial systems (UAS) swarming the USS Zumwalt in the waters off the coast of Southern California in April 2019. Who … or what … controls these mysterious aircraft that seem fearless against the latest and best of the U.S. Navy?

“The War Zone received the video via the Freedom of Information act as part of our ongoing investigation into reports of drone swarm incidents that occurred near Navy vessels intermittently throughout 2019 off Southern California.”

Credit for convincing the U.S. Navy to release the video goes to the intrepid team at The War Zone/The Drive, which has obtained a number of such videos, photos and data files via its relentless requests under the Freedom of Information Act. The War Zone is responsible for obtaining a number of videos of drone swarm events around naval warships off the coast of California in July of 2019, but the bulk of those have been around conventional warships and aircraft carriers … not the next generation in fighting vessels.

“The incident occurred at approximately 8:30 PM Pacific Time on April 24th 2019, around 17 nautical miles from the Marine Corps base at Camp Pendleton in international waters. During the event, the USS Zumwalt reported that as many as six unknown unmanned aerial systems (UAS) were seen operating nearby at altitudes ranging from 300 to 1000 feet.”

An altitude of 300 feet is a mere stone’s throw to a ship like the USS Zumwalt – almost within swatting distance. In fact, one of the drones was reported to have crossed directly over the deck of the USS Zumwalt. That should make them a piece of cake to identify, right? Well, take a look at the video yourself here and see if you can identify them. Finished? What do you think? As The War Zone points out, all you can see in this nighttime, low-resolution video is a group of bright lights flying in a rectangular formation – the lights are green and white with an intermittently blinking red light in the center. That’s even worse than most UFO/UAP videos. Fortunately, the USS Zumwalt had a SNOOPIE Team -- Ship Nautical Or Otherwise Photographic Interpretation and Exploitation team – which immediately investigates and documents unusual UAS encounters such as this one. A chart showing the Zumwalt’s “Interaction with MULTIPLE UNK UAS” and a timeline of the events can be seen on The War Zone’s website. That chart includes another photo, a map showing the location of the USS Zumwalt at the time of the encounter, and a plot of the path of the drones superimposed on the path of the Zumwalt. All of this data adds up to what looks to be a very close encounter between the Navy’s latest warship and a swarm of unknown aerial phenomena.

“What is interesting is that they reported six drones, and they were 17 miles off the coast of Southern California. This tells me that these drones were likely launched from a boat and that this was a planned ‘mission’ because no one has six drones on a boat for recreational purposes.”

So, what did the USS Zumwalt encounter on the night of April 24th 2019? The War Zone asked an anonymous (by their request) drone analyst who suspected this was a military exercise using pre-programmed drones flying predetermined paths and hovering at selected locations. That did not impress the analyst as being the actions and maneuvers of “any advanced technology” – it could be done off-the-shelf, non-military, commercial drones. David Kovar, CEO of URSA Inc., a drone security company, agreed.

“Given the context of the narration and the briefing slide, the object could be a multi-rotor, likely a quad, UAV with running lights.”

While those analyses hint at ‘what’ these mysterious UAS are, they don’t indicate ‘whose’ they are. Earlier this year, the War Zone obtains photographs of UAP encounters in 2019 reported by the USS Kidd, USS Rafael Peralta, USS Russell, USS John Finn, and USS Paul Hamilton during weeks of maneuvers near California’s Channel Islands, and was able to identify the possible source of the swarms of drones  – the Hong Kong-flagged bulk carrier MV Bass Strait. In that group of photos, one image was labeled “Quadcopter style UAS.” Could the drones harassing the USS Zumwalt have been from a Hong Kong carrier too?

“The Chief of Naval Operations Michael Gilday previously stated that the Navy did not get to the bottom of similar incidents that occurred in the same region later in the same year.” 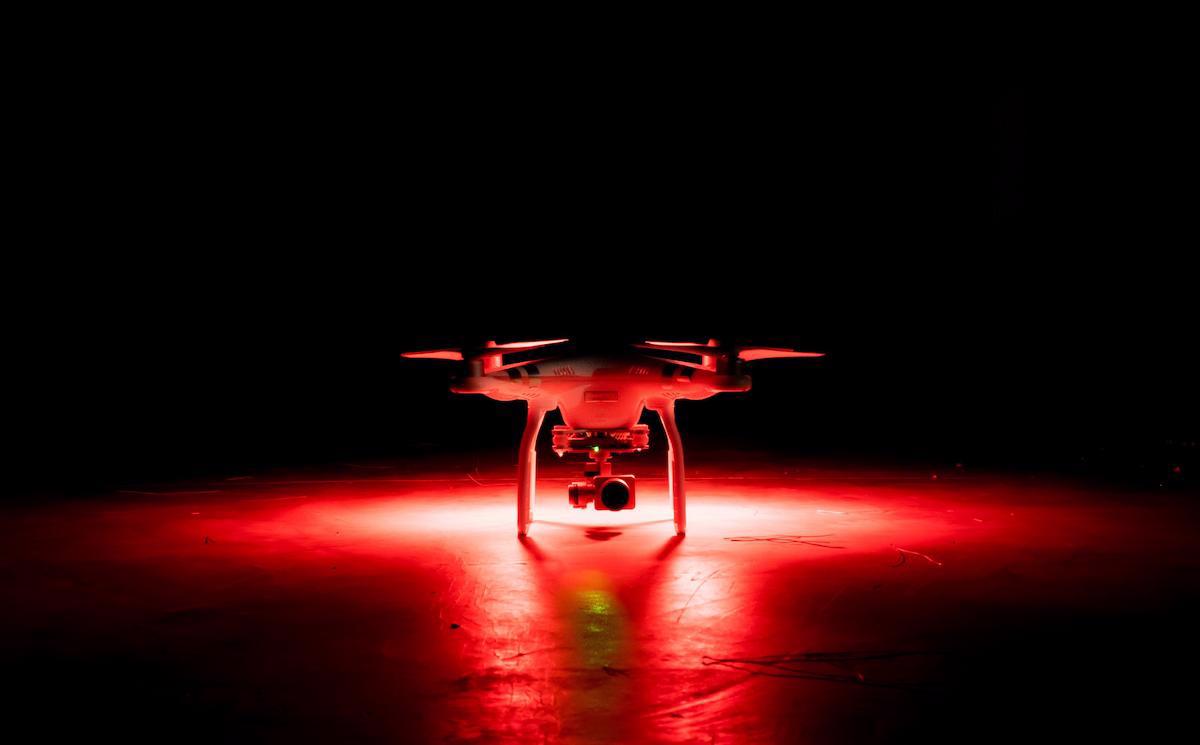 The War Zone received no response to requests for information on the identity of the drones’ operators – noting that not all drone swarms were linked to the Honk Kong vessel or any other ship. It also noted that the Naval Surface Warfare Center Crane Division held an event in July 2022 called “Silent Swarm 22” at the Michigan National Guard's National All-Domain Warfighting Center which tested “Electromagnetic Warfare (EW) employed on small multi-domain unmanned systems (UxS).” The logo of the exercise (these days, you can’t have an exercise without a logo for a patch) shows drones flying around a ship and, interestingly, reflections of the drones on the surface of the water. The War Zone thinks this is a wink to the biggest concern of Pentagon’s new UAP investigation department – transmedium or multi-domain UAPs.

As of this writing, no other information is available about mysterious, unidentified UAPs swarming the USS Zumwalt, the U.S. Navy’s latest stealth flagship destroyer. Kudos as always to the team an The War Zone.

Should we be worried?

When Snakes Were Beyond Huge: Real Monsters on the Rampage