We as a species thrive on hope. It is what drives us and allows us to tenaciously get through even our darkest times, to know that there might be a light at the end of the tunnel, a way out of even the most dire circumstances. It is this hope that has helped drive the belief in miracles, that divine powers might just be able to come down and save us from the inevitable, a shining ray in the dark. Some places in our world have managed to become beacons of such things, and one of these is an unassuming mountain hamlet in France, which is said to hold mystical powers and the ability to turn hope into reality.

Situated in the majestic Pyrenees of the Occitanie region in southwestern France is a quaint market town called Lourdes. The town of around 17,000 people is mostly just a hamlet like many others in the region, and was long mostly known for a fortified castle called the Château fort de Lourdes. Prior to the mid-19th century it was actually a pretty unremarkable place, but this would change with a series of events beginning in 1858, which would cause Lourdes to be known as a place of miracles and propel it to the position of being known as one of the world's most important sites of pilgrimage and religious tourism.

On February 11, 1858, a local peasant girl named Bernadette Soubirous, who was later canonized, was out collecting firewood with her sister and friend when she came across a beautiful young woman with a golden rosary praying. Bernadette went to her and prayed with her, after which she followed the mysterious woman to the Grotto at Lourdes. Here the woman revealed herself to be “The Immaculate Conception” the Blessed Virgin Mary, and told the girl that she was to dig in the dirt, where she would find a well of water with miraculous healing powers. From February 11 to July 16, of that year, Bernadette would claim to have met the Blessed Virgin Mary eighteen times, and sure enough would find this well and quickly demonstrate its powers with a woman named Catherine Latapie. In October of 1856, Catherine fell from a tree in her town of Loubajac, only a few kilometers from Lourdes, and severely damaged her right hand. The nasty spill fractured her forearm, causing ulnar nerve paralysis that left two of her fingers paralyzed. 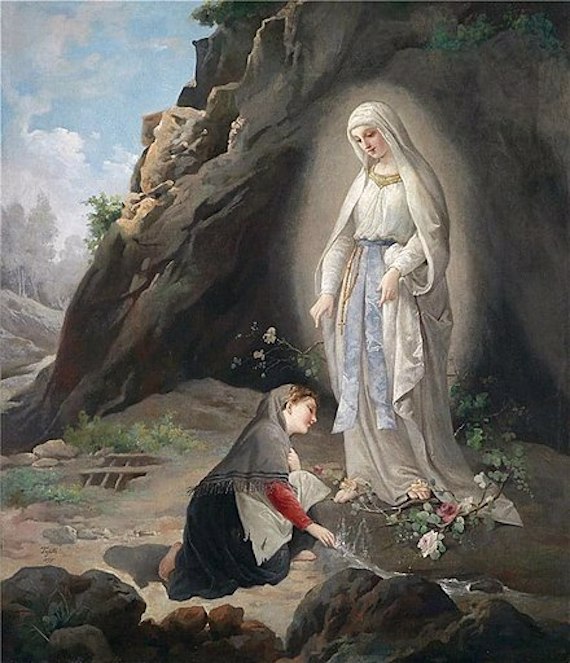 In late February 1858, Catherine woke in the night and heard in her head a voice telling her to go to the Grotto at Lourdes, and after many nights of this she finally went there in March of that year accompanied by her children. There she met Bernadete, bathed her hand in the well, and her paralysis vanished. A man named Louis Bouriette, who had been blinded by a mine explosion, saw this and immediately went to the well to wash his eyes, instantaneously restoring his sight. That same year, 2-year-old Justin Bouhort, who suffered from malnutrition, intellectual disability, and tuberculosis, was unable to walk and was not expected to survive, came to the well with his mother, made a full recovery, and even lived to attend St. Bernadette’s canonization in 1933. All of these would be officially declared true miracles by the Catholic Church and from there the town’s popularity spread far and wide.

Over the years there would be hundreds of such healings as pilgrims came from all over the world seeking help. All manner of injuries and afflictions have been supposedly miraculously cured at Lourdes, including blindness, deafness, paralysis, cancer, tuberculosis, even complete brain death, a myriad of incurable diseases and debilitating injuries all vanishing by using the Grotto’s well. There were so many of these healings taking place that Lourdes even instituted the Lourdes Medical Bureau in 1905, which has the mission of determining whether a particular cure is a complete, spontaneous, and immediate healing from a documented medical condition without the use of any treatments or medication and without any subsequent relapse that is truly unexplainable by science and thus a real miracle by the Catholic Church’s strict criteria laid down by the Vatican around 300 years ago.

Of the estimated thousands of healings experienced among the millions of pilgrims who have made the journey, 70 of these healings have met the criteria and have been classified as truly unexplainable real miracles. One very recent example of a recognized miracle at Lourdes involves 56-year-old Serge Francois,who made the pilgrimage to Lourdes with a left leg that had been left completely paralyzed and useless after complications from a surgery. In April of 2002 he went to drink from the well and his leg allegedly immediately was restored to full function, and this miracle was officially approved in 2011. The most recent of these occurred in 2008, when a French nun by the name of Sister Bernadette Moriau visited the Grotto looking to be cured of spinal problems which had rendered her wheelchair-bound and fully disabled since 1980, having undergone four unsuccessful surgeries and reliant on morphine to control her constant chronic pain. After attending a mass at the Marian shrine of Our Lady of Lourdes and being blessed, she claims she immediately felt something different, and would say of it:

I felt a surge of well-being throughout my body, a relaxation, warmth…I returned to my room and there, a voice told me to ‘take off your braces. Surprise. I could move.

Moriau would never need a wheelchair, braces, or pain medication ever again, and her miracle would be officially recognized by the Vatican in 2018. Is there anything to this, and what do real doctors think of these supposed medical miracles at Lourdes? Belfast doctor and ENT surgeon Michael Moran began volunteering at Lourdes in 1998, and in 2013 became one of the doctors at the Lourdes Medical Bureau tasked with evaluating such miracles. As well as studying for a PHD in cancer research at Queen's University Belfast (QUB), Moran is also an ear, nose and throat (ENT) registrar in the Belfast Trust, and he has seen some things at Lourdes that he truly can’t explain. He has said of one of these:

Another classic example of that is a gentleman from Italy who had a tumor of the pelvis and although you can see the destruction of the pelvic bone on x-rays which are available for the public to view in Lourdes, the bone actually re-grew, both in the pelvis and the femur in an anatomically correct way that would be very hard to explain.

When discussing whether he thinks there is anything truly miraculous going on or whether it is all down to the power of God, he stresses that doctors on the committee, which convenes once a year and is composed of about forty people from around the world who come from different medical specialties, backgrounds and levels of training, have to put their personal beliefs aside and just look at the evidence as carefully as they can. He explains more of his ideas and what the committee does:

From the committee's point of view, what we're really doing is what we currently can medically explain or not explain, so there's certainly things that have happened, not in Lourdes, that we can't explain also. Our role is really to discuss things that happened there at a specific time that people really do believe was related to their spiritual experience. For some, the fields of science and religion do not sit easily side-by-side.vI'm quite happy with both in the sense that I feel there's a role for both. I know not all scientists or medics would believe that, but I certainly have seen people get a lot of great spiritual relief from Lourdes. I myself have also had an overwhelming experience that you can't really describe because it's such a peaceful place and it's a place where the sick are really put first and it strikes you that if Belfast hospitals and hospitals around the world were like that all the time, then the world would generally be a better place.

Whether there are any true miracles or not, there have been fewer and fewer of them that have passed the committee’s criteria, with only four official miracles since 1978. Whether this is because the criteria have gotten stricter or the power of the Grotto is waning is anyone’s guess, but millions of desperate people still flock here every year looking for their own miracle. What is going on at this place? Is there some magic here or the power of God? Or is it all just tall tales or the placebo effect? For the many people who come to Lourdes, perhaps it doesn’t matter what the answer is. Whether there are any true miracles here or not, perhaps all they are looking for is hope.