There are many mystery creatures said to roam the remote wilderness areas of the world. Some of these are truly strange, surrounded by fantastic tales and folklore, and leaving practically no evidence behind except scattered sightings and maybe some tracks. To some, these may be purely mythical monsters too absurd to really exist, and without further evidence one may be inclined to brush them off without another thought. Yet, history is filled with such bizarre creatures that pushed through this murky haze of doubt, skepticism, and lore to show themselves to be real animals that were far from the mere legend they had been relegated to. This is certainly not a new sentiment, and the field of cryptozoology is rife with such legendary beasts that have lurked on the dark fringes of our understanding, but sometimes there turns out to be something true behind the tales, some real creature lying underneath all of the speculation, skepticism, and doubt. On occasion these mystery animals step out of the dark to make themselves known as genuine creatures. It is these cases that give cryptozoologists hope that maybe there just might be something to the tales, and that these may be more than just stories and tall tales. These are the cases that provide hope that we are not fully through with trouncing through the wild of our world, and we are far from cataloguing all of the creatures that inhabit it. One of the most famous of these is the time a hairy wildman in Africa went from being a fantastical traveler's tale to a real creature we take for granted today.

Reports of mysterious “wild men” have been reported from around the farflung edges of the world for centuries, encompassing everything from North America’s Bigfoot, to the Yeti of the Himalayas, to Indonesia’s Orang Pendek, and more. Yet as amazing as these stories may seem, history is not without precedent for these strange wild men being actually discovered and classified by science. The discovery of the western lowland gorilla and the mountain gorilla came on the heels of numerous mysterious tales from natives, sparse physical evidence, and obscure sightings that read like the hunt for Bigfoot, only in this case of course the mysterious creatures were eventually recognized by science as very real. For centuries, local tribes in Africa spoke of mysterious and primitive man-like creatures inhabiting the wilds that were variously known in the native tongues as “wild-men,” “ape-men,” “hairy men,” or “forest people,” as well as numerous other local names. The creatures were always described as enormous, powerful man-like beasts covered in hair, with some traditions calling them fierce, bloodthirsty savages with a penchant for kidnapping people and eating them. Encounters with the beasts by people from the outside world were not unheard of. Although long well-known by native tribes, perhaps the earliest account of these creatures by outsiders dates back to around 500 BC, when an expedition pushed forth along the Western African coast from the Phoenician merchant city of Carthage, led by Hanno the Navigator. The expedition was astounded to come across these wild men, which the locals called “hairy men,” and which Hanno would write of in his journals as gorillae, or “hairy people.” 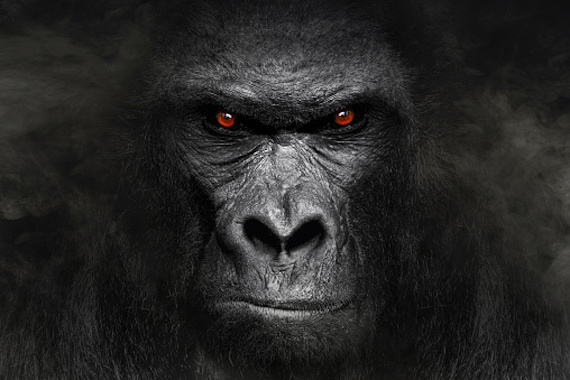 Further captivating reports would trickle in from early explorers of Africa over the years. In the 16th century, a British explorer by the name of Andrew Battel was captured in West Africa by the Portuguese, and it was during his capture that he would describe a pair of “man-like apes” that would slink from the jungle to approach the campfire when no one else was around. Reports like this enthralled both explorers and the public alike, who knew nothing of such large apes, although they were not taken very seriously by the scientific community. Such fantastic accounts would continue into later years as well, yet continued to be dismissed as rumor and tribal folklore by scientists and naturalists, who were highly skeptical of such farfetched tales.

These strange reports would come in for centuries with very little evidence to back them up, until in 1847 an American missionary and doctor in what is now known as Liberia by the name of Reverend Thomas Savage made a trek during which sickness forced him to stop off at Gabon. It was here where a Reverend J. L. Wilson would show him a curious skull, which seemed to be from some unknown ape far larger than a human being and which was allegedly from a “hairy man” that the natives claimed to be a ferocious beast and which they called the Enge-ena. The skull had allegedly come from an animal that had been killed by a slave kept by the tribe who was also a hunter in a harrowing battle to the death. So impressed was the tribe by this extraordinary feat of actually killing an Enge-ena that the slave had been immediately freed and the skull preserved. Perplexed, Savage, who was an avid amateur naturalist, sent off word of the incredible find to various institutions, such as the Bristol Philosophical Society and the Royal College of Surgeons.

Savage then went about hunting for skulls that would represent both male and female specimens, for the purpose of writing up a description of the animals along with the help of colleague Jeffries Wyman from Harvard Medical School. With the help of the local tribes, Savage was eventually able to collect two male and two female skulls, as well as a male and female pelvis, ribs, vertebrae and limbs. With these assorted remains, a comparison with the skull of a chimpanzee quickly proved that they were dealing with a totally new, very large species of ape. Savage and Wyman’s paper was then published in the December, 1847 edition of the Boston Journal of Natural History, and was the first scientific description of what they would name Troglodytes gorilla, later called Gorilla gorilla, or more commonly known as the western lowland gorilla.

As exciting as this discovery was, it was still not the last of the mysteries to be uncovered, as there were also numerous reports of “wild men” coming in from the vast, nearly impenetrable jungles of the African interior. One such account was given by an explorer named Du Chaillu, who in 1860 described coming across a tribe of huge hairy men in the jungle that he claimed were aggressive, murderous beasts far more powerful than a human being. Despite the fairly recent discovery of the western lowland gorilla, scientists at the time nevertheless were incredulous of such reports. 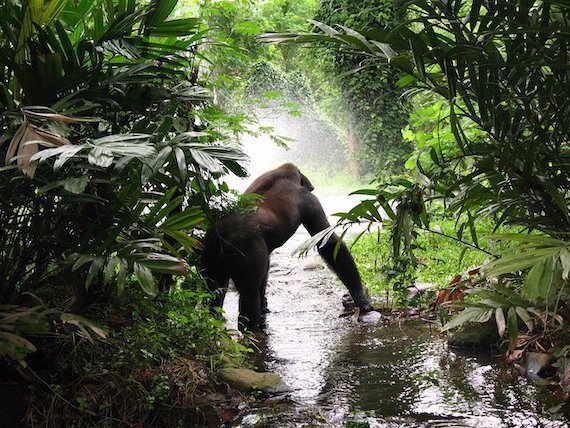 In 1902, German explorer Captain Robert von Beringe launched an expedition into the mountains of the Virunga region of Rwanda, what was then known as German East Africa, in order to check on the various remote German outposts scattered along the volcanic range, as well as to fortify relations with the local tribes. During the trek, it was decided to try and scale a mountain called Kirunga ya Sabyinyo, which was completely unexplored, uncharted territory at the time. It proved to be a perilous journey for the expedition, which struggled through thick, nearly impenetrable jungle while carrying heavy supplies, and later increasingly steep inclines, ferocious wind, and cutting cold. The men were finally able to reach a narrow ridge, upon which they erected a makeshift campsite which was precariously perched on the edge of steep cliffs dangerously buffeted by biting winds.

It was here at this campsite looming over the abyss and scoured by howling winds that a group of what were described as large “black monkeys” was spotted climbing over the crest of a volcanic ridge. Startled, the men opened fire on the creatures, hitting two of them to send them hurtling off the edge into a deep ravine. The expedition was able to retrieve one of the bodies using ropes, and after 5 strenuous hours the carcass of one of the beasts was lying before them. Beringe described the creature thus:

It was a big, human-like male monkey of one and a half metres in height and a weight of more than 200 pounds. His chest had no hair, and his hand and feet were of enormous size. Unfortunately I was unable to determine its type; because of its size, it could not very well be a chimpanzee or a gorilla, and in any case the presence of gorillas had not been established in the area around the lakes.

The mostly intact body would make it back to Berlin, where it was examined and recognized as a new type of gorilla, christened Gorilla beringei, in honor of Captain Beringe. And so it came to be that two types of “wild men” became known to the world at large after centuries existing as mere phantoms, campfire tales, and local legends. Considering how similar the original rumors and search for the gorilla were to present day reports of hairy hominids around the world, it is certainly exciting to entertain the thought that we may one day have a similar such amazing discovery.