Some places in this world seem to be wellsprings for the paranormal. In 1932, London theater actor Ian Davison had had enough of the limelight. The stresses of his job were getting to be too much, he had grown tired of it all, and so he went about fulfilling his dream of having a nice quiet secluded home in the rural countryside. He wanted to get away from big city life and the constant pressure of theater life and be more in tune with nature, something he had always dreamed about, and so he went about finding a property in the rolling green countryside of Kent to retire to. He did manage to find a place, but his hopes for a dream home were about to turn into a nightmare surrounded by strange and terrifying supernatural phenomena.

The property that Davison settled on was called Branden farm, and it was a bit of a fixer upper to say the least. The rickety 400-year old house was a weed choked mess, a feral, overgrown place with rotting floorboards, weathered walls, and a sagging roof and trash strewn garden, little more than a ruin sitting out half buried by weeds, prowled by rats and unfit for human habitation. It was large and showed some fleeting vestigial signs of the grand and opulent mansion it had once been, but mostly it was a decrepit, pale shell of its former glory. Despite all of this, Davison purchased it and went about putting all of his effort into renovating it. He moved into the derelict old house and committed himself to fixing it up, but it would soon turn out that weeds and rats were the least of his worries. 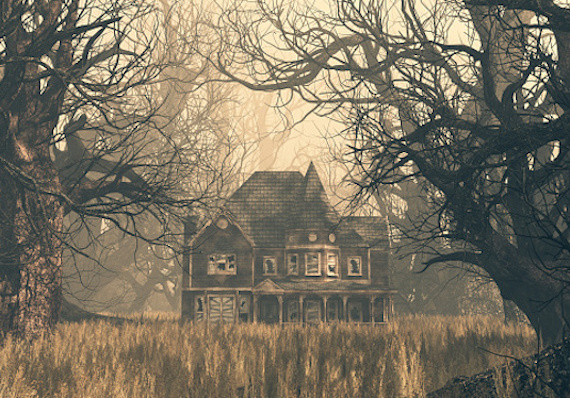 Almost immediately upon moving in Davison would experience various weird oddities and anomalies. One of the first things to happen was that he would hear an incessant rapping or tapping on the bedroom walls and windows at night as he tried to sleep. He would search the room and look out the windows but could never find any explanation for it, so he just explained it away as the settling of the old house and the wind and tried to ignore it, but it would gain intensity, graduating to scratching sounds, loud bangs, and what sounded like thumping footsteps even though he knew no one else was there. On one occasion he heard what sounded like someone running outside, and at that moment there was a loud crash, so forceful that the entire house shuddered. Thinking that the roof had caved in he ran to see what had happened but could find no sign of damage or anything amiss. He would then hear more ominous things at night, such as the sound of heavy breathing or panting, growls, and even screams, and he often felt the unshakeable sensation of being watched or the sense that his energy was being drained from his body to leave him in a state of utter fatigue.

It would soon prove to not all be in his head, because guests who came to stay there also reported hearing these noises and experiencing the odd phenomena, and many of them complained of having incredibly potent nightmares while sleeping there, usually of being strangled. There was one room in particular that was said to be especially imbued with some sort of sinister paranormal energy. This room, while not appearing any different from the other rooms outwardly, would experience extreme temperature fluctuations, sometimes going from freezing cold to scorching hot within minutes, no matter what the season, and no one could seem to stay in the room long before they became inexplicably dizzy or even fainted. If one were to try and actually stay in the room, sleep would not come so easily, as unseen hands were said to strike or choke anyone foolish enough to try. This room would come to be known as the “box room,” because the only thing kept in there were boxes for storage, so unsuitable was it for actual habitation. Other rooms had such activity as well, such as a large ground floor room that would have inexplicable claw marks found in the wood or have furniture topple over on its own. This room also had a habit of making people faint for no discernible reason, and clawed footprints were sometimes found in the coating of dust upon the floor.

These phenomena went on for some time before it all got even spookier with the appearance of various apparitions. One of these was a forlorn looking woman in a grey dress, who wandered about and appeared to be looking for something, seemingly oblivious to the fact that she was being watched, and she would disappear into thin air if anyone were to try and interact with her. This particular apparition seems to have carried a thick air of despondency around her, to the point that those seeing her would be overcome by a sudden, irrational sadness. There was also an ugly, stocky little man who marched about and seemed to be preoccupied by something and not a little irritated. Although these spirits were not particularly frightening or malevolent, the same could not be said about another who shared that old house with them. 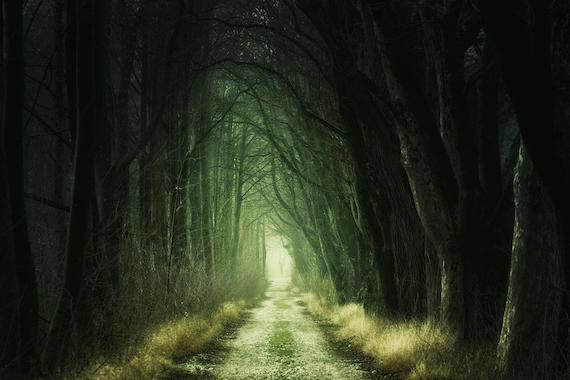 One frightening specter was that of a hulking man with “thick grinning lips” over yellowed, jagged teeth and described by Davison as “the foulest looking man I have ever set eyes on.” The entity wore a surreal costume of bright green, brown and red, and typically appeared in the large downstairs room. It was always heralded by the appearance of a phantom black cat, and when this cat would appear it was a sure sign that the maniacal looking thick-lipped grinning man was not far behind. The entity would often float across the room to disappear into the fireplace, and would also usually cause the temperature of the room to skyrocket, causing those present to break out into a thick sweat. Unlike the woman in grey, this menacing monstrosity would interact with witnesses, such as on one occasion in which Davison asked if it was a “fiend from Hell” and it merely laughed a hissing, evil laugh before vanishing.

On top of this there were various other less definable shadow figures lurking about the sprawling rural property, and it was all unsettling enough that Davison brought in a psychic and paranormal investigator by the name of Ronald Kaulbeck to check it out. The first room Kaulbeck investigated was the nefarious box room, which impressed him with the sheer, crushing sense of malevolence and “raw fear” pervading the small space, practically oozing from it. He decided to try and stay there overnight, and as had happened with those who had tried before he was attacked by unseen hands that grabbed his throat and pulled at his hair. When he called out for help three others came running but the entity continued to strangle him even as the men tried to help him. He was allegedly nearly killed before the phantom hands relinquished their vice-like grip to leave him there writhing arouind and gasping for breath.

Kaulbeck would recruit some other psychics and mediums to help him, and they would come to the conclusion that the spirits infesting the house were part of a black magic cult that had once used the house for various arcane rituals. The psychics and mediums were able to conjure up the information that the identity of the grinning man was a man named George Tarver, who had been a practicing occultist in the 16th century and master of a coven of witches. He was apparently a real piece of work, keeping a familiar that was “an evil and wicked spirit in the likeness of a black dog” and using his own child as a human sacrifice, which had driven his mistress insane, after which he had strangled her to death and burned her body. This mistress was the lady in grey. The stocky man was identified as a man named Hunter, and he had been one of Tarver’s followers until he protested the death of the mistress and was murdered by strangulation as well. They believed that these spirits, in particular Tarver, were angry and restless because Davison had intruded into their lair and begun his renovations, but amazingly rather than moving out he continued with his renovation work, defiant in the face of this otherwordly supernatural assault. Tarver was apparently not happy about this. 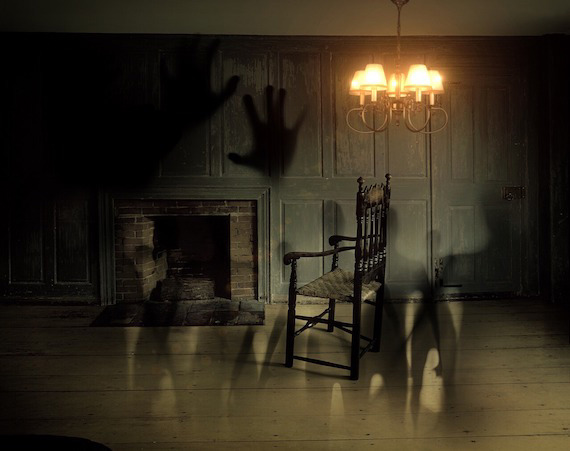 One afternoon Davison allegedly went to an upstairs bathroom and passed the ghostly black cat, a bad sign, and sure enough there looming near the door was the hulking, grinning Tarver staring at him menacingly as the cat circled his feet. Davison wanted to run, but he had had enough of being threatened by these spirits, and so he defiantly told the entity, “You must get out of the way! This house is mine! My will is stronger than yours! It does not matter what holds you here! You must leave! Go!” The grinning phantom seemed surprised, and for the first time his perpetual grin went away, melting into a scowl before he faded away into nothing along with his pet. Several days after this confrontation, Davison was approached by the lady in grey, and this time she saw him and acknowledged his existence. She approached him, nodded, and smiled before evaporating. The following evening the stocky man would appear by Davison’s bed, and this time he did not seem so irritated. He smiled too and made a gesture of goodbye before disappearing.

It was thought by the psychics and mediums that Tarver had kept those spirits enslaved there in that house, and that Davison’s courage to face the evil spirit had gotten rid of him, unfettering the others and allowing them to finally leave and move on. After this the apparitions would never be seen again in the house and the paranormal phenomena stopped. Davison would continue his renovations, and although it took several years he would eventually turn it into a luxurious, gorgeous estate surrounded by farmland, vast flower gardens and sprawling orchards. Indeed, it became known as one of the most opulent and grand farm estates in the region. Not bad for a spooky decrepit jumble of weeds once used by a cult. What was going on here and why were these dark forces tethered to it? What was it about this place that this should happen, and did it ever really happen at all? Why is it that these forces just left after Davison stood up to them? Who knows? In the end all we can really say is that it is all a very strange case, and a peek into a rather bizarre haunting, indeed.