The only thing stranger than Bigfoot is perhaps the fringe phenomenon of Bigfoot and UFOs. It is all a pretty weird mix to be sure, that these entities might be connected to the UFO mystery as a whole, but there are plenty of instances of Bigfoot and other ape-man things being seen in relation to UFOs. Here we will look at a selection of such cases, which really go into the weirdest of the weird.

In 1964, a Major General Sam Weaver was employed at Brooks Air Force Base, in San Antonio, Texas, and it was here that he heard from a colleague of a very strange story, indeed. According to a fellow member of the personnel there had been a document kept at the base that outlined how a hairy humanoid creature had been found in 1962 by members of a security team within the thick forest that surrounded NASA's historic John H. Glenn Research Center. According to the tale, security forces had found the beast after one nigh witnessing a blue orb of light circling the base at low altitude. Apparently guards at the base opened fire at this object, and the next day when the scene was investigated they found a colossal hairy humanoid creature lying on the ground, which looked very much like a human-looking gorilla. It was described as being 9 feet tall and weighing over 500 pounds, with 32 teeth and vocal chords that were noted as being similar to those of humans, and weirdest of all was that there was found to be a strange metallic device surgically implanted in the lower section of the creature's left arm. After this, it is unclear what become of this alleged corpse.

Another very odd account that was supposedly actually investigated by the CIA’s Project Blue Book UFO mission allegedly occurred in 1966 at Presque Isle State Park, along Presque Isle Bay on Lake Erie, in Pennsylvania. On the evening of July 31, 1966, some visiting tourists were driving at a beach there when their car got stuck in the sand and one of them went to go get a tow truck. A passing police car stopped to help them, and came back a little later to check on them, and that was when the four tourists and two police officers all witnessed a strange light over a patch of nearby forest, and the policemen and one of the group, a man named Douglas Tibbets, went to check it out as the others waited behind. Things would get very strange from there. 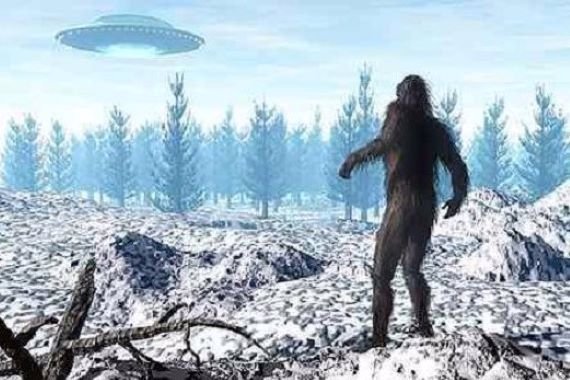 The investigating group had only walked a few hundred yards when they could hear the car honking wildly behind them. When Tibbets and the two officers got there, the others were very agitated and scared. They would claim that they had seen what they described as a “dull black shape, bigger than a man, big head and shoulders, arm-like appendages, no hands, no face visible, as though it had its back turned.” The creature had appeared in front of the car to loom over them before moving off into the night in the direction of where the mysterious light had been seen. After this, a craft with blinking orange and red lights had allegedly come down to land on the beach while tracking the figure with a beam of light. Police would go back to investigate the following morning to find some anomalous triangular indentations in the sand, somewhat corroborating what the women said they had seen.

What was going on here? For some reason, the year 1973 would produce numerous reports of what appear to be Bigfoot and UFOs together. From the files of researcher and author Albert S Rosales comes several that occurred in early September of that year. One of these happened near Penn Township, Pennsylvania, when three women driving along through a wooded area passed by a massive rectangular object that appeared to be metallic and was resting upon the ground. It was such an odd sight that they stopped the car to see what it was, and at that instance a ramp descended from the craft. As the women looked on in awe, three seven-foot tall hairy ape-like creatures reportedly came barreling out of the craft down the ramp to go running off into the woods. That same month, on September 27, 1973, two girls playing outside in Beaver County, Pennsylvania were startled to see an 8-foot-tall, hairy humanoid with glowing eyes run past them into the woods. According to the witnesses, it was holding some sort of glowing sphere in its hands. One of the girls’ fathers went to investigate and came back visibly frightened, although he refused to say what he had seen. Interestingly, it would turn out that other locals had seen a silvery object shooting a beam down into the woods at approximately the same time as this sighting.

The following month, one well-known such report occurred on the night of October 21, 1973, when a Mrs. Reafa Heitfield and her 13-year-old son were asleep in their trailer in Cincinnati, Ohio. When Heitfield woke in the middle of the night to get a glass of water, she claims that she saw a series of inexplicable lights out in the parking area, one of them being a cone-shaped construction of light. When she peered outside to see what the lights were, she reportedly saw a huge, ape-like beast with grayish hair covering its body, which then entered the light before it and the UFO shot off into the night. In that same year there was the report from a group of farmers in Fayette County, Pennsylvania, who claimed to have seen a huge UFO about 100 feet in diameter, next to which were standing two hairy, ape-like creatures with arms that dangled past their knees and with glowing green eyes. One of the farmers purportedly fired at them with his rifle, after which one of them raised its arm and the UFO shot off into the sky. The two hulking brutes remained, appraised the men for a moment, and then ran off into the forest. 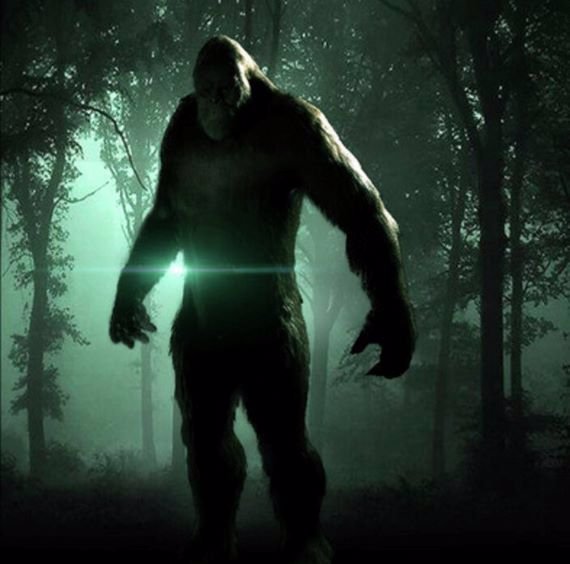 Just as harrowing was a report that came just a few days later, this time also in Fayette County, Pennsylvania. On this occasion, some farmers witnessed a dome-shaped UFO estimated as being around 100 feet in diameter over the road as they drove along. As they approached, they claimed to have seen two “gargantuan creatures covered with thick, matted hair, luminescent green eyes and long arms that dangled below their knees.” The UFO then shot off into the night as the hulking beats lumbered off into the nearby woods. The following year, in December of 1974, there was the very well-known case of dairy farmer William Bosak, who was driving home in Frederic, Wisconsin when he nearly crashed right into a huge spherical UFO sitting on the road. The bottom of the craft was enveloped in a thick mist, and sitting within a glass dome at the craft’s top was a hairy ape-like creature with reddish-brown fur and pointed ears, seemingly at work manning the controls. The craft and its bizarre pilot then blasted off into the night to disappear.

From 1975 we have a case from Greensburg, Pennsylvania, where in May of that year a Philip Arlotta and his unnamed wife had just sat down in their car, getting ready to go back home after visiting some relatives. As they were starting their car, they noticed am ovoid object flying in the sky not far away, which was bright yellow on the bottom, but darker nearer the top, and seemed to have six square windows in the darker section of its body that glowed red. The couple stopped their car to watch the strange object, as others gathered around as well, and all of them remarked on how silent the thing was. The object then suddenly flew off, and several of the witnesses piled into a car to chase after it. They followed it for some time before it gradually seems to get smaller and then disappear altogether. So far, so weird, but it would get even stranger the following evening. On this evening, a motorist along the same stretch of road saw something odd in the sky and pulled over to get a better look. As he looked on, he saw something running around on the ground that he at first thought to be a dog, but soon came aware was something more ape-like in nature, running about on two legs like a man, only tall and dark, covered in thick, black hair, and as described as being between 7-8ft tall. The thing apparently then entered the craft and flew off.

In March of 1979 we have the case of a Mr. Frank Rossien, who was driving along north through some marshlands along Sheppey Way, in England, when he came across the unusual sight of a “strange entity” to the left of the road of an entity with its 'curious loping walk’ that he at fist took to be some homeless derelict wandering about. Yet, as he drew closer and his headlights hit it, he could see that this was no normal man. He could see that the thing was humanoid in form, clad in a one-piece suit and helmet, with a head that was rather small compared to its broad-backed and stocky body, and there seemed to be no distinct neck or joining point between the head and shoulders. It seemed top be covered with thick hair, and had a visor of some sort covering its face. The witness would point out that there was no sign of mud on the creature’s legs, despite the muddy and swampy terrain. Oddly, another couple of motorists would later report to have seen a glowing red shape with several white lights revolving around it at around the same time as this encounter. What was going on here? What is going on with any of these? This is just a sampling of the phenomenon that is Bigfoot and UFOs, and it is all very weird at the very least.

Lesser-Known Creatures in the Field of Cryptozoology: You Might Be Surprised!