Cthulhu, the Occult, and the Lovecraftian Power Zones of Wisconsin

“I have looked upon all the universe has to hold of horror, and even the skies of spring and flowers of summer must ever afterward be poison to me.”
― H.P. Lovecraft, The Call of Cthulhu

In 1928, author H. P. Lovecraft released a short story in the pulp magazine Weird Tales under the title of The Call of Cthulhu. The story introduced the cosmic entity known as Cthulhu, described as having the shape of an immense green octopus, dragon, and a caricature of human form, and as being one of what are called “The Great Old Ones,” which form a loose pantheon of ancient, powerful deities from outer space, a sort of combination of gods and aliens. These Great Old Ones were said to have once ruled over the Earth but had since fallen into a deathlike sleep in which they await the day they are awakened and liberated from their slumber. And so would begin the lore of the Cthulhu universe, often called the Cthulhu Mythos, which would go on to be featured in numerous loosely connected stories by Lovecraft all set in a shared fictional universe. These are stories of cosmic horror, of dark cults, strange creatures lurking in the shadows, and beings so alien and beyond our comprehension as to cause madness just by looking upon them. Yet as much as this must surely all be fiction, there have been those over the years who have maintained that these sinister cosmic forces really exist, and Cthulhu has managed to seep into some occult beliefs, blurring the line between reality and fiction.

One of the first to develop the Cthulhu Mythos into an actual occult system was the British occultist Kenneth Grant, who was a close follower and student of the sorcerer and occultist Aleister Crowley and who was one of those in waiting to take over from Crowley upon his death in 1947. Grant did much to reconcile Lovecraft's nightmarish worlds and gods with real ancient mythic entities, and was a proponent of the idea that Lovecraft’s work was manifesting a long occult tradition that drew from a common cosmic source through the realm of dreams. Indeed, Grant pointed out that dream interpretation played a major role in various occult, shamanic, and religious traditions and experiences for centuries, and that they were all tapping into something real. In essence, he believed that rather than Lovecraft conjuring up these nightmare fantasies purely from his imagination, he was in fact channeling them through his subconscious and dreams without him being willing or even aware of that. Indeed, Lovecraft didn’t even have an interest in such paranormal ideas and was mostly very rational in nature, so he would have never believed any of this. It was partially this disbelief that kept him from “crossing the Abyss" to become a true adept. Bolton, K R. wrote in the The Irish Journal of Gothic and Horror Studies of this:

Lovecraft suffered from an acute inferiority complex, which prevented him from personally crossing the Abyss in his lifetime. He remained a withdrawn and lonely writer who retained a rational, skeptical view of the universe, despite the glimpses of places and entities beyond the world of mundane reality, which his dream experiences allowed him. He never learned the true origin of the tremendous vistas of cosmic strangeness that haunted his dreams. He never realized that he was himself the High Priest 'Ech-Pi-ET, the Prophet of the dawning Aeon of Cthulhu.

Grant called Lovecraft a “channel for cosmic forces of epochal or aeonic significance,” which had brought his consciousness into contact with an outside sphere of the fantastical, another dimension, the one inhabited by Cthulhu. According to Grant, he was a fantasy writer who could convey genuine occult knowledge via dream, tapping into messages transmitted to man from other dimensions, which had then channeled through his hand onto the page without Lovecraft even being aware of it. This meant that, in a sense, Cthulhu was real. One follower of Grant’s ideas and frequent writer on the Cthulhu Mythos by the name of Frater Tenebrous would say of the objective reality of Cthulhu and others like him:

Although Lovecraft outwardly espoused a wholly rational and sceptical view of the universe, his dream-world experiences allowed him glimpses of places and entities beyond the world of mundane reality, and behind his stilted and often excessive prose there lies a vision and an understanding of occult forces which is directly relevant to the Magical Tradition. These stories and novels contain hidden meanings and magickal formulae unknown even to their creator. These entities exist in another dimension, or on a different vibrational level, and can only enter this universe though specific 'window areas' or psychic gateways - a concept fundamental to many occult traditions. Cthulhu is the High Priest of the Old Ones, entombed in the sunken city of R'lyeh, where he awaits the time of their return. He is described as a winged, tentacled anthropoid of immense size, formed from a semi-viscous substance which recombines after his apparent destruction at the conclusion of the tale. While the shaman and the occultist will their altered states of consciousness, Lovecraft, a rationalist and materialist, is considered by his occult followers as what we might term an 'unwitting shaman,' whose ability to channel the denizens of the astral or unconscious realms through dreams is as legitimate as a willed channeling by the occult practitioner.

It is all much more complex than this, but the basic idea is that these cosmic forces, indeed Cthulhu himself, were working through Lovecraft’s dreams, just as they did to the characters in his stories. In this idea, Cthulhu is real, or that it had at the very least sufficient influence upon the psyche and occult value to be of use as a complete occult system, regardless of having it origins in 20th century short stories. This idea and Grant’s writings on the matter inspired a number of real Cthulhu cults and occult traditions that treat Cthulhu as real and even practice a form of magic called Lovecraftian magic, and there have even been those who believe that Cthulhu’s lost city of R'lyeh is a real place and have searched for it beneath the waves. The most notable of these Cthulhu orders is the Esoteric Order of Dagon, founded in 1981 and named after the society in Lovecraft's story Shadow Over Innsmouth, but there are others that have woven the Cthulhu mythos into their own esoteric systems. Lovecraft himself shunned such ideas, but they nevertheless took on a life of their own. Bolton, K R explains more on it:

Lovecraft was a rationalist, who eschewed any notion that his stories and the nightmares that inspired them had any cosmic or moral consequences. Ironically, Lovecraft's occult interpreters are committed to precisely what their unwitting shaman found contemptible in his own day in those who "invent or revive any sort of mythology... and defy anyone to prove that it isn't emotionally true" Nonetheless Lovecraft provided his stories with sufficient plausibility for seekers of arcane knowledge to enable them to weave a tapestry out of the threads he provided. Lovecraft's mythos has taken on a life of its own in precisely the same manner Lovecraft lamented the emergence of such crypto-religious and mythic revivals in his own time. Not surprisingly, the mythos has attracted the perverse fascination of occultists who are drawn to the 'dark' and 'chaotic' sides of life and the cosmos. There are moreover sufficient hints in the Lovecraft stories around which an entire occult system of theory and practice can be woven, especially when synthesized with other dark forms of occultism such as those of Crowley.

Since the occult, and indeed in the wider context religion, has since times immemorial been based in no small measure upon dreams, dream interpretations and visions, often willfully invoked by the use of rituals or of drugs, it is entirely fitting that some occultists would conclude that Lovecraft was unwillingly tapping into the astral plane, or what Jung called the collective unconscious, where there exist many atavisms repressed into the subconscious since the dawn of humanity, awaiting conscious awakening. Whether one calls such archetypes gods and devils is a matter of semantics or moral relativity. The Lovecraft mythos is just as 'legitimate' - or otherwise - as any other form of occultism or mysticism, and if it has sufficient force to impact upon the psyche then it is at least as proficient as any other, whether old or new.

The Cthulhu Cult is given a certain objective legitimacy by supposedly having extant remnants since time immemorial, examples alluded to by Lovecraft including South Seas Islanders, Voodoo worshippers, and the angakoks of Greenland. Hence, the present day Western adepts, dedicated to a return of the Great Old Ones to Earth to assume their godly mantles, claim to be part of a living tradition that has long existed, the very phenomena Lovecraft deplored in his own time. 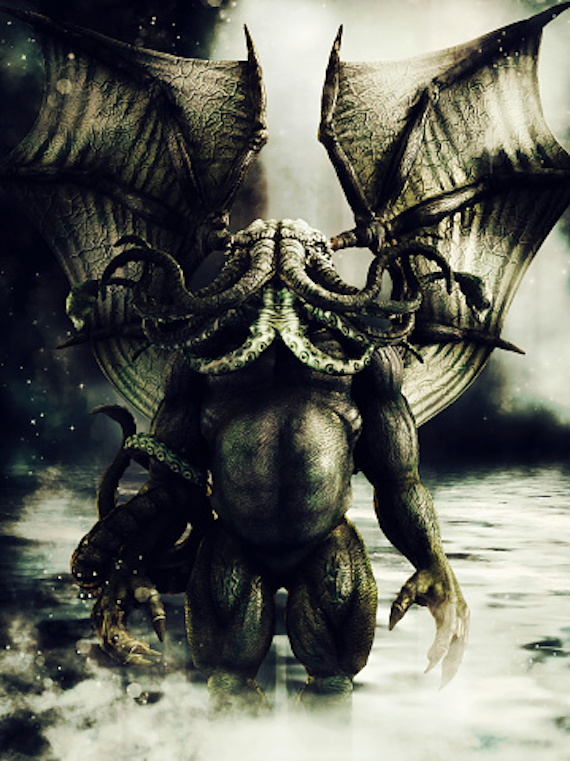 Another who would pursue such ideas is the occultist Michael Bertiaux, who is most well-known for his study of Haitian Voodoo magic, also spelled Vodon, Vodoun, Vodou, Vudu, Voudou, and his book Voudon Gnostic Workbook (1988), which is considered to be a bit of a 20th century classic by occultists. Bertiaux also founded the Lovecraftian Coven, which is a branch of the Voodoo Cult of La Couleuvre Noire, and is led by "a priestess of the Black Snake Cult.” Bertiaux had correspondence with Grant and described to him rituals carried out at certain Cthulhu power zones during which he had actually made contact with the "Deep Ones,” an immortal amphibious race from Lovecraft’s stories that have strong ties to Cthulhu that when conjured by the Lovecraftian Coven were said to “assume an almost tangible substance.”

According to Bertiaux, these Cthulhu power zones lie in Wisconsin, of all places, specifically at Crystal Lake, Fish Lake, and Devil’s Lake, and that they not only serve as portals to earth for the Deep Ones, but potential lines of communication with Cthulhu himself, as well as other Great Old Ones such as the Shub-Niggurath, the “Goat of a Thousand Young,” also known as the “Lord of the Wood," a massive monster full of tentacles. Bertiaux apparently carried out elaborate ceremonial rituals seeking to do this, involving the use of paintings and statues of sea monsters, animal sacrifices, and arcane chanting in Creole-French. Allegedly, the Deep Ones would appear and even fornicate with the high priestess leading the ceremony, and that Lovecraftian magic was magnified in these zones. Grant would write at length about these Cthulhu power zones and Bertiaux’s rituals to summon the Deep Ones from the depths of lakes in his 1975 book Cults of the Shadow, and it is all pretty bizarre to say the least. Is there anything to this? Could the lore and mythology written of by Lovecraft have been transmitted to him somehow from realms beyond out understanding? Is this all fiction or something else masquerading as fiction? It is unclear, but it is all a pretty wild ride all the same.

Shapeshifters: It's About Much More Than Just Skinwalkers and Dog-Men