NASA officials joined other space agencies around the world in noting the passing of Britain’s Queen Elizabeth II, pointing out that "Queen Elizabeth II's reign spanned all of spaceflight, predating both Sputnik and Explorer 1” -- Explorer 1 was the United States' first successful satellite, launched four months after the Soviet Union’s Sputnik 1. She would have loved to make a space flight – as long as the spaceship had a window for waving.

Scientists at Germany’s Johannes Gutenberg University Mainz have determined that ants are covered with two thin layers of wax, with one protecting ant bodies against water loss the other emits a scent which helps them recognize members of their own colony – the ants can even adjust the thickness of the wax layer when the environment warrants it. Ants love the wax coating … anteaters hate it.

A college student in the Balasore district of Odisha in eastern India claimed she was possessed for 90 minutes by the ghost of a girl who was murdered after being set afire – she knew details about the dead girl that no one else could know and claimed the girl was just trying to communicate with her parents. Channeling the spirit of a person who burned to death could make a medium well-done.

Archeologists in Borneo found the 31,-000-year-old remains of a child hunter-gatherer who had their lower leg cut off by a skilled prehistoric surgeon, allowing the child to live for nine more years with a stump and the help of their community – that makes this the oldest medical amputation on record. That explains the prehistoric child’s wheel in a special handicapped parking space.

An ecology professor on a hike with his students in Alberta, Canada, found a near-complete skeleton of a hadrosaur - a duck-billed herbivorous dinosaur – and part of it were still covered with preserved flesh and patches of skin that were pebbly like the outside of a basketball. Do the students get extra credit even though they’re not majoring in paleontology?

A team of scientists from the University of Bristol’s Department of Anthropology and Archaeology studying the diet of people living in Neolithic Britain found evidence that meat was cooked in large pots to make stew, while cereals were cooked in small pots and mixed with dairy products to make gruel. After 6,000 years, isn’t it time for Brits to change the menu?

Janus the two-headed tortoise, born at the Geneva Natural History Museum on September 3, 1997, turned 25 this year and is believed to be the world's oldest bicephalic tortoise – caregiver Angelica Bourgoin says each head has its own personality, with the right head being more curious and strong, while the left is more passive and loves to eat. They get along well except in election years.

A video from India shows an elephant walking freely in the corridors of a hospital in Binnaguri army camp in West Benga in Jalpaiguri district before finally finding an exit and walking out. Only an elephant can sit in a waiting room alone and still complain it is too crowded.

The AI image generation artist known as Supercomposite accidentally used a series of negatively weighted prompts to create Loab, a creepy image of the “first cryptid of the latent space” – even as Supercomposite tried to change the image, the horrific face of Loab kept eerily coming back. Bigfoot says, “Pics or it didn’t happen.”

The Black Vault website, which has been responsible for releasing a number of U.S. Navy videos of alleged Unidentified Aerial Phenomena (UAP) sightings, says it has been asking the Navy to  release ALL of their videos that hold a UAP designation – it received an answer this week from the Navy that access to all videos with that UAP designation have been fully denied due to national security concerns. This sounds like a job for UFO disclosure proponent John Podesta, who is back in the White House and still feels guilty about not releasing the X-files in his previous stints there.

A British psychic medium and “spiritual healer” claims she can also control alcohol ‘spirits’ and prevent hangovers by 'grounding' her drinks by “visualizing a grounding cord growing out from the bottom of my drink” into the Earth where a psychic tool called 3 gold suns to clear out any bad energy that could cause a hangover – a skill she claims she can tech anyone. Does a 12-pack need 12 cords? (Asking for a friend.)

A study published in the journal Animal Behaviour found that wild chimpanzees in the Ugandan rainforest have their own "signature drumming style" when they beat on tree roots – the signature rhythms allow them to send information over long distances, revealing who is where, and what they are doing. It is probably a bad sign if you hear a chimp doing the drum solo from “Wipe Out.”

A mysterious Dead Sea scroll fragment, one of just three papyri to survive from the First Temple Period, which was lost nearly 60 years ago, has been found in Montana by a professor writing a book on ancient Hebrew script who says the owner’s mother received it as a gift in Jerusalem in 1965, framed it and it has been hanging on a wall ever since – the fragment is considered mysterious because it is made up of just four torn lines beginning with the words 'to Ishmael send...' in ancient Hebrew. An ancient mail order?

Anatomical studies in the 1960 first proposed the idea that humans have a lizard brain (triune brain) due to mammals evolving from reptiles, but new research by the Max Planck Institute for Brain Research on actual lizard brains from bearded dragons (Pogona vitticeps) and determined that mammal and reptile brains evolved separately from a common ancestor. Your scaly skin and love of flies must have come from someplace else.

Betelgeuse – the dying bright red giant star in the upper left of the constellation Orion - was yellow-orange 2,000 years ago according to astrophysicists of Friedrich Schiller University Jena in Germany who say this color change over such a short time interval indicates that Betelgeuse has 14 times the mass of our sun, is now 14 million years old, and in about 1.5 million years, it will finally explode as supernova. Fortunately, this does not affect the movie nor the musical.

A family on holiday at the Haven Greenacres Holiday Park in Gwynedd, Wales, recorded video footage of a mysterious creature popping out from the sand and seemingly waving its head as if to say hello at their little boy who was running past it – a wildlife expert at the Anglesey Sea Zoo could not identify it without more video data. They need to be careful – there is a fine line between the head wave for “Hello” and the head wave for “Bring me that creature to eat.”

Bad news for current and future astronauts – a study in the journal Nature Communications Biology found that blood samples from 14 NASA astronauts who flew Space Shuttle missions between 1998 and 2001 all showed mutations in their DNA that were probably caused by exposure to space radiation but had not yet become a serious threat to the astronauts' long term health. Even worse, it’s tough to get a second opinion when you’re orbiting the Moon.

Yet another TikTok time traveler (@timevoyaging) claims to have come back to 2022 to select eight people at random to take to the year 2906 so they can witness the "chaos and havoc" people have caused to the Earth, so they can then come back and work to prevent it. The list of people we’d like to see go is long … even longer if the time traveler promises not to ring them back.

Scientists in New Zealand are studying a Sitka spruce on uninhabited Campbell Island, which holds the Guinness World Record title for the “remotest tree” on the planet because It’s the only tree for 138 miles (222 km), in hopes that the “loneliest tree in the world” can be a valuable tool to understand climate change and what is happening with the uptake of carbon dioxide in the Southern Ocean. Some people want it removed because it is an invasive species, but “The Loneliest Tree in the World” sounds like the perfect plot for a Disney movie.

After using plastics to recreate the so-called ‘diamond rain’ believed to be occurring as extremely high pressure and temperatures turn hydrogen and carbon into solid diamonds thousands of kilometers below the surface of ice giant planets like Uranus and Neptune, the most common forms of planets outside our solar system, researchers are convinced it could be raining diamonds on planets throughout the universe. Where is Prince when we need a song called “Diamond Rain”?

The Mysterious Death and Rebirth of Marjorie McCall 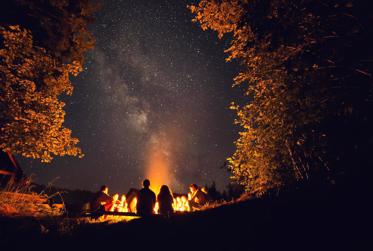