One very weird area of strange encounters with creatures from beyond our understanding are those involving winged creatures of all shapes and sizes. These entities prowl the skies occasionally popping in to make themselves known and to fuel discussion and debate, their origins unknown. Some cases of mysterious winged entities are especially weird, and here we will look at some of the weirdest.

Our earliest report here comes from all the way back in the 18th century, in the Russian city of Arzamas. On June 4, 1719, the city was suddenly threatened with thick and violent storm clouds that seemed to appear out of nowhere on an otherwise clear day. As the storm roiled, there reportedly fell something very strange from the whirling grey clouds, described as “a dragon.” The winged monstrosity apparently hurtled down from the skies to smash into the ground near a fortress and soon after city officials gathered to examine the beast. The winged, reptilian creature was dead when authorities arrived, and it was measured and found to be 25 feet long, with a wingspan of 23 feet and a tail measuring 10 feet long. Its massive maw was supposedly filled with an array of teeth like knives, measuring 4 inches long, and the wings were compared to those of a bat. Along its back was an armored, scaly ridge, and its legs were tipped with fierce-looking talons like those of an eagle. The body was purportedly preserved in a barrel and sent to the Kunstkamera museum, but it is unknown what happened to it after this. What was this thing? 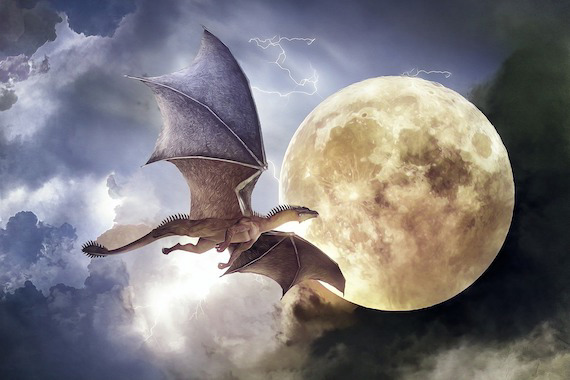 Our next case jumps ahead to the year 1909, in Millville, New Jersey, in the United States. On January 21st of that year, a local man by the name of Dan Possack was doing chores around his house when he heard strange sounds outside that sounded like footsteps and went to investigate. When he went outside, he encountered what he described as a “monster beast-bird straight out of the bad place,” an estimated 18 feet long and with a giant red beak, which reared up to loom over him. Dan fully expected it to attack him, but then it spoke in perfect English and politely asked where the garbage can was. Dan didn’t even respond, just running blindly towards the barn, but the monster caught up with him and caught him in its beak. The terrified man grabbed the hatchet on his belt and hacked away at it, and as he did he was bewildered to see that it seemed to be made of wood, with splinters spewing out from his strikes. Dan hit it in the head and one of its eyes apparently fell out as it screamed in pain and dropped him. Perhaps most bizarrely of all, it then inflated “like a balloon” and floated off into the sky. Weird, indeed.

In 1927, a farm in the Somerset region of Southeast Queensland, Australia was plagued by strange lights in the sky over the course of several days, which were described as dancing about and doing various aerial acrobatics. This seemed very curious yet harmless at first, but then cattle and other livestock began turning up dead in mysterious circumstances, with puncture marks found on their necks and scratch marks on their bodies as if they had been attacked by some kind of wild animal. The family’s son was woken up one evening by odd noises outside the house and the next day footprints were found by some unidentified trespasser, leading the family to think an intruder was about and make sure all of the doors and windows were locked at night. Things would only get stranger from there.

One evening the farmer saw a particularly bright light moving through the valley, bright enough to fully illuminate the ground beneath it. This light allegedly came down to land on a hilltop, after which the man ran away in panic. When he went back the next day, he found a circle of scorched grass about 30 feet in diameter where the object had landed. Not long after this, people in the area began reporting that a “giant bird” was lurking about, described as around 9 feet tall and leaving behind a “poultry smell' and feathers wherever it went. Some witnesses claimed there were actually two of these massive birds prowling about, and that they sometimes appeared to be having an unintelligible conversation between themselves in some alien language. All of this strangeness would come to a head when the farmer one day came face to face with a strange humanoid wearing a white suit and metallic boots, which then vanished into thin air. After this the lights, the birds, and the anomalous sounds ceased. What in the world was going on here? 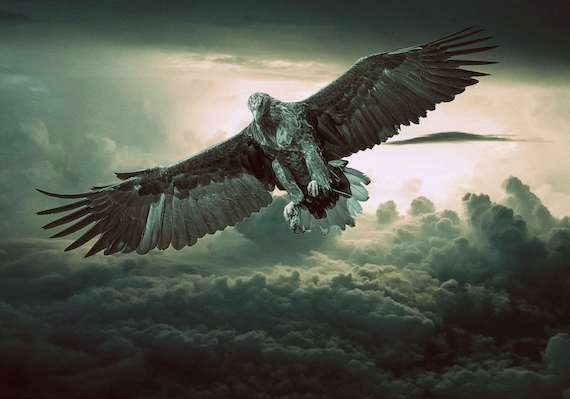 Moving ahead to 1956 we have a case from Richardson County, Nebraska, in the United States. One evening in the winter of that year, the unnamed witness was on his way home along a rural road when he came across quite the surreal sight. He claims that he was confronted by a 9-foot tall “demonic creature” that appeared to be wearing some kind of a mechanical harness upon which there was a set of wings that appeared to be made of metal and were lined with multicolored lights. On the creature’s chest was a control panel of some kind, which it was guessed controlled the contraption. The creature’s skin was described as being brown and rough like leather, and its head was oversized and with “large and watery eyes.” These eyes stared at the terrified witness for some time before the monstrous entity let out a fierce hiss and shot up into the sky to fly away. The witness would become convinced that he had seen a demon from Hell itself. The mention of the metallic wings and lights is a curious detail, and one wonders just what this was all about.

Also from 1950s we have a case from the coastal city of Pelotas, in southern Brazil. One evening a Lucy Gerlach Réal and her husband Luiz de Rosario Réal were hiking along a forest trail when they came across strange silhouettes were swooping around in the sky just above the forest canopy. They at first just assumed that these were large birds, but as they came closer they could see that these figures were much too large to be any kind of bird they knew of, and the bodies seemed to be vaguely humanoid. These figures then landed in a tree and crouched down, as if trying to hide from the couple or sizing them up. The seemed to have human bodies with large, bird-like wings, but their features could not be clearly seen and the couple was not willing to get any closer to find out, running the other way as fast as they could. They would later claim that they felt the creatures had been hunting them. 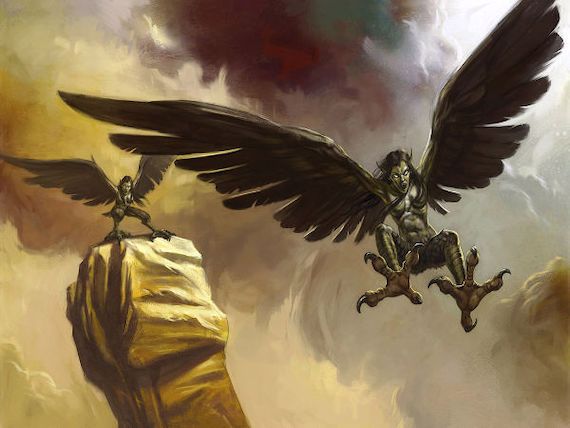 Just as strange is a case from 1980, in Finksburg, Maryland, in the United States. In the Spring of that year, an unnamed witness was driving next to an empty cornfield at around 3 a.m. when her headlights captured a tall, grey colored figure standing right in the middle of the road. She immediately slowed down and thought that it was a person at first but as she approached she could see that it was around 7 feet tall and had an unusually prominent and pointed chin. As she inched closer still, the figure then extended a pair of leathery wings like a bat’s and rose into the air to fly towards the car and hover above it. The witness would describe how the wings produced such a powerful downdraft with each flap that the car actually shuddered, and after a few moments of this it seemed to thump on the roof once and then fly off over the cornfield into the night.

More recently still is a truly bizarre case from the city of Donna, Texas, in the United States. In 2017, a witness identified as “Gavin S” was walking along a street at approximately 1 a.m. when he saw what he described as “half man and half bird” perched atop the roof of a darkened store. The creature seemed to notice him, and when it did it spread a vast set of wings and its eyes began to glow red as it rose into the air. As it flapped its wings and flew higher Gavin says it then exploded into flame and lit up the night as it careened away. What are we to make of this case and the others we have looked at here? Do these have any basis in reality? If so, then what are they? Are they of this earth, aliens, or even interlopers from another dimension? The answers remain murky, and they are pretty damn strange accounts no matter what they are.