Hauntings happen all over the place, and they can get pretty intense and frightening, indeed. Our story here takes us back to 1962 and a William Adams, who was a normal working class man who worked the graveyard shift at the Detroit Cadillac plant, in Detroit, Michigan, and had just moved into a rented house with his family. They were pretty ordinary people, with nothing particularly odd or special about them. Indeed, they were completely unassuming and mundane in every way. Yet, they were about to become the center of one of the strangest and most intense hauntings the city had ever seen, involving spirits and possibly demons.

It began with the nightmares. When they moved into the house William took to sleeping during the day in a tiny, secluded bedroom in the back of the house in order to not be disturbed by the noise of his five young children, and shortly after settling in he began to have horrific, potent nightmares. These bad dreams were apparently incredibly realistic and horrifying, featuring all manner of grotesque imagery to the point that he would wake in a cold sweat screaming so loudly that the neighbors could hear. These nightmares would come to him every night, and every night he would wake in a terrified panic, never remembering exactly what had happened in these dreams but in a complete state of dread. He had never experienced anything quite like it, and it got so bad that he was running on very little sleep, unable to function at his job, and he was starting to think that he might be losing his mind and in need mental help. He decided that he could not stand sleeping in that room any more, and oddly when he went back to sleeping in the master bedroom the nightmares ceased. At the time William did not attribute any of this to the paranormal, however, this was only the beginning of the strangeness. 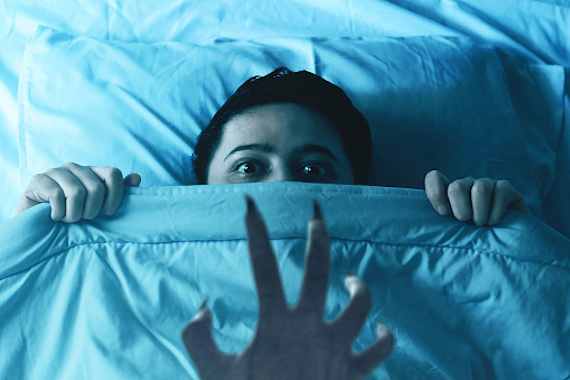 It would soon turn out that that back room had a certain sinister atmosphere to it. The family dog refused to go anywhere near the room, and the children claimed that they sometimes heard strange noises coming from within so they avoided it as well. William checked the room out several times and noticed that he felt very cold when he was in there, even in the summer, and that there was an indescribable air of dread pervading it. He could not figure out why this should be, as the room was just a tiny little space barely big enough for a bed and a closet, and by all appearances there wasn’t anything menacing about it at all. Yet the dog and kids were terrified of it and he could not deny that there was definitely a strange, slightly threatening ambiance when he was in there.

Despite this, when William’s grandmother came to visit them, he offered the room as a guest room, but she too was immediately aware that there was something off about the place. She nevertheless slept in there, but during the night she heard noises in the floor and walls that she described as sounding like someone was trying to break it, and she would refuse to sleep there again. Indeed, she was so scared by the experience that she cut her trip short and hastily went back to her own home. Thinking that there had been an intruder trying to break in, William contacted the police, but they could find no trace of a break-in or anything suspicious at all. It was now starting to dawn on him that, despite his unwillingness to believe it, that there was maybe possibly something paranormal going on. He looked into the history of the house, but all he could find out about that room was that it had been added on to the house after the original structure had been built, nothing that would explain why there was so much strange phenomena orbiting it.

When William’s cousin Shirley Patterson came to visit, he stayed in the room as well, and it did not take long at all for things to get weird. Patterson was not told anything about the strange things that had been going on with the room, and in a way it was sort of an experiment, since he was known to be a practical and skeptical rational individual who would not be prone to making anything up or having his mind play games with him. However, that night he would feel himself be turned over by some unseen force to be confronted with the sight of what looked like a woman standing by the doorway facing the other way, with long hair and wearing what looked like a short fur coat over a blue dress. He at first thought it must be Mrs. Adams, but as he studied her he realized that it was not, and at the same time he was suddenly overcome with a sharp, irrational fear that practically paralyzed him. He would say of the incident:

I didn't know anything about the room. There was no reason for me to suspect anything. No reason to be afraid. It seems that I was in the bed for just a few minutes. I don’t know whether I was asleep or not. I was facing the wall, and then I felt something turn me over. Don't ask me to describe the feeling. All I know, is that it rolled me over, and then I saw it standing outside the bedroom door. At first I thought it was Lillian, but I started to tremble. It was a woman with long hair, and she had her back to me, looking into the kitchen. She was wearing a short fur coat, and a kind of blue dress. 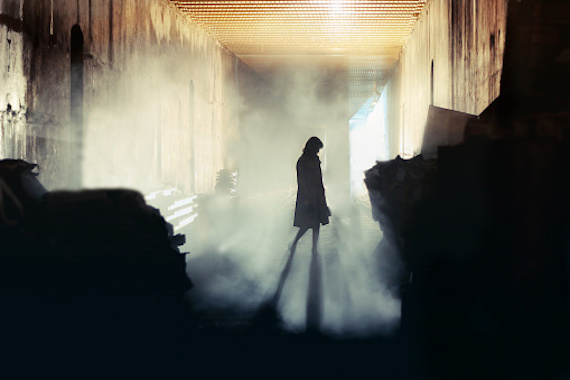 His fear became so intense that he screamed out, and when he did all of the lights in the house went out to send darkness crashing down on them. Patterson stumbled around in the blackness and found his way to the kitchen, when the lights turned on to show Mrs. Adams standing there and no sign of the woman in the blue dress. As he talked to her they could hear what sounded like groans coming from the bedroom and a foul stench wafted through the house that made them feel sick. As they tried to figure out where the smell and that sound were coming from there was a sudden loud wailing scream that sounded “like the mournful scream of something half-human and half-animal,” and a trapdoor in the utility room opened and slammed shut with great force, sending the two of them into a state of abject terror. When William came home from his late shift, they told him what had happened and the police were called once again, but all of the doors and windows were locked and there was no sign of a break-in or intruder. At this point, William was thinking enough was enough, and he decided that he would go back and stay in that room the following evening to see for himself what was going on and confront whatever was in there. He would get more than he bargained for, and he would later say of what happened in that room:

I'm not the kind of guy who believes in ghosts--at least I didn't then. I'm a grown man with a family. I've been in the Army. I just couldn't convince myself that there was anything to it. I had to try again, and see what would happen. I don’t know how long it was. I was still awake. I heard a noise in the room. I turned over to look and there was a face inches away from me. It was the most horrible thing I’ve ever seen. The eyes stared past me and the mouth moved to talk but only a hissing noise came out- and a terrible stench. All I could think of that next morning was that if the bedroom door had been closed that Sunday night, I would have killed myself beating against it to get out.

The sight of that face hovering in the gloom in front of him in that dim room sent him into a hysterical panic, fear driving him up from the bed to send him careening down the hall screaming. Indeed, he was in such a panicked state that Patterson and his wife supposedly had to wrap a blanket around him and throw him into a chair to calm him down. As they did this, the sickening stench they had smelled before came back, saturating the air with the most repugnant smell they had ever experienced and making Patterson vomit. This was enough to send the family packing, with them hastily grabbing their things and children and immediately leaving to go stay at a neighbor’s house. The very next day they would move out, never to return to that cursed house and its paranormal weirdness. 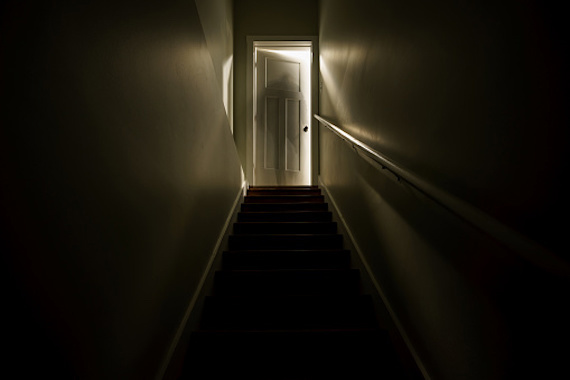 Not long after this, Mrs. Adams’ brother, Leo Sanocki, and her sister Virginia came to check the house out and help the family move some of their things out because they were too afraid to go in there again. Curious as to whether there was anything to the story or not, Leo decided to go to that back room and see what the fuss was about. He did not believe in any of the ghost talk he had heard at all, but this was about to change. Virginia would say of what happened next:

I stood out in the kitchen, and Leo said he was going lie down on the bed for 10 minutes in the dark. A few minutes later, I heard this awful groan come from the bedroom. If it was Leo, I have never heard him make a sound like that before. Then he came rushing through the door into the kitchen, with the most horrible look on his face, like he was scared out of his mind. I asked him what he saw, but he wouldn't tell me anything.

Apparently Leo never would tell anyone what he had seen in that room, but it was bad enough that he had nightmares for weeks after, and he would refuse to ever step foot in the house again. After this the house remained empty even as its notoriety grew, and the landlady allegedly forbade any paranormal investigators from checking the place out, so we may never really know what was going on here. What was going on here and what terrorized this family so intensely? Was it a ghost, a demon, or something else? Why was it tethered so strongly to that room? We may never know, and it seems that for now this strange place keeps its secrets close.

The Man Who Really Did Know the Truth of Roswell: But What Was the Truth?