The Late Frank Drake, the Drake Equation, Project Ozma and His Lifelong Search for Extraterrestrial Intelligence

UFO researchers and proponents for the search for intelligent life (SETI) are treated like rock stars these days – in fact, some like Blink-182’s Tom DeLonge ARE rock stars. However, they all owe a debt of gratitude to those who paved the way for them – making a path that was mostly rocky dirt roads filled with pothole and traps set by those who wished to disrupt or ridicule their quest to find or prove the existence of extraterrestrial life. One of those people is best known by his last name and a mathematical term that together have given hope to those on traveling on that path that has now become a highway paved and repaired with government support. We’re referring of course to the Drake Equation – a formula for estimating the number of active extraterrestrial civilizations in the Milky Way Galaxy – and Frank Drake, its inventor, who passed away recently at the age of 92.

Frank Donald Drake was born on May 28, 1930, in Chicago, Illinois, and said he first considered the idea of life on other planets as an eight-year-old far beyond his years contemplating what it might mean if intelligent life was the result of chance. Drake studied astronomy at Cornell University while pursuing a degree in Engineering Physics, followed by graduate school at Harvard University where he received a M.S. and Ph.D. in Astronomy. From Harvard, Frank Drake moved to the National Radio Astronomy Observatory (NRAO) in Green Bank, West Virginia, to a job in radio astronomical research. It was there he mapped the center of the Milky Way Galaxy for the first time and discovered the ionosphere and magnetosphere of Jupiter. It was also at NRAO that Drake first connected to another giant in the search for extraterrestrial intelligence – the Arecibo Observatory in Puerto Rico. Like Drake, Arecibo was a giant in SETI for decades (the world's largest single-aperture telescope for 53 years) until breaks in cables forced it to be decommissioned and demolished in 2020.

“In 1960, radio astronomer Frank D. Drake, then at the National Radio Astronomy Observatory (NRAO) in Green Bank, West Virginia, carried out humanity's first modern attempt to detect interstellar radio transmissions. Project Ozma was named after the queen of L. Frank Baum's imaginary land of Oz -- a place "very far away, difficult to reach, and populated by strange and exotic beings."”

To this day, not many people know about Project Ozma, but even fewer knew of it in 1960 because Drake and the project team at NRAO decided to keep it quiet for fear of being ridiculed by the science and astronomy communities and the general public. “Ozma” was the perfect name because L. Frank Baum, the Oz series author, claimed he communicated with Oz by radio to learn of the events taking place in The Emerald City. Drake used the NRAO’s 26-meter radio telescope to search for possible signals from the stars Tau Ceti (in the constellation Cetus) and Epsilon Eridani (in the constellation Eridanus) star systems – both are nearby and Sun-like.

“From April to July 1960, for six hours a day, the receiver on the 85-foot antenna was tuned to the frequency of the 21-centimeter emission line of interstellar hydrogen. The assumption was that this frequency, 1420 MHz, would be known by any technologically sophisticated society, and would constitute a universal “hailing frequency.”

The total cost of the project was about two thousand dollars.”

Compare that to today’s ‘rock star’ budgets and rock star publicity for SETI projects and you have some idea of how challenging Project Ozma was. Unfortunately, the six months of listening picked up no extraterrestrial signals and the project was terminated in July 1960. One benefit – the project intrigued Carl Sagan, then a graduate student, and he and Drake became lifelong friends and collaborators. A second benefit, pointed out by the SETI Institute website, was that Ozma inspired other searches for signals from other stars, prompting in 1961 the first scientific meeting at NRAO to discuss SETI searches … that meeting was where Frank Drake unveiled the equation that bears his name.

The Drake equation has been called “second most-famous equation in science (after E= mc2)” and, since it was developed for astronomers, is not an easy one to simplify. Per the SETI Institute (full explanation here), the first six terms, when multiplied together, yield the average number of new technologically transmitting societies that are formed in the Milky Way galaxy each year. When multiplied by the last term, L: the average lifetime they stay on the air, you get the average number of message-transmitting intelligent societies in the Milky Way Galaxy now. The higher that number, the better the chances of finding extraterrestrials. 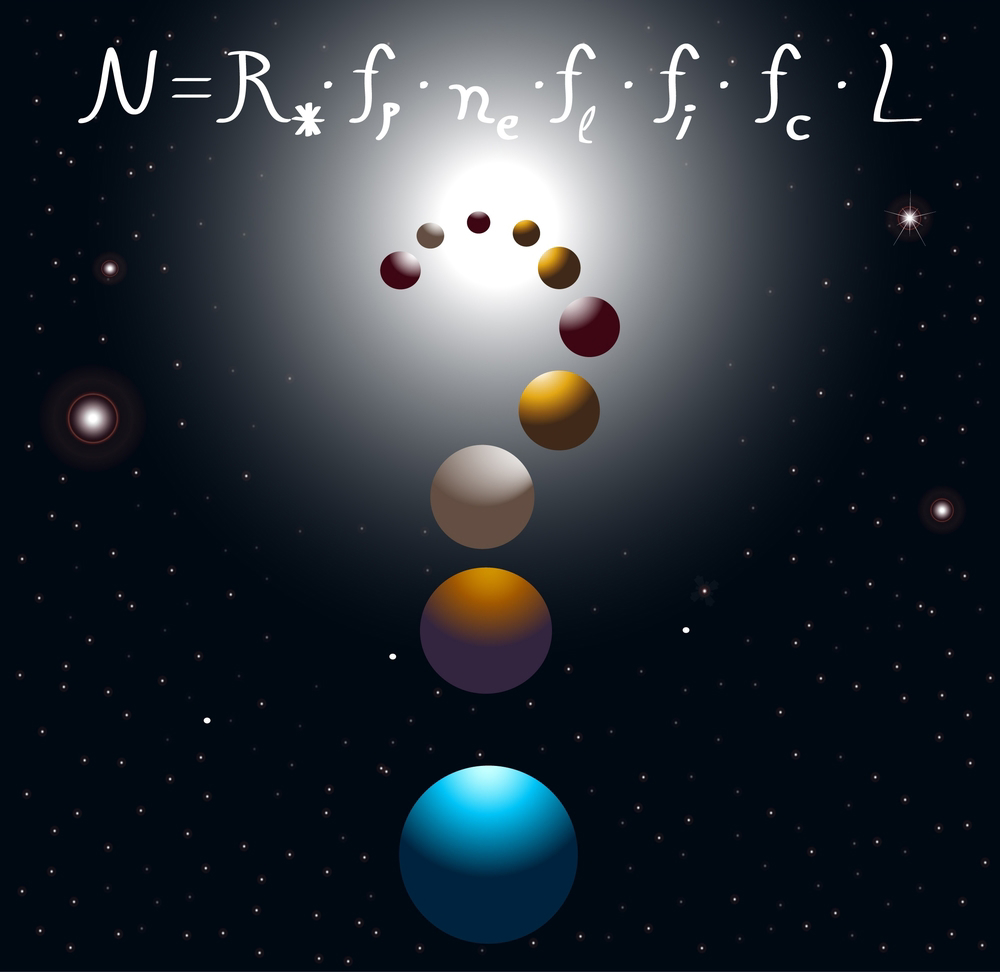 At the time of the NRAO meeting in 1961, Drake was hoping the equation would stimulate conversations amongst the attendees, since only one of the variables was known at that time. Drake plugged in his own estimates for the variables and came up with an average of 10,000 intelligent civilizations per year. As expected, determining the probability of life being intelligent is the hardest to quantify. It is a credit to Frank Drake that, while his equation has been exercised and criticized for 60 years, no one has developed a better one.

Creating such a famous equation would be enough for many astronomers and scientists, but Frank Drake went on to teach and influence an army of followers as an astronomy professor at Cornell and the University of California, Santa Cruz. At Arecibo, he was involved in a project that beamed a radio message to a cluster of stars. He also directed the SETI Institute's Carl Sagan Center for the Study of Life in the Universe and chaired the institute's board of trustees. With Carl Sagan, he helped create two messages sent from humanity that were engraved on a plaque on the Pioneer 10 and 11 probes and on gold records placed on the Voyager 1 and 2 probes. Frank Drake continued to serve on the SETI Institute's board of trustees until he died on September 2, 2022, at his home in Aptos, California, from natural causes at the age of 92.

Thank you, Frank Drake, for your service to astronomy,science and the search for extraterrestrial intelligence.

The Real Reasons Why Most Ufologists Are Watched By Government: Not What You Think