An Alien, an Astrophysicist, a Philosopher and a Lawyer Walk into a SETI Discussion

An alien, an astrophysicist, a philosopher and a lawyer walk into a bar. The bartender asks, “What are you having?” All three humans point to the extraterrestrial sitting next to them and say together, “We’ll have what he’s having.” That is not quite what happened recently when an astrophysicist from Penn State ETI Center, a professor from the Department of Philosophy at Spring Hill College, and a lawyer and instructor at Space Law and Policy at Harvard Law School got together wihtout an extraterrestrial – instead of having a drink, they wrote a paper – but the purpose was the same … the three pondered what might happen when humans encounter intelligent extraterrestrial beings. The twist is that the discussion centered around the politics of the situation and how it could make or break that first meeting … and the future of humanity. With heavy topics like that, perhaps they SHOULD have met in a bar! 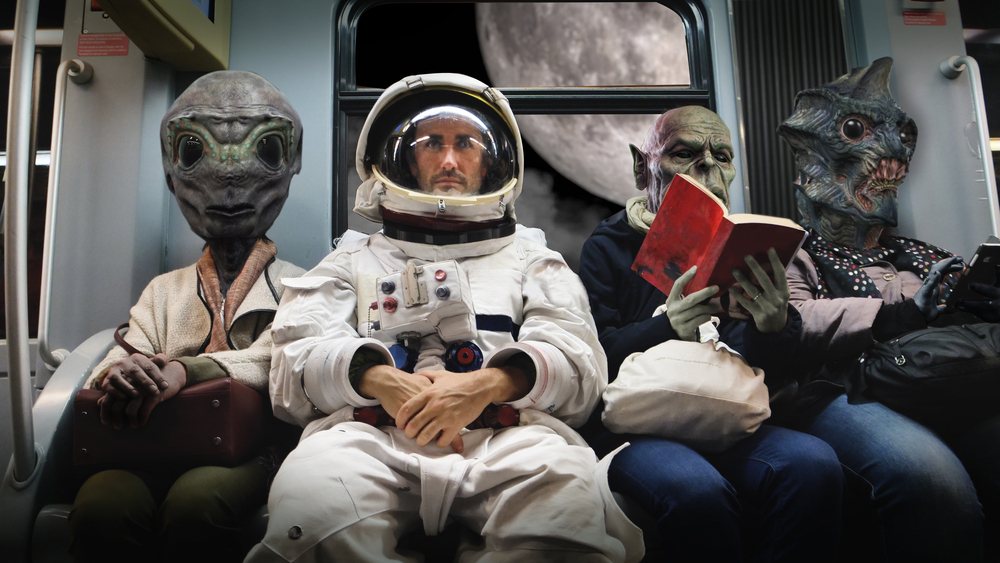 “They conclude that "passive" SETI involves an underexplored yet significant risk that, in the event of a successful, passive detection of extraterrestrial technology, state-level actors could seek to gain an information monopoly on communications with an ETI. These attempts could lead to international conflict and potentially disastrous consequences. In response to this possibility, they argue that scientists and facilities engaged in SETI should preemptively engage in significant security protocols to forestall this risk.”

The discussion that resulted in the preprint paper, “Geopolitical Implications of a Successful SETI Program,” began almost like a book club meeting – Jason Wright, the Penn Sate astrophysicist, Chelsea Haramia, the Spring Hill College philosopher, and Gabriel Swiney, the Harvard law professor, got together to discuss a previous paper entitled “The Search for Extraterrestrial Intelligence: A Realpolitik Consideration.” Written by Kenneth Wisiana from the Center for Space Research at the University of Texas, and John Traphagan from the Department of Religious Studies and Program in Human Dimensions of Organizations at UT, that paper looks at the seemingly simple act of detecting a real signal an extraterrestrial civilization – proof that we are not alone – and look at the ramifications it will have on the world’s “realpolitiks” … the real work that politicians, world leaders and government officials do behind the public façade of politics.

"The history of international relations viewed through the lens of the realpolitik tradition of realist political thought suggests, however, that there is a measurable risk of conflict over the perceived benefit of monopoly access to ETI communication channels."

Wisian and Traphagan take a very non-cinematic approach when dealing with extraterrestrial contact – they don’t see the aliens as the dangerous party … they see humans as the likely cause of trouble. They start with the assumption that any civilization advanced enough to travel to Earth has technology far superior to our own. If these ETs are benevolent and friendly to the humans where they touch down, that country is likely to become privy to their technology. That knowledge could cause envy and/or fear in other countries and convince their political leaders to use whatever means necessary gain control over the alien technology. And “whatever means necessary” always includes wars and armed conflicts. Those conflicts could occur even if the alien technology is benign – like advanced communications capabilities, for example. Surprisingly, Wisian and Traphagan think the “whatever means necessary” will be mild and suggest that SETI scientists prepare for it by notifying local police, hiring more security guards and restricting access to radio telescopes.

“The existence of hardened facilities and locked-down information flows could itself be interpreted by outsiders as evidence that some world-altering activity was occurring within that community or facility, thus leading to exactly the kind of espionage and conflict that W&T are trying to avoid in the first place, even if nothing had actually been discovered.”

In a sense, the three authors of the new paper think Wisian and Traphagan are naïve in their belief that humans will take a reasonable and common-sense approach to finding out other humans have – or even just MAY have – alien technology. It is common to look at a safe and think, “They must have something really valuable to protect it in a safe.” Wright, Haramia and Swiney think “the mere perception of an information monopoly could be enough to generate dangerous conflict,” so “we ought to avoid security measures that reinforce that perception.” In a distorted and dangerous version of “It’s the thought that counts,” the authors say the real threat is “the perception by state actors that an information monopoly is likely.”

If the perception that another country possesses the knowledge of extraterrestrials is the problem, what is the solution?

“As an alternative to the Wisian & Traphagan recommendations, we recommend transparency and data sharing (which are consistent with currently accepted best practices), further development of post-detection protocols, and better education of policymakers in this space.”

Wright, Haramia and Swiney obviously have much more faith in humanity and human political leaders than most people do. Part of their belief rests on the idea that “science is cumulative and nonlinear” – if humans are given an advanced textbook on sophisticated extraterrestrial technology, they won’t have the appropriate scientific context to understand it. Think about giving the plans to build a handgun to a caveman. Their solution is for us ‘cave people’ to share the advanced technology with others and work together to decipher and implement it.

Finally, Wright, Haramia and Swiney compare the first contact with extraterrestrials to the first knowledge of COVID … while some people embraced the scientists who were working together to find origins, treatments, vaccinations and cures, others distrusted the scientists and science in general – fearing that they might be hoarding the information to protect or benefit themselves or select individuals. Because of those fears and misconceptions, they suggest that scientists will have to harden the security to protect themselves from angry, fearful or jealous fellow humans. While that certainly makes sense, their final recommendation seems almost non-sensical in today’s world:

“Government decision-makers in general should be informed about SETI research and its implications so that they are better prepared to anticipate and deal with subsequent events if there is a signal detection. Means of doing this would include briefings for selected officials and legislators and the broad distribution of publications on SETI and its implications.”

Governments sharing information and working together to create a unified plan for response to the first contact with extraterrestrial intelligence. Does anyone really believe that is possible?

Let's try this again. An alien, astrophysicist, a philosopher and a lawyer walk into a bar. The bartender asks, “What are you having?” The three look at thne extraterrestrial, who is holding a strange yet sophisticated machine none of them recognize ... and the ET has its hand on what looks like a button. They look at each other and, as they run out the door, the yell to the bartender, “A panic attack!”

Now THAT is a more likely scenario.