New Disturbing Info on the UFOs and Drones That Have Been Swarming U.S. Warships and Bases

Between wars and UFOs, it is not a good time to be stationed on a U.S. Navy aircraft carrier, destroyer of other battleships. No one has yet to explain what exactly the so-called Tic Tac UAPs were that toyed with Navy pilots and ship radars in the aircraft carriers USS Nimitz and USS Theodore Roosevelt in 2004, 2014 and 2015. Videos taken by the pilots have been confirmed by the Pentagon, which also gave intelligence briefings about them to Congress. Because their shapes were so unusual and their technical performances – both above and below the water - were so unbelievable and physics-defying, the Tic Tacs have received the bulk of mainstream media attention. That is unfortunate, because the swarms of UFOs which have been harassing Navy ships off the coast of California between 2016 and 2021 are just as puzzling and quite possibly pose a more immediate danger to the military personnel … and to Americans. Fortunately, the intrepid investigators at The War Zone have been doggedly pursuing these encounters via Freedom of Information requests and recently received some startling videos showing warships being illuminated by these mysterious crafts and possibly even landed on. Let’s take a look at these videos and see if we can figure out if these are drones or something else … and who they might belong to. 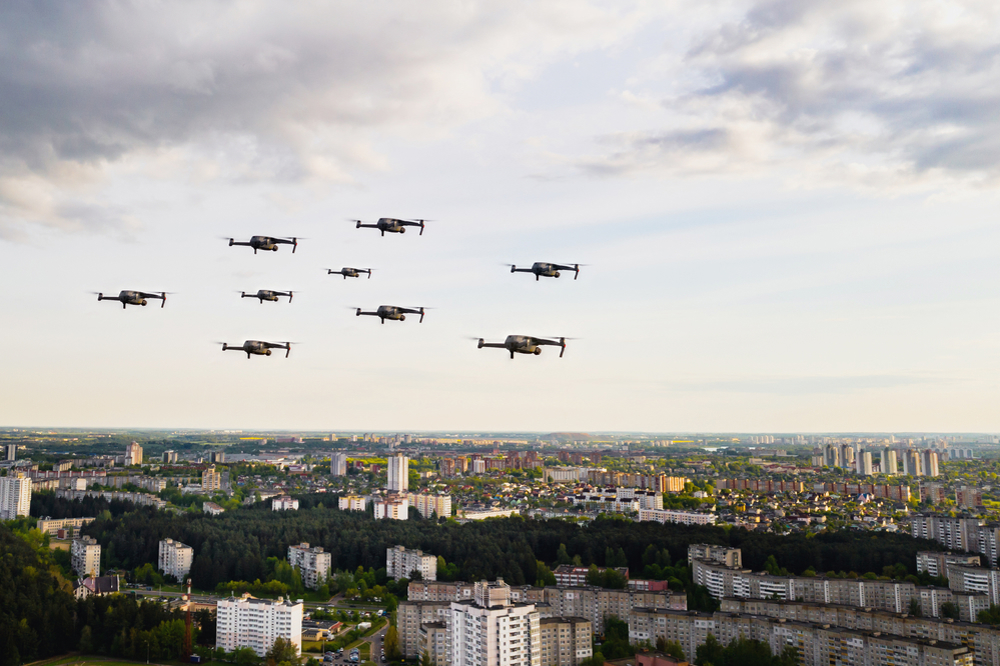 Before you say, “Meh … they’re just drones,” The War Zone obtained 35 (!) reports all relating to "Unmanned Aircraft System/Non Traditional Aviation Technology (UAS/NTAT)" which are apparently the terms used by the military when the objects in question are not UAPs or UFOs. Some of these incident have been reported on by multiple media sources, especially encounters on the night of July 30-31, 2019, with the USS Paul Hamilton destroyer. However, the latest data contained some disturbing new details about the swarm of at least four NTATs:

“At 0326L as PHM [USS Paul Hamilton] turned to course 180T, a second UAS was observed flashing the bow and bridge of PHM with what appeared to be a searchlight or photographic device.”

That’s right – at least one NTAT shined a light on the ridge of a US Navy destroyer and the ship responded the way all U.S. ships have been responding to NTATs, UAPs and other unidentifiable objects … it did nothing. As The War Zone puts it, “no countermeasures were employed and the Navy determined that there was no impact on the ship's ability to perform its assigned missions or operate safely.” This lack of response has continued to be one of the most puzzling aspects of all of the encounters from the 2004 USS Nimitz Tic Ta UFOs to the most recent swarms of NTATs or drones. Why no response … especially when the ships are so close to the U.S. coastline? Perhaps the new data on incidents in and around Hong Kong might shed some light on this.

On October 2, 2017, the USS Chafee destroyer was sailing into the port of Hong Kong when it encountered two unidentified drones, and one of these drones actually LANDED ON THE DECK OF THE USS CHAFEE! As The War Zone points out, this is wrong on so many levels. First, a US ship was landed on in 2017 and we’re just hearing about it now. Second, the other drone was apparently conducting surveillance and seems to have been allowed to leave unharmed. Third, both of these drones could easily have been equipped with munitions or a hazardous payload. Finally, there is no indication authorities in Hong Kong or China were notified, and if they were, what their response was. One more thing … where is the drone now? The report says it was confiscated by ship personnel, the SD card removed and “secured in a locked space.”

According to the newly released reports, the amphibious assault ship USS Makin Island had encounters with multiple drones near Hong Kong in April 2017, and the Nimitz class aircraft carrier USS Ronald Reagan encountered multiple drones on October 3, 2017, around Hong Kong. (Interesting side note: President Reagan spent six days in China in 1984 – the first president since Nixon to visit the country.)

There is no more decorated or sacred U.S. naval base than Hawaii’s Pearl Harbor – the location of the attack that pushed the U.S. into World War II. If there was any place where a drone encounter would elicit a response by the Navy, it would be at Pearl Harbor … right? According to The War Zone, on July 19, 2019, NCIS agents questioned a Chinese national who had been flying a small drone in the vicinity of the Rainbow Bay Marina near Pearl Harbor on the island of Oahu. The report states that "NCIS arrived on scene, conducted system background verifications and found no indications of suspicious activity. The drone operator willingly allowed NCIS agents to inspect and examine his possessions." However, this is not an isolated incident. The War Zone received multiple reports of Chinese tourists arrested between 2018 and 2020 for trespassing on various Navy installations and for taking pictures of the facilities – there were prosecutions, convictions and discussions about potential coordinated Chinese espionage efforts using private citizens and their drones.

Closer to the mainland and not in California were incidents at the Navy's base in Bangor, Washington, where top secret and highly specialized Seawolf class attack submarines, including the unique subvariant spy submarine USS Jimmy Carter, are located, along with a “major stockpile of the world's most powerful nuclear warheads.” A new report states the on the night of January 30-31, 2017, Marine Corps Security Forces Bangor spotted an Unmanned Aerial System (UAS) approaching from beyond the port security barrier. It turned off its lights as it flew at low altitude over Marginal pier, then took off and disappeared. The War Zone notes that explosive-handling operations were being conducted at this portion of the facility during this apparent surveillance.

These incidents are serious … yet the military response is puzzling. One or more of them have come to the attention of the FBI, but The War Zone states that many of these encounters have been “downplayed by the service.” Why?

As one might expect, The War Zone believes these 35 reports are just the tip of the drone/UAP/NTAT iceberg. The reports are minimal and incomplete. While it is highly likely these are surveillance and harassment exercises, they are hostile activities by adversaries or potential adversaries against U.S. military personnel. It is obvious that China is a prime suspect, but they may not be the only one. Is the U.S. military's seeming lack of response due to orders from above or, as The War Zone states, because “the U.S. military, as well as other U.S. government organizations, are still largely playing catchup when it comes to fielding counter-drone capabilities and developing the tactics, techniques, and procedures for how and when to employ them, especially in response to domestic incidents.”

Should we be more worried about extraterrestrials in UFOs or earthly adversaries in drone swarms? Kudos to the fine folks at The War Zone for giving us more facts to ponder … and more sleepless nights.

The Loch Ness Monster, UFOs and Aliens: A Bizarre Link For Sure!