For as long as they could look up and see it glowing, growing and shrinking in the night sky (and sometimes in the daytime), humans have pondered the origin of the Moon. The Greeks saw it as the goddess Selene riding across the sky on a horse. In Japan, the Shinto moon god Tsukiyomi was born from the right eye of the creator god Izanagi. On the astronomy side, there have been a number of hypotheses proposed, accepted for a time, rejected and replaced by later theories, and rejected again as new data is discovered via space telescopes and meteorite analysis. Those theories include capture of a wandering space body, an early rapidly spinning Earth expelling a huge chunk, a nuclear explosion inside the Earth, and even a merger of two moons into one. The most recent accepted theory coincidentally goes back to the Greek goddess Selene – a Mars-sized space object called Theia, the mother of Selene, crashed into the forming Earth, creating a large orbiting ring of Theia debris that eventually merged to form the Moon. That hypothesis checked a lot of boxes and seemed like the winner … except for one unexplained anomaly – if the Moon is made from Theia, why is its composition so much like Earth’s?

"This opens up a whole new range of possible starting places for the Moon’s evolution. We went into this project not knowing exactly what the outcomes of these high-resolution simulations would be. So, on top of the big eye-opener that standard resolutions can give you misleading answers, it was extra exciting that the new results could include a tantalisingly Moon-like satellite in orbit."

In a NASA press release announcing a new study explaining the theory published in The Astrophysical Journal Letters, lead author Jacob Kegerreis, a computational cosmologist at Durham University and a postdoctoral researcher at NASA’s Ames Research Center, reveals that not all lunar birth simulations result in the Theia/Earth collision and the slow accretion of Theia particles into the Moon. That seemingly solid hypothesis started crumbling after the first human visit to the Moon in 1969 when Alan Sheperd and Buzz Aldrin brought back the first lunar samples. Those rocks dated back 4.5 billion years and scientists were shocked to discover how closely their isotopes matched those of Earth rocks. For a time, the Theia theory began to morph – instead of the giant rock being pulverized and turned into a disc of debris, the new hypothesis was that Theia became part of the Earth and instead blasted earth debris into orbit. All the scientists needed was a simulation that would prove it.

That challenging project finally took place recently in a joint project between NASA Ames and Durham University under the direction of Jacob Kegerreis. The SWIFT program was designed to simulate the huge, complex and rapidly-changing gravitational and hydrodynamic forces going on during the collision of two massive space bodies. Such a massive task required a massive computer – so NASA turned to Durham for the use of its supercomputer COSMA. Running hundreds of iterations of SWIFT, COSMA simulated hundreds of Earth-Theia collisions, changing collision angles, collision velocities, spinning speeds and other variables to model all of the possible outcomes and Moon outcasts. In an interview with Live Science, Kegerreis explained how his team fine-tuned the simulation to a degree never before possible by increasing the number of particles created in the collision by many orders of magnitude – while previous simulations modeled between 100,000 and 1 million particles, COSMA allowed them to simulate up to 100 million particles. He compared the difference with a “model” many non-scientists could relate to.

"You might imagine that if you build a model car out of toy blocks to simulate how the car might break in a crash, then if you use only a few dozen blocks, it might just split perfectly down the middle. But with a few thousand or million, then you might start to get it crumpling and breaking in a more realistic way."

While this sounds like a new project for the fine folks at LEGO, Kegerreis and his team pored over the new models and were shocked the one that came up the most – a Moon which formed in a matter of hours from chunks of Earth and pieces of Theia. (Side note: Pieces of Theia sounds like a great name for a band.) Kegerreis says in the press release that this new model checks off some of the boxes left open by the previous Theia models where it explodes to form the Moon or it merges with Earh and kicks out the dirt to form the Moon, with both of those happening slowly over millions of years. Instead, the quick-and-dirty Moon theory explains the satellite’s wide and tilted orbit, its partially molten interior, and its thin crust. 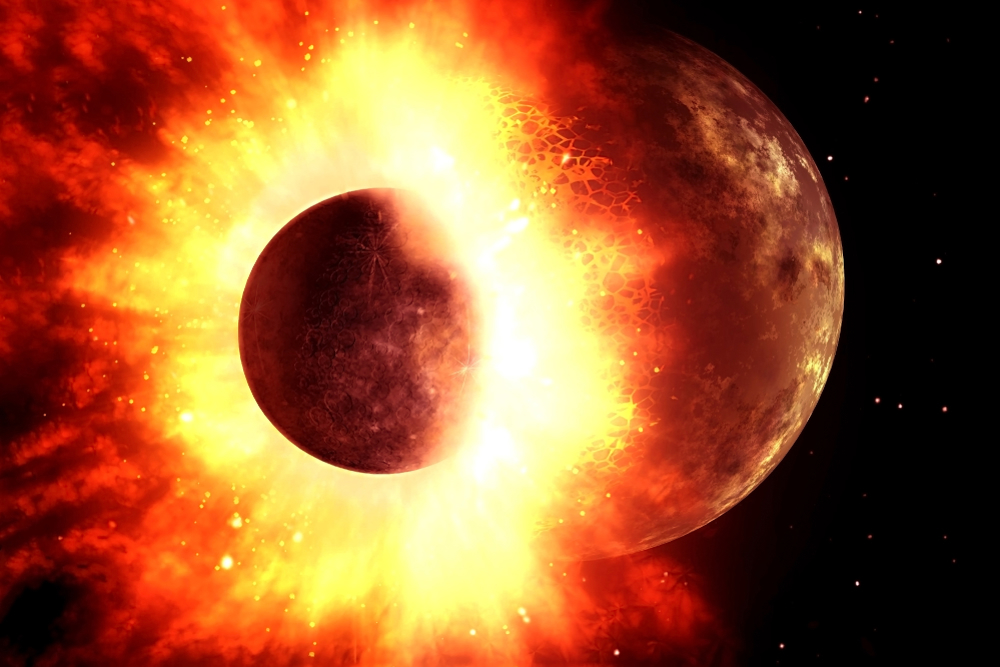 Is this a slam-dunk, drop the mic, say goodbye to the eye of Izanagi moment? Unfortunately, this is still just a simulation. To prove the theory, rocks must be extracted from deep inside the Moon – an exercise that is planned for the upcoming but slow to actually happen crewed Artemis missions to the Moon. Those would then have to be compared to rocks from the surface and rocks from inner and outer Earth.

"Even more samples from the surface of the moon could be extremely helpful for making new and more confident discoveries about the moon's composition and evolution, which we can then trace back to model simulations like ours. Missions and studies like these and many others steadily help us to rule out more possibilities and narrow in on the actual history of both the moon and Earth, and to learn more about how planets form throughout and beyond our solar system."

Who knew studying the origin of the Moon could be so sexy?

The Dark World of Witchcraft and Sorcery in Africa