Throughout the lore of many religions is the idea of angels. In Christianity they are usually depicted as ethereal, beautiful figures with white robes and sweeping wings, and this all seems like it surely must all just be an artistic representation and something that does not really exist in the reality we know. Or does it? Throughout the ages there have been occasional sightings in the sky of what seem to be actual, literal angels flying around, and here we will look at some rather strange cases of this.

A good deal of very cool reports of angel sighings comes from the files of Chris Woodyard, who is the author of The Victorian Book of the Dead, The Ghost Wore Black, The Headless Horror, The Face in the Window, and the 7-volume Haunted Ohio series. Our earliest report here comes from the year 1841, when that August a woman named Olive E. Coffeen, of Hillsboro, Ohio, was sitting outside of her home with a Mrs. Martha A. Ellis when in the sky they noticed “an unusual band or circle of light in the northern heavens.” As they looked on they were astonished to see what appeared to be a procession of figures in flowing white robes slowly marching across the sky, and as they gazed upon this astounding sight more and more people in the vicinity had noticed it as well, and were coming out of their homes to see it too. Ellis would say of it:

A glance in that direction showed a phenomenon which consisted of angel forms in solemn procession, marching with stately tread through the realms of space in full view. In the heavens, marching by twos, was a parade of what appeared to be human forms clad in flowing robes. As fast as one company consisting of from ten to fifteen couples would disappear from view another would take its place, and the vision lasted ten minutes. The forms were so life-like that seemingly the movements of the limbs could be distinguished. The people at the time were greatly excited at the angelic visitation and in several instances families carried invalids out of doors that they might view the scene. The occurrence took place between nine and ten o’clock in the evening. The forms of the spirit visitors were to all appearances, covered by a gauzy substance, and their existence in companies was visible to the eye through a space of probably thirty degrees in a northwesterly direction.

What was going on here? In 1874, a Rev. Colonel Granville Moody was preaching to his congregation in Ripley, Ohio, when he and around one hundred and fifty worshippers looked up to see what appeared to be a msjestic angel hovering above them. A report in the The Cincinnati Enquirer would explain of what they saw:

Yesterday evening, between 10 and 11 o’clock, there appeared suspended between the heaven and the earth almost a fac-simile of one of Raphael’s Angels. Thought not of the full stature of a well-developed human being, yet it was perfectly formed and as white as alabaster. The wings were outspread, with arms extended imploringly, and its revolutions were as rapid and beautiful as a bird, as it circled in mid air. Over one hundred and fifty of our best citizens, ladies and gentlemen, were witnesses of the singular spectacle, and gazed with admiration and awe. The testimony of all those who were fortunate enough to behold it is that there was indisputable evidence that it was not a female, although the form was as delicately molded and the limbs as perfectly rounded as the most perfect Eve that ever came from under the chisel of an artist. Probably it can be explained by some of the scientists. 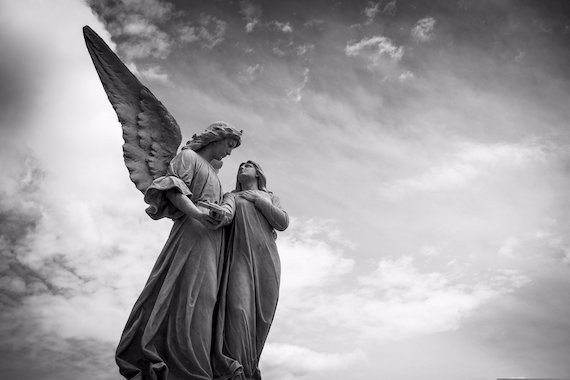 Apparently a nearby party saw the apparition too, and in total “One hundred and fifty of the best citizens of Ripley” saw this thing. Was it really an angel or something else? Who knows? A case from 1875 comes to us from the Zion’s African Methodist Episcopal church, in Indianapolis, where the congregation were singing a hymn. As they did so, “a phantom form of an angel” allegedly entered the church to hover over the pulpit in full view of the crowded congregation. A report in The Indianapolis Sentinel would say of it:

The figure was that of a human being enrobed in white, and with the wings angels are supposed to wear. The outlines were well defined, though the features of the face were shadowy and could not be recognized as having once belonged to any mortal human to the congregation. The phantom moved about slowly until the singing of the hymn was concluded—probably 10 minutes—then vanished mysteriously as it came. The Sentinel informant, a colored man willing to have his name mentioned as authority, solemnly asserts that the angel was distinctly seen by at least 200 colored people present in the church at the time of its disappearance. A great commotion followed, and the theme is still the talk of the town among the colored people, many of whom look upon the apparition as a forerunner of something dreadful —an omen of evil.

A curious detail to this case is that they would take the form of an angel appearing in a Christian church to be a sinister “omen of evil.” Why should this be? A case from November of 1883 revolves around the two-masted brigantine christened the Zebenia, which at the time was operating near Port Greville Harbour, Nova Scotia, in the Bay of Fundy, lying between Canada's Nova Scotia and New Brunswick provinces. On its way to Hillsborough, New Brunswick to load up the last of their cargo they hit a violent storm, and during this storm a Captain Hatfield looked to the sky to see a winged humanoid that “looked like an angel” complete with white wings flying through the darkened, rain lashed sky. This mysterious entity apparently came swooping down right over the ship and the terrified witness ran away from it. One hour later, the ailing ship capsized and sank, leaving Hatfield as one of the only survivors. What did he see out there and did it perhaps spare him?

Moving along to 1917, there was a flap of angel sightings over Greensburg, Kansas. That winter, a massive snowstorm hit the area, and in the aftermath amazed residents began sighting “the large image of a classical angel” moving across the sky and glowing brightly. The Fulton County News would say of it:

Residents of Greensburg, Kansas have been not a little disturbed over an apparition in the sky after a recent snow storm. There was no sun, and black clouds were behind it. It was large—shaped like the picture of an angel—dazzling white, and brighter than the strongest calcium light. One young man whose mother died just before the storm, believes that it was the spirit of his mother hovering over the town. An enterprising photographer got a snapshot of the apparition and a picture was sent by J. Frank Martin to Mr. and Mrs. P.P. Shives of town.

This particular angel was apparently even photographed by a man by the name of J. Frank Martin, who submitted it to the local paper to be printed. The following year, in 1918, there was another angel supposedly seen by numerous witnesses including police officers in Windsor, Ontario, in Canada. It began when reports began coming in of people seeing an angel in the sky “surrounded by a circle of flaming red.” When skeptical police arrived on the scene, they too reportedly saw the same thing, much to their surprise. At around the same time, people in Detroit, Michigan, which is directly across from Windsor, also were reporting it, and it was described as being too bright to be the aurora borealis, which was faintly visible from this part of the continent.

Sightings of angels have come in from more modern times as well. In more recent years there is an account from the site LiveAbout, which supposedly happened in the 1980s. The witness, called “Lewis L.” says he was on his way to work in Mariposa, California, and stopped a person trying to steal his car. He called the police, and as they waited he noticed something strange in the sky, three rather large clouds in a single-file formation that were almost overhead, and he explains what happened next:

Then I saw it. A shiny object exiting from the first cloud and entering the next and then coming out of that one. It was shiny, like brightly polished chrome, and moving at a good speed. I couldn't make out the shape. That's when the object entered the last cloud. From there it was nothing but open sky. When it emerged, my life changed. There against the richness of the blue sky was a silvery shape that seemed to have arms and legs! It was so beautiful to look at. At the same time, it had the appearance of metal. It looked like some kind of ship with a strange design. The best way I can describe it is it looked like silverware in the design of the stickman children draw. It was huge, moving fast and made no noise. As it sailed overhead, some of the limbs would move up and down, giving the impression of being alive - a living entity! It made a couple of rolls, reflecting the sun in every direction - just beautiful ... oh my god, beautiful! As it started to fade away from my view, I found myself short of breath and with tears running down my cheeks. It had that much of an effect on me. I began thinking maybe that's what an angel looks like. Maybe not! 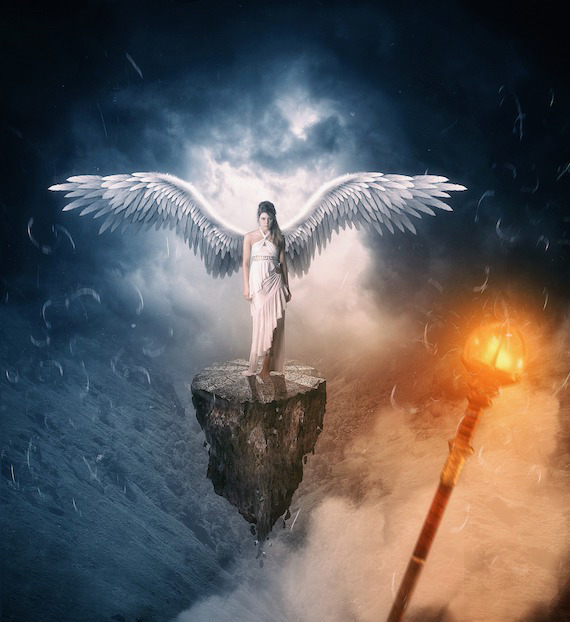 This report is curious because it sort of blurs the line between a report of an angel sighting and a UFO report. What did he see that day? Very odd, indeed. Even more recently still is an account from Lon Strickler’s site Phantoms and Monsters, which seems to describe a whole group of angels in Detroit, Michigan. The witness says:

On August 19, 2002 at about 6 PM there was a storm heading east towards Detroit, MI. Lightning was flashing. No thunder. Rain had not started yet. I was driving my work truck when a flash of lighting lit the sky, I happened to look up and what I believed to be the Fisher Building approx. 50 floors high with a big red lit ball on top. It appeared like birds but only too big to be birds. Because they covered the ball, it appeared they were startled from the lighting and they flew into a boomerang type formation. There was a yellow glow at first turning to red as they drifted southeast, towards Canada. When the lighting lit up the sky, the top of the building lit up white. That's when it appeared to me that Angels were taking off. I know it sounds silly but this is what I saw. I was not drinking nor do I use drugs and had a restful night’s sleep the night before.

What are we to make of such cases? Are these just misidentifications, atmospheric phenomena, or tall tales? Or could it be something more? Could angels, or at least something resembling them, actually be flying around through the sky? It all certainly is an odd little corner of the weird, and I leave it for you to decide.

Don't Laugh! The Key to Finding Extraterrestrials May Be Laughing Gas