When it comes to giants, Goliath is the 800-pound gorilla in the room due to his story being told in the best-selling book in the world and his mythical battle against a little guy (aren’t all battles of giants against little guys?) named David being a go-to description of so many sporting events. It seems that all cultures have giant legends -- Cyclops, Gargantua, Paul Bunyan, Orion, Kumbhakarna (a Hindu giant), Jentil (Basque giants), Hrungnir (Norse), and Atlas are just a few of the better known large humanoid beings. However, other than the football team of New York or the baseball team of San Franciso, giants don’t appear much in the news these days. This week was an exception this week with word from Ireland that the Giant’s Causeway – a road said to have been built by the Irish giant Finn MacCool (Fionn mac Cumhaill) has been explained and the legendary Finn will be disappointed to learn that the real builder took just days to complete it. Was Finn outdone by another cool Gaelic giant? 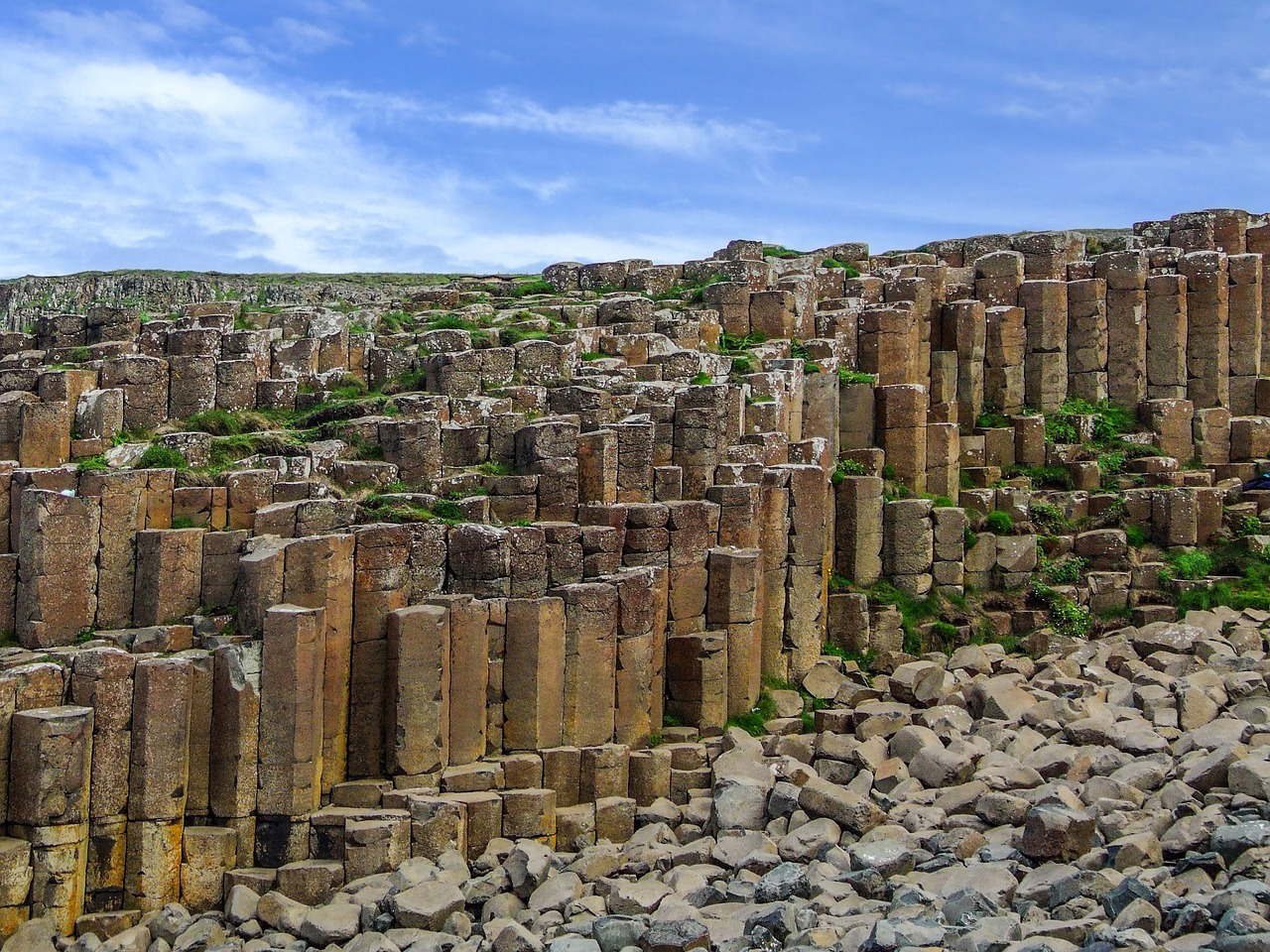 For those unfamiliar with the structure, the Giant's Causeway is an area of about 40,000 interlocking basalt columns located in County Antrim on the north coast of Northern Ireland. It is a World Heritage Site, a national nature reserve of Northern Ireland, and in 2005 was named the fourth greatest natural wonder in the United Kingdom – even though many of the millions who visit it annually think the causeway was built stone by stone by Fionn mac Cumhaill, an Irish hero with a gigantic reputation that morphed into a gigantic size, and a magical thumb that gave him the wisdom to do great things … like build a road to defeat an enemy giant.

The tales of the adventures, hunts and heroic feats of Finn MacCool come from the Fianna Cycle or Fenian Cycle (an Fhiannaíocht), a collection of early Irish literature about the mythical hero Fionn mac Cumhaill and his warrior band, the Fianna. The narrator is Oisín, the son of Finn and a poet. In in the narrative “The Boyhood Deeds of Fionn,” young Finn learned to hunt and acquired the "Thumb of Knowledge" after eating the Salmon of Wisdom – a fish who was once a seer. Already a famous hunter at age 10, Finn was sent to slay Áillen, a fire-breathing man who played dulcimer music that put men to sleep so he could destroy their towns and steal their treasure. Finn used a special music-muting spear to defeat Áillen and the town, but was still considered to be a marauder, an outlaw and a leader of a gag of other young roving hunter-warriors.

Finn’s reputation was changed, although not necessarily for the better, with the building of the Giant’s Causeway. In the most popular version of the tale, a giant named Benandonner or the Red Man roamed Scotland. Benandonner gets into a shouting match across the water with Fionn, who challenges him to a fight, Fion builds the Causeway using rocks from Antrim and crosses over, only to find Benandonner is a real giant. Benandonner chases Fionn back over the causeway to Kildare – Fionn loses his show and a giant boot-shaped rock marks the spot. Fionn’s wife disguises hm as a baby in a cradle, then tricks Benandonner into eating a pancake with an iron griddle inside it, causing him to break three teeth. When he sees Fionn’s giant ‘baby’, he thinks Fionn must be bigger than him and runs back to Scotland. Finn MacCool is said to have grabbed a chunk of earth and threw it at Benandonner. The rock became the Isle of Man, and the hole left where he took it from became Lough Derg, the largest lake in Ireland.

There are other versions of the tales of Finn MacCool and the building of the Giant’s Causeway but you get the general idea. Some historians believe Finn was based on a real person and his feats and the Thumb of Knowledge came from Norse-Gaelic folklore. What we can be sure of is that the legend of the Giant Causeway is nowhere near its real cause. That was originally thought to be that a river valley in the area was filled with lava from a volcanic eruption 50 to 60 million years ago. The molten basal lava volume was greater than the space in the valley and rose above it. As it cooled, it solidified, contracted and cracked into about 40,000 similarly shaped columns that formed the Giant’s Causeway over thousands of years. 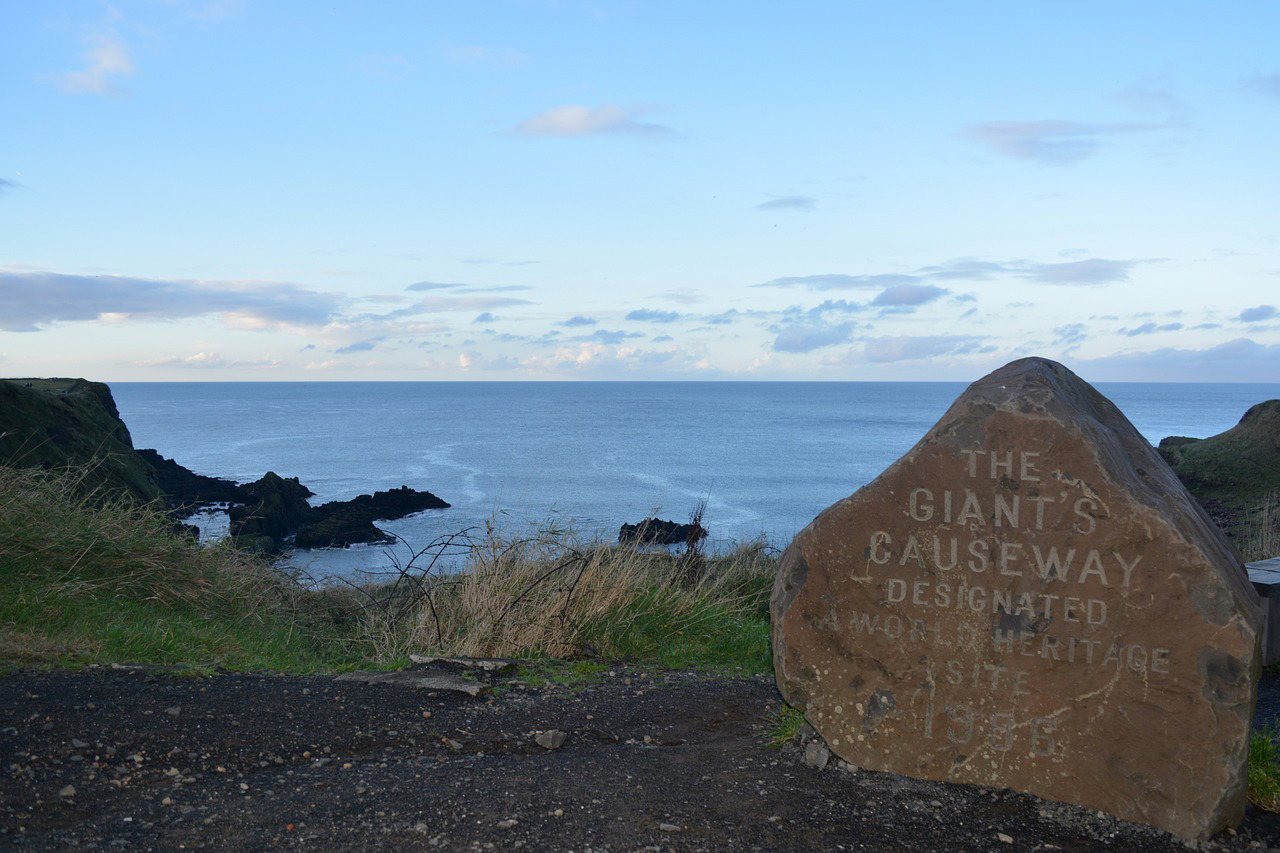 Like the story of Finn MacCool, this scientific explanation for the Giant’s Causeway was accepted by everyone … until Dr. Mike Simms, curator of natural sciences at National Museums NI, decided to question it. Specifically, he wondered why the columns existed only at sea level. He thinks there was no river valley but instead the hot lava itself caused lower layers of older lava to crack and erupt.

“Eroding a river valley is rather like cutting through a layer of cake to reveal layers beneath the surface. In my interpretation, what we actually see are layers of older rock sloping towards the Causeway – more like a badly baked cake that has sunk in the middle. I believe the ground subsided as lava moved up and erupted at the surface. The lava filled the depression, creating the conditions for the columns to form.”

Even more shocking, the Simms explanation allows the Giant’s Causeway to be formed in days, not thousands of years – a tremendous feat worthy of a giant story like Finn MacCool’s. in his interview with Independent.ie, Simms credits another geologist, a young Brazilian man on a field trip he as leading in 2012, who asked his how long it would take to erode the supposed river valley, and that inspired him to do the research that resulted in his new hypothesis.

“It goes to show that even at world famous landmarks such as this, new discoveries can be made from a simple observation.”

Simm’s discovery does nothing to dim the glamor and importance of The Giant’s Causeway, Northern Ireland’s only Unesco World Heritage Site and a major tourist attraction. Nor does it affect the legend of Finn MacCool and his magic thumb from the Salmon of Wisdom.

We could sure use a few Salmons of Wisdom today.

A Handful of Strange Creatures You May Not Have Heard Of: But You Should!