A farmer in Ohio went out to his barn to check on his animals and found one of his horses missing. A quick check of his security camera footage showed nothing unusual. When he inspected his property, he found the horse dead and mutilated in a nearby creek. The local sheriff’s department was called in to investigate and their report stated that a “non-human” was responsible. A “non-human”? Why did the report not say “animal”? Ohio is a state known for many Bigfoot/Grassman sightings, along with some Dogmen, Mothman and other strange creatures. It has also had its share of unexplained cattle mutilations. What was the “non-human” that left a horse dead and mutilated in a creek in Ohio?

“[The farmer] stated today he found his barn torn apart and was missing a horse, he stated there was blood in the barn and the back door was busted open. He found the horse in the creek in the back of the property dead.”

This grisly and mysterious story takes place in Ross County in southern, Ohio – an area known for the Serpent Mound, Fort Ancient, Mound City, Seip Earthworks and dozens of other Native American earthen mounds. The history of this area dates back to Paleo-Indians, who lived there in the 13000 BCE to 7000 BCE time period and the land had a deep spiritual connection to a number of Native American cultures over the centuries. The Scioto River flows through the heavily wooded area, offering plenty of food and hiding places for both the usual and the possible cryptid wildlife.

“He has cameras and stated he checked it already and [no one] had been there since he was yesterday.”

According to The Scioto Valley Guardian and The Scioto Post, the unnamed farmer called the sheriff’s department immediately because the bottom wire of his electric perimeter fence had been cut twice and he suspected there might be a connection between this and his missing horse. Security camera footage was inspected and no intruders – human, animal or non-human – were seen. Unfortunately, the sheriffs did not have good news for the farmer after perusing his property.

“Upon further inspection, we were able to determine that a human did not do this to the horse….”

The report stated that that the horse had been attacked somewhere else and “somehow” ended up in the creek where it died. News of the killing quickly spread through the rural area and – with the sheriff’s office deliberately not specifying an animal – suspicions quickly turned to Bigfoot. The YouTube site Bigfoot Lake covered the story and commenters told of other Bigfoot events and Dogman suspicions. Most Bigfoot studies put Ohio in the top five states for the most Bigfoot sightings and the state has three of the top Bigfoot howl recordings, so the suspicions are well warranted. The Bigfoot Researchers Organization has three reports in Ross County. The most recent was in December 2002 near State Route 772 and State Route 50, where a hunter claims to have encountered a Sasquatch.

“I walked closer to see what it was and there was a creature about seven to eight feet tall standing and it was staring me down. I thought it was going to attack me. I was frozen with fear. It just stood there so I started to walk in the other direction when it let out a screeching howl. I stopped and my heart was racing and I couldn't breath. I turned back around and it was about 20 feet from me. I got the idea to slowly put my gun on the ground to show I wasn't going to mean it harm. The creature started to walk towards me so I stood very still. It looked at me with big brown eyes. It started to walk away and I tried to follow but it started running too fast.”

Another sighting occurred in the Ross County in the fall of 2002 and a third was reported in the summer of 1980. The witness and his father were fishing in Deer Creek when first the father and then the boy saw a creature.

“I too thought it was a tree, but as I looked at it closer I could see hair moving in the slight breeze along it's side and head. It was a reddish/brown color and not extremely long, but long enough that I could see it moving. The creature was standing amid some brush that was growing along the creek, and was visible from just above the waist to the top of it's head. It was very tall, my guess would be about 8 feet high or so.”

Could the horse killed and mutilated in Ross County have been attacked by a Bigfoot? Unfortunately, neither of the media reports show photos of the corpse nor the bloody barn with its destroyed door. Ross County is a mere two-hour drive (about 130 miles) from Salt Fork State Park, which has had a number of Bigfoot sightings. It also has had its share of UFO sightings, which leads us to the possibility that the horse killing could have been a livestock mutilation of the kind that are prevalent in the Pacific Northwest and often blamed on aliens taking samples, religious cults or secret government experiments.

Ohio has had a few mysterious cattle mutilations – in fact, there were so many of them in the early to mid-1960s that they caught the attention of John Keel, who came in 1966 to investigate them in the Upper Ohio River Valley around Gallipolis, Ohio. Yes, that’s the same John Keel of Mothman fame and Gallipolis is at the other end of the Silver Bridge connecting it to Point Pleasant. Could this latest horse killing signal the return of the feared winged cryptid? There have been other cattle mutilations reported in Ohio, including in Carroll County in 2019, about 2 hours from Ross County, and in 1984 in Union County, about 90 miles from Ross County, when the mysterious death and mutilations of at least 78 chickens, 24 cats and 8 dogs were serious enough to be covered by The New York Times. While Ohio has its share of coyotes and a few bears, few of these reports blame them or even dogs. While cults get a mention (but thankfully no Chupacabras), the causes are generally unexplained mysteries.

Which brings us back to the mysterious “non-human” horse mutilation in Ross County, Ohio. Why did neither the sheriff’s department nor the local media mention an “animal” … not even a suspicion of wild dogs, coyotes, a lynx or some other wildlife? A number of commenters on the social media sites are concerned about this omission … and the use of the term “non-human.”

More on the Controversy Surrounding Unknown Apes: There Are More Than You Might Think 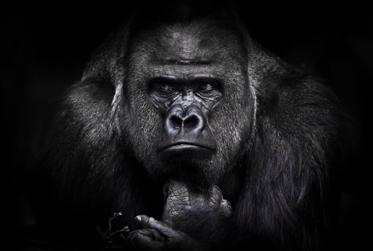 More on the Controversy Surrounding Unknown Apes: There Are More Than You Might Think