A Bizarre Alien Abduction in Austria and a Trip to Mars

One subspecies of alien abduction accounts that seems to be pervasive especially in earlier reports is that of those abductees who claim to have met aliens not from some far off place somewhere in the darkest reaches of our galaxy, but right here within our own solar system. As far as we know, there is no life here except for us, certainly no other spacefaring race, yet such accounts are consistent within the lore. Here we have people claiming to have been to alien civilizations on the moon, Venus, Mars, and Saturn, which, far from the uninhabitable watelands we know them to be, are supposedly teeming with life and technologically advanced civilizations. So let's look at one such bizarre journey to what the witness claims was Mars, and its apparently flourishing civilization.

In May of 1951, an unnamed witness was working for the United States Occupation Army in Austria and on this evening he was driving home in the vicinity of Salzburg, at 11:20 p.m., when he noticed someone step out of the brush by the side of the road. It was so dark that he could only see the figure’s outline, but he could see that it was holding a long, thin, pencil-like thing in its hand. The mysterious figure then pointed this device at the witness and it made a clicking sound, after which the witness found himself to be completely paralyzed, the car veering off the side of the road to come to a stop. The figure then approached and he could see that it was no person, but rather a bizarre entity with a rigid and cylindrical torso round like a tin-can, no neck, a transparent near-spherical helmet, and a two-piece suit with tight-fitting legs that merged into its toes. Protruding from its round body were two short little arms that ended in three fingered hands. Its head was also slightly cylindrical, high, bald, with a white skull extending up and back from a wide, heart-shaped face, and set within this face were two large and compound eyes, like those of an insect, its mouth was a slit, and it had only holes for a nose. A 1967 article by Charles Bowen called Fantasy or Truth? A New Look at an Old Contact Claim says of what happened next:

The stranger placed a black square plate on the witness chest and strapped it around his back. He could hear a dog barking in the distance, but he couldn’t hear him walking. He must have walked very easily. He could see his outline as he walked around him. After he strapped the plate on him he walked in front of him, and pointed the thing in his hand at the plate on his chest rather than at his head like before. He walked away and pulled the witness after him. He couldn’t move or walk, but he just pulled him along after him. He wasn’t actually in the air, but his full weight wasn’t on the ground. It seemed as if he was light. Behind the brush was a small field. In the field hidden from the road, was a round object about 150ft in diameter. It was dark, and he couldn’t tell what it was. His first thought was that a spy had captured him for some reason.

The ‘thing’ that led him sort of roe from the ground and took him after him to the top of the object. He did something, either stepped on something or pushed some button, and a door opened and he pulled him after him down into the dark. He was plenty scared and he wondered what would happen next. He got down into the dark and he could finally feel a floor under his feet. He knew that where he was either glass or plastic, because the stars could be seen shining up above. Then he saw the outline of what looked like a door, and he pulled him through into what he later found was a room of glass or plastic. The stranger kept his finger or what the witness thought was his finger but later saw was some form of pencil shaped object, pointed at the witness all the time, then when he was in the room, he took it off him and he sank down on the floor. He went out and the witness could see his outline. There was a sort of shaking sensation, and he knew the door to the room had shut. The next sensation he had was a sensation of rising up into the air. He had never flown in his life. 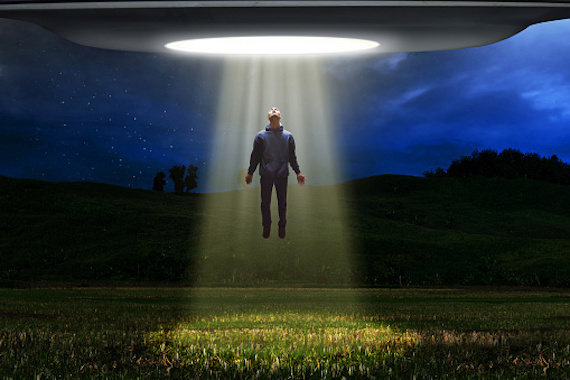 The witness claimed that he could see the Earth fall away through the craft’s transparent walls, and that he and the entity “flipped over” as they reached the “zone of gravitational neutrality between the Earth and the Moon.” They flew past the moon so close that he could see the craters very clearly, and then they continued on until they reached another planet, red in color, which he surmised to be Mars. Bowen would describe this fantastical new place and the series of strange events that would unfold there:

He looked out over the land and it looked like “paradise”. As they went down he looked over the land and on one side there were red fields. On the other side there was what looked like gray green fields. Some places in the fields were what looked like big chimneys rising from the ground. It was bright daylight and the sun was shining with no clouds in the sky. They were approaching the red fields and he could see rivers with blue water in them. The rivers ran straight and at intervals there were bridges built across them and he could see roads. The bridges were just like our bridges. From high up he could see no sign of life. Then they glided to a field that was filled with the saucers like he was in.

There appeared to be hundreds of them. They were of different colors, gray, gold, and silver. But there were no black or red ones. The driver stopped the ship about a quarter of a mile above them by just pulling a lever. Then they went straight down until they were about 20 or 30 feet from the ground, and he parked the ship on a high platform. As they went down he could see the same kind of people were in them like his driver. When they got to the platform the driver pulled a lever and the glass slid back and he went outside. He put the pencil-like thing to his chest and slowly dropped to the ground like a falling leaf. He then started to walk very fast along to the third or fourth saucer. He pointed the pencil at his chest again and sort of jumped up inside the ship. He was inside that ship for about 10 minutes.

The witness could see that the creature in the other ship was smaller than the driver of the ship he was on. While he was inside the ship he looked around at the other saucers and he could see the same type of people. Suddenly quite a way away he saw two ships that had people from Earth on them. One ship was sort of dirty looking and there was one man, one woman, and two kids in it. In another saucer nearby that was kind of golden he saw one man and one woman. He was going to wave at them but he felt scared. He was waiting for them to wave but they didn’t wave. After he saw them he thought that he would have to stay there with them now. Way off in the distance by the river he could see things moving. They were dark, but he couldn’t tell what they were. Down on the ground he could see large red flowers growing. They looked something like our sunflowers. There were some green patches between them, but there were flowers as far as the eye could see. The earth could be seen in patches too and it was just the same as our Earth. He started thinking that he must be on Mars. Then the driver of the ship came back from the other ship. He got back inside and closed the door again. 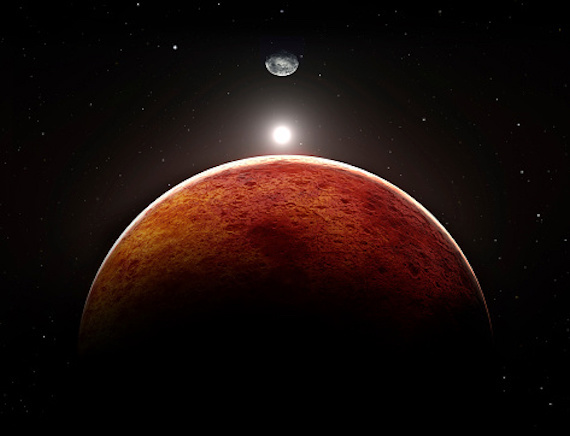 After this, they flew off again, and after some time approached Earth and the moon once again, coming in so fast that the witness thought they were going to crash, but they smoothly and gently entered the atmosphere and made their way to the place where the witness had been picked up. The entity then pulled him towards his car and the witness feared at this time that the thing was going to kill him. However, it put him back into his car, removed the plate that it had put on his chest, and departed in its ship. At no point did the creature make any attempt to communicate with the witness, so we are left to wonder just what all of this was about, and indeed whether any of it really even happened at all.

It is interesting to note that the witness claimed to have been brought to Mars, and considering that this was 1951, at a time when our knowledge of the red planet was crude at best, there was the idea at the time that it might have a civilization living there, and that it might have rivers and forests and be inhabitable by aliens. Indeed, many thought the same about other planets such as Venus and Saturn, with many alien abductees claiming to have been to these planets as well, and to have seen similar sights while there. It does not add up at all with what we now know about these planets, and this account follows the same pattern of other abductee’s trips to other planets in the solar system, sounding more like a pulp science fiction story than anything that fits scientific reality as we know it. What was going on here? It is yet another alien abduction account involving traveling to strange alien worlds within our own solar system, and it is all really damn strange at the very least.