A Strange Flap of Encounters with Mysterious Submarine Objects in Norway

When most people think of unidentified mystery objects zipping around, they may immediately think of UFOs, those puzzling aerial phenomena that have left us scratching our heads for many decades. Yet just as strange and not as oft-reported are these objects manuevering through water, entering or leaving lakes, rivers, or the sea, and generally showing that they have more than one domain on this planet. Typically called "unidentified submarine obects" or "unidentified submersible objects," USOs, they occupy their own little weird corner of the UFO phenomenon, and here we will look at a very strange series of such encounters that occurred in the country of Norway.

The earliest report in a flap of some sort of unidentified flying object flying in and out of Norway’s rivers and lakes allegedly occurred July 18, 1946 at Lake Mkøsa. At some time around noon on a clear day, a “strong whistling sound” was heard by residents, who looked to the sky to see a cigar-shaped, metallic object with wings on its nose that seemed to flap “as if made of fabric” come flying in towards the lake so low that the tops of the trees swayed as it passed. The object looked very much like a rocket, but no flame or any source of propulsion could be seen and it did not look like any known rocket that anyone had ever seen before. The object then flew out over the water and did a sudden dip to go crashing under the surface, causing no explosion and only a splash of water. Some witnesses would claim that they then saw it cruising through the water before descending into the murky depths. The Norwegian Defense High Command purportedly conducted an investigation, but their report has never been released. What was this thing?

Another case happened in 1952, when in October of that year a witness by the name of Johannes Nordlien was at the Lågen river when he was startled by a “howling, jetlike sound.” He then saw a large, saucer-shaped object measuring 4 meters in diameter go flying by not far away. The mysterious object then dipped towards the water and the howling sound stopped, after which it plowed directly into the river. He would claim that when he approached the river, the water was bubbling, churning and steaming as if boiling. 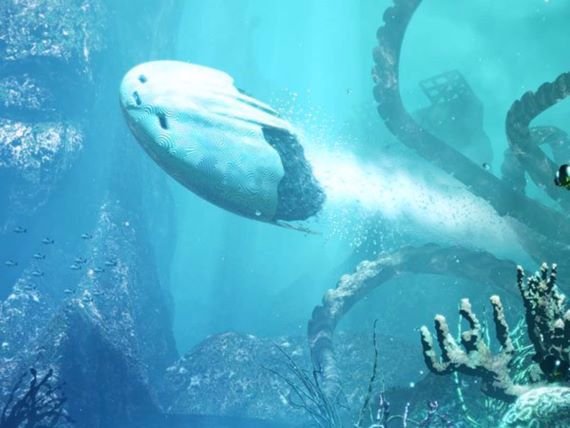 From just a few years later, on June 1, 1958, four fishermen witnessed a silent “unknown aircraft” come down to enter the Alta fjord and send up a column of water. Thinking it was perhaps a crashed plane, they called it in, and when the frigate KNM Arendal and the submarine KNM Sarpen came to investigate they found no sign of a crashed aircraft but rather sonar signatures of an unknown underwater “mobile object” moving at high speeds. The following year, in the winter of 1959 witness Lorentz Johnsen saw a mysterious object described as being “like a small bus with a number of windows along its side” heading towards the Namsen fjord. As it flew over the water, it suddenly glowed brightly and seems to have experinced an explosion of some sort. Johnsen would say of what happened:

It looked like sort of a cover was torn off the object in one piece. This, along with a number of other things, fell into the water. I especially noticed three black ‘columns,’ about two meters long and one-half meter in diameter. The cover itself was torn off in one piece and reminded me of a curved sheet of metal. This was fiery red at first but grew black before reaching the water.

The object then apparently hit the water but then moved off into the depths under apparently intelligent control. In November of 1972, witnesses reported seeing an object that looked somewhat like an aircraft cruising about in the waters of the Sogne fjord. Later that evening, another set of witnesses claimed to see a brightly glowing object rapidly moving through the water in the same area, and the following week five police officers saw an object resembling a submarine but moving very rapidly in the same general vicinity. Navy frigates were brought in to search for the object and even located it at one point on sonar. However, when they dropped depth charges they had no effect, and the unidentified underwater object sped off at a speed far exceeding what any submarine would have been capable of. The following evening, four silent “rockets” that like looked like red balls of light were seen shooting up from the water at Hermansverk, in the same general region, and the next day the Navy once again located a mysterious underwater object that they fired on with an antisubmarine missile, but the explosion apparently had no effect on it and it sped off into deeper waters. A massive search would be launched involving over 30 Naval vessels but the object could not be found, although some of the vessels reported sonar contact with something very fast in deep water. What was going on here? The following year, July 4, 1973, an Erling Bakke and his wife were in the same area when they spotted a “peculiar vessel” that was moving across the surface of the water at a high speed, estimated as being 25 feet long and six feet high, with some sort of strange protrusion on top. Bakke would say of it:

When we first spotted the strange object, which had a speed of at least 100 kph along the water. We at first thought it had to be some sort of speedboat, and we were amazed at people going that fast. But suddenly the object rose up at a 45-degree angle, and a moment later it was gone. Then my wife and I became aware of having witnessed a UFO up close. And it was a wonderful experience. 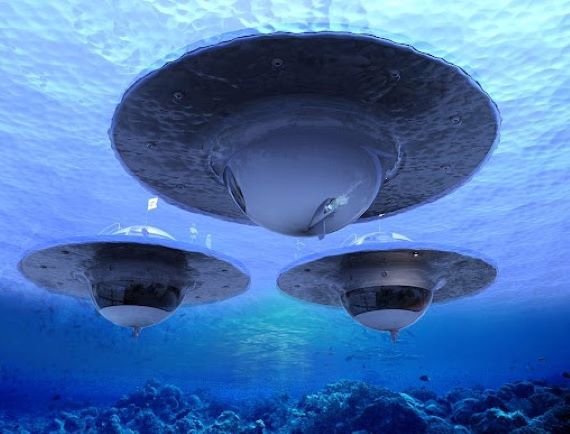 In later years we have another flap of mysterious encounters of this kind. On April 27, 1983, a group of scuba divers at the Husnes fjord sighted a “submarine-like vessel" and reported it to authorities. A search was launched by the Norwegian Defense involving ships, submarines, and aircraft, and in the late afternoon they made sonar contact with a fast moving underwater object south of Leirvik on Stord Island. They fired an anti-submarine missile at it, but the object sped off and could not be hit. The next evening the object was detected again, but this time was not fired on because of fears the missile would hit a nearby Norwegian submarine. In the coming days the military played a game of cat and mouse with the mysterious object, detecting it and firing on it on several occasions with missiles, torpedoes, and depth charges, both from ships and aircraft. In total the object would be bombarded with dozens of missiles and depth charges, yet every time it was either unfazed or able to evade the onslaught.

A few years later, in 1990, a Norwegian military vessel, the KNM Stavanger, had a sonar contact with an “unknown U-boat” off of the Ona lighthouse. When the ship sent out international warning signals they received no response, and proceeded to fire three missiles at it to no effect. Whatever it was reportedly did several underwater maneuvers deemed impossible for any known submarine to pull off, before shooting off into the depths at an astonishing speed. A search of the area turned up nothing. Apparently a recording was made of the sonar signature, but the Norwegian authorities never released it. Another vessel in the same area at the time allegedly also had a run-in with the strange underwater object when it passed directly underneath them, circled them, and then sped off before any retaliatory action could be taken. In yet another encounter another vessel reported seeing a glowing object eject from the sea to go flying into the sky.

It is all pretty wild, and we are left to wonder. Why were these objects harrassing the waters of Norway during these years? What is it that they wanted and what were they doing? Is there a perhaps rational explanation for all of these reports, and if so, what is it? It certainly is all a rather compelling and bizarre addition to the USO phenomenon, and further evidence that strange unidentified objects are not to be found only in our skies, but beneath our waters as well.