A Very Strange and Obscure Alien Abduction in Poland

Looking through UFO and alien abduction reports, one is at some point likely to notice that a good many of the more reported upon cases come from the United States. It can sometimes get to the point where one might think that these things only ever happen in America, but this couldn't be further from the truth. Many very odd and equally mysterious accounts have come in from all over the world, and have merely been buried because they have never blossomed out into the greater lore outside of their own countries. Here we will look at one such obscure case that apparently happened in the country of Poland, and while very famous in its homeland has never really managed to meet the wider world of ufology.

It was May 10, 1978, and a simple and humble farmer by the name of Jan Wolski was driving his horse cart in early hours of the morning, returning from the village of Dabrowa towards Emilcin, in Poland. It had all been a rather mundane and ordinary day up to that point, Wolski’s trip perfectly routine and uneventful in every way, but as he watched the dusty rural road pass by his daydreams were interrupted by a rather bizarre sight up ahead. Walking along in front of him were two short humanoid entities about 5 feet in height that had green faces with slanted eyes with “some white in their eye corners” and protruding cheekbones, wearing one-piece suits of some sort and “black outfits covering their foreheads.” The two creatures didn’t seem to notice him at first, as they seemed to be in a heated discussion, but when they did see him they slowed down their walk and each went to one side of the road. As Wolski passed between them, they then both casually hopped onto his cart as if it was the most normal thing in the world. They then continued talking to each other in a jabbering alien language that was described as sounding like “a petete petete te” over and over again in a staccato and incomprehensible delivery. Now that he was closer to the beings he was able to see more details of their appearance, Wolski would say of them:

I noticed that they were small, of the same height and all of them rather snappy in nature. I noticed then one thing, i.e. around the each one finger there was a thin and tiny fin [he means webbed hands]. And on their upper necks, in place where hair began, they have something resembling lumps. It was round and protruding but I don’t know about its nature – whether it was an anatomical part of them or they had something hidden them. I didn’t notice any hair since their whole body was covered with the suit that also obscured part of their foreheads. But they had no brows I think… They were completely dressed in it – the same one-pieced suit covered their legs and heads. They had no shoes. 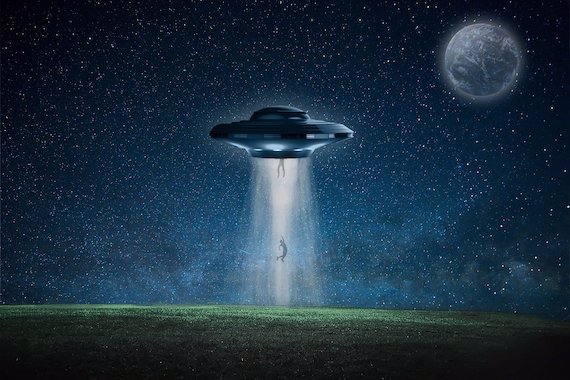 Understandably unsettled by these two strange visitors, Wolski started to bring the cart to a stop, but the beings actively gestured to him to keep on going. He felt oddly compelled to do as he was told, and after some time they came to a rectangular “purely white craft” like “polished aluminum” hovering over the ground, with 4 “barrels” on the craft corners with black “drills” that seemed to rotate around its axis with great speed as they emitted a humming noise “like bumble-bees in flight.” There was a platform leading from the hovering craft down to the ground. Perhaps sensing his apprehension, one of the entities urged him to keep moving forward, and Wolski would say of what happened next:

We were driving ahead for some time and then ordered me to stop – they didn’t speak in words but expressed it with hands to stop. So I understood it and began urging the horse to stop but one of the beings caught the reins and pulled back urging the horse to stop (It was afraid of the craft.). And when it stopped they got off the cart – in the same way as they previously got on and they gave me a sign with hands to go with them. I tied my horse, then got off and went after them toward that machine. There was a tiny elevator of some kind for two people to hold – maybe it couldn’t carry two large people but surely could delicate ones… And then he went forth and set his foot onto this craft, I followed him and it soon lifted up rapidly – in front of that craft door. And the whole craft could be about 4 meters above the ground, maybe 4.5 meters.

Once on the craft, the first thing Wolski noticed was that the interior was a grayish black in contrast to the white exterior, and that there were several crows lying near the wall that seemed to be somewhat paralyzed, and were “moving with their wings, legs and heads but weren’t moving around.” He then noticed that there were two more of the humanoids inside the craft, which urged him towards them and then gesticulated towards a bench of some kind. It is interesting to note that they communicated with him entirely through gestures rather than the telepathic messages most abductees describe. When Wolksi reached the bench they gestured for him to sit, and he explains of what happened next:

They showed me through gestures to dress down. When I was half-naked, to my waist – and maybe not fully because when I was undressing I removed my jacket, then a blouse with 4 buttons… And when I began to undo two upper ones, the being that was on the elevator with me undid the two ones from the bottom. When I was undressing the fourth being appeared – that one who remained on the ground. Well, when I was partially undressed to my waist and stood in place I received an order to undress completely. So I took off my shoes. One of the present beings then appeared in front of me with an appliance in a form of two dishes combined in its hand. He neared “the saucers” to my front, then revolved me holding my arm slightly. Then he raised my arm up and began to doing something at my side with those plates… then from behind and on the other side. Then he showed me to dress up. After this order I began to dress up and look around but there were neither windows nor lights visible. I couldn’t see anything.

They had something that might be food in the form of icicles. They were crumbling it into small chips and inserting them into their mouth. There were no crushing sounds. This food was crushing as hardened dough, without any sounds. He (the entity) pointed with his finger on the thing in an icicle shape and asked me – not by words but gesticulating – could I eat it. They wanted to treat me with it. But it was somewhat strange for me and I showed with my head move that I wouldn’t eat that thing. Then he showed me to dress up so I did it and I was about to went off the craft as the being said. When I was about to do it, I turned back and took my cap off saying to them: “Goodbye”. All of them took a bow. Then I took a step ahead and found myself on the ground. And that’s all. I could only observe the craft only in a distance of 15 m. because it then hid behind some bushes. I was in hurry to reach home and inform my sons about the incident. 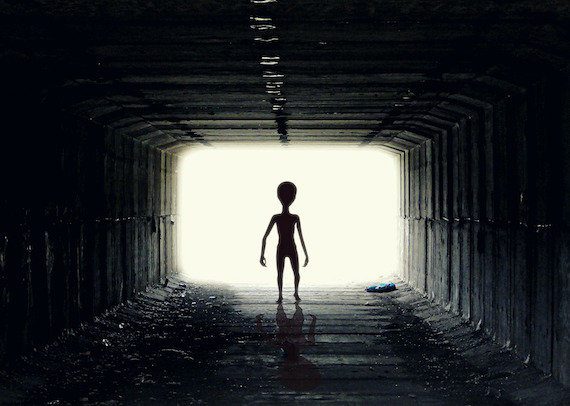 When Wolski got home, he told his wife and sons about what had happened and had them go outside and see if they could see the craft as well. When they went out to where the incident had taken place, they would not only see it for themselves, but also find physical signs left behind by the craft and its occupants, of which Wolski would say:

Then I ran outside and saw my sons coming from the barn side. I called them saying: “Go quickly on the field and you will see some craft in the air”. I even described it as a “car” in the air, something out of ordinary. So they ran to alarm one and another neighbor and then together rushed toward the field. My third son appeared afterwards and I said to him: “You also should go and see it”. After a while I joined to them because of curiosity. But when I arrived at the spot along with my sons there were nothing in the air – only grass trodden down covered with dew and paths coming in all directions… When I saw that it disappeared I turned back and returned home. The rest remained at the site checking the footprints etc. Soon two other men joined them. They were inspecting the prints, saw some foot… [As it turned out, the area was full of strange footprints. There were also clues indicating that soil samples might be taken. The footprints were nearly rectangular in shape although soon they were trodden down by local inhabitants and law enforcement officers.

When it got out into the wild the story became a sensation in Poland, and quickly rocketed to its most famous UFO case ever, putting Wolski in the limelight. It was something the normally quiet and reserved farmer did not at all appreciate, but he nevertheless stood by his story and insisted it was all true. A psychologist who examined Wolski declared him to be an honest man of sound mind, and according to friends and family he was a no-nonsense, reliable, honest and hardworking man with no reason to make up tall tales, and he adamantly stuck by his story even as he was ridiculed and constantly harassed by curiosity seekers. He would say of his ordeal:

Do you know what people then talked about me? They called me an alcoholic or said that it was a mere dream! The worst although were the trips that began coming here. Sometimes there were up to 14 coaches with tourist at once. They harassed me and didn’t let to work. And trampled my meadow…

Wolski would die in 1990, but his case still remains popular among ufologists in Poland, although it is not very well-known abroad. In his home country his legacy has carried on, with a monument to the event erected in his home town of Emilcin. What are we to make of his fantastical story? Did this really happen in any sense at all or are these just the ravings of a delusional mind or a hoax? The answers remain unclear, and it is a case from a far corner of the world that dwells outside of the more famous cases reported from the United States.

A "1, 2, 3" of Some of the World's Wildest Conspiracies: JFK, UFOs and Horrific Holograms