From Taxi Driver to UFO Cult Leader: The Strange Tale of George King

In modern times, various cults and religions revolving around strange entities, aliens, and UFOs seem to be a dime a dozen. There have been all manner of such organizations ranging from the merely odd, to the outright dangerous, and everything in between. Such belief systems seem to sprout up out of nowhere, but their stories are almost always intriguing at the very least, and here we will look at one such organization that had its humble roots in a simple taxi driver.

Born in 1919, in Wellington, Shropshire, England, the man known as George King did not have a childhood that seems as if it would create the founder of a famous UFO cult, religion, or whatever you want to call it. He grew up in a deeply religious Protestant family and he himself was Protestant well into adulthood, but at some point he became increasingly drawn to the occult, spiritual healing, and various theosophically-based metaphysical practices. Then one day he would be fully immersed in the world of the weird. In 1954, King was working as a simple taxi driver in London. At the time he had a rather mundane life and was an unassuming man who history could have very well easily forgotten about, but during a routine drive he was allegedly suddenly hit with a telepathic communication from an extraterrestrial intelligence named Master Aetherius, from the planet Venus, which allegedly said to him, “Prepare yourself! You are to become the voice of Interplanetary Parliament.” 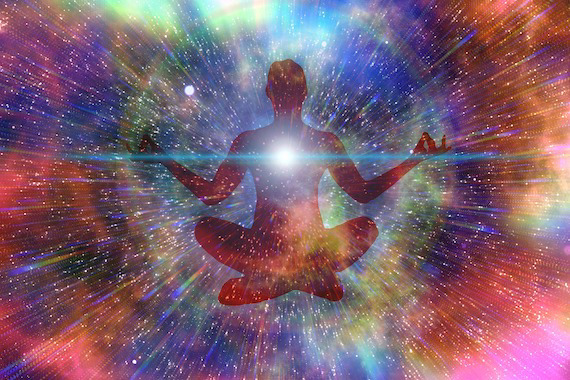 King claimed that he was soon having regular telepathic communications with what he called “Cosmic Masters” from Venus and other planets, as well as developing various psychic powers. In 1955, he would found the Aetherius Society, a religious group that claims to be “dedicated to spreading, and acting upon, the teachings of advanced extraterrestrial intelligences,” and open a headquarters in London. Calling himself the “Primary Terrestrial Mental Channel,” King claimed that these extraterrestrial intelligences were highly evolved spiritual beings on another dimensional plane, and were giving him various secrets of the universe and wanted to help humanity solve its current earthly problems and advance into some sort of coming New Age. According to him, these Cosmic Masters traveled the universe in flying saucers and often took human form to walk amongst us and try to guide us, and some of these aliens were claimed to be Buddha, Sri Krishna, Lao Tzu, Confucius and Jesus. The main goal of the group was to help these entities and carry out various “Cosmic Missions” on their behalf in order to prevent worldly destruction by improving cooperation between humanity and various alien masters that exist on a complex spiritual hierarchy, including extraterrestrials from Venus, Mars, and Saturn, to spread a message to aid humanity, using "spiritual energy" to improve the spiritual calibre of the world. They also believe that they are to prepare the way for the "Next Master," a powerful messianic figure who will descend upon Earth at an undetermined time in a flying saucer and wield vast magical powers, and that his appearance will depend on the advancement of humans and the balance of karma.

The group has a wide range of interconnected beliefs and practices towards this end, and mostly comes across as a hodgepodge of UFO claims, alien, yoga, spiritual healing, psychic powers, New Age beliefs, occultism, and ideas and practices from various world religions including Hinduism, Buddhism, and Christianity, often using a combination of Christian prayers and Eastern mantras. Indeed, they believe that many of the great religious figures from the major world religions are all in fact the same thing, which is earthly manifestations of the extraterrestrial greater Cosmic Masters, and that “all great religions are simply different expressions of the one essential timeless reality that is the Divine Source.” A big part of their beliefs is channeling spiritual energy from these Cosmic Masters, such as holding what they call “Operation Prayer Power,” which is a weekly ritual where members charge a “spiritual energy battery” with “prayer energy for an indefinite period” that they believe can be used to avert various disasters and catastrophes when needed. Indeed, the society claims that they have stopped many wars and natural disasters using this spiritual energy. Another way to accumulate this spiritual energy is to pull energy from the earth and direct it into a spaceship in orbit shielded from telescopes and radar, which they call “Satellite Number Three.”

Another belief is that Mother Earth is a living goddess. One of the missions of the Cosmic Masters is said to be to protect the deity Earth, and they believe that the Masters have fought off evil alien invaders from other parts of the universe on many occasions over the millennia who have looked to harm her. This mother Earth is guided by the Masters, and one of the organization’s bishops, Brian Keneipp, has said of all of this:

The biggest reason why the Aetherius Society is here, why the Cosmic Masters came to earth, is because the Mother Earth has to change. She’d held herself back for hundreds of thousands of years because she’s providing mankind a home to evolve. She’s been told by the karmic lords that she can no longer hold herself back. And so the big push by the Cosmic Masters is to raise as many people up so that they will be able to get to a point where they will enter a new age here on earth.

With regard to UFOs, the society believes that these cosmic beings exist on a “spiritual level” by maintaining a “higher vibratory rate” which can be made lower or higher, resulting in the reported blinking in and out of UFOs, and that these ships are capable of interstellar and interdimensional travel. Another core concept is that human beings are reincarnated after death, and are working towards one day becoming Cosmic Masters themselves. Indeed, they believe that there are various stages of spiritual evolution from earthly to cosmic developed through lifetimes, all leading to higher and higher dimensions. If one is to deviate from the “Divine Law” and choose a bad path, they are said to be reincarnated on another planet, where they will continue to evolve as the rest of Earth moves on into a new age of peace and enlightenment. The society claims that none of this is a secret to Earth’s governments, and that the Cosmic Masters have already made contact, but that a sinister organization known as “The Silence Group” are tasked with suppressing the truth and misleading the people, using misinformation, fear and ignorance to control humanity.

As wild as this all sounds, King’s Aetherius Society was very popular, to the point that in 1959 he opened a Los Angeles chapter of his organization to expand his operations. During this time, he actively promoted his group, appearing on television shows where he would sometimes channel Aetherius, who would supposedly speak through him for the benefit of audiences watching. He also made all sorts of incredible claims, such as that he had vast psychic powers and could speak "all terrestrial languages," as well as claiming various titles, awards, diplomas, degrees, honors, and even a Knighthood. His followers would vouch for him on this, and called him “an author, inventor, metaphysician, occultist, prophet, psychic, spiritual healer, spiritual leader, teacher, yogi and Aquarian master.” This all helped to make the society grow to the point that by the time King died in 1997 there were chapters in 11 countries across the world, and his followers would regard him as an Avatar and Cosmic Master.

Of course there has been much criticism aimed at King, much of it revolving around his bold claims about his qualifications. For instance, it has been found that his degrees are mostly from degree mills with no accreditation, and many of his other supposed titles and honors have been found to be unable to be verified, undocumented, from unrecognized organizations, are titles or honors anyone can apply for and get if they meet certain requirements, or are outright bogus. He also never provided any proof that he had psychic powers or could speak all of the world’s languages, and the main idea is that he was nothing more than a charismatic scam artist drawing in followers with a concoction of world religions and various New Age mumbo jumbo that sounds really cool and enticing for some, but is ultimately all a fairy tale. It has often been accused of being a cult, but journalist Jonathan Parks-Ramage, who has investigated the group, attended their practices, and has spoken to many of its members, says of this:

George King actually talks about the importance of discernment. What he means is you should determine what is right and wrong,” Rodney (a member) says. “And that’s what you’re talking about when you talk about Heaven’s Gate, and the teachers who said, ‘Put on these black sneakers, we’re all gonna die and jump on a comet.’ Don’t be a fool. Discriminate and look into any kind of an organization or activity that you involve yourself in. Study it, investigate it. Is it right or wrong?” In that respect, the Aetherius Society doesn’t seem like a cult. Yes, it is a new religious movement formed by a charismatic leader, with an idiosyncratic belief system. But its goal is one shared by many religions: “reducing suffering in the world.” While the Society’s methods for achieving this (such as charging a battery with prayer) may be scientifically dubious, the intention is genuine. In the end, I’m rather shocked to discover that the Aetherius Society doesn’t shock me at all.

Indeed, despite all of their wild ideas, practices, and beliefs, and despite all of the criticism and skepticism aimed at them, the Aetherius Society has mostly been seen as relatively harmless and non-controversial. They don’t force their members to pay exorbitant fees or to stay if they don’t want to. There are no behavioral requirements such as bans against alcohol, cigarettes, drugs, or sex. They have not made any end of the world pronouncements or acted in any dangerous way whatsoever. It all seems pretty bizarre but ultimately innocuous. They seem to be just a group of people gathering around charging their spiritual battery, looking for UFOs aliens, drinking and hanging around with Cosmic Masters, and talking about how to make the world a better place. It all sounds…. pretty fun, actually? As absurd as it all may seem, they are luckily not considered a threat as far as these things go, and it is all pretty impressive that they are still going strong right up to the present. Not bad for a guy who started out driving a taxi.

The Mysterious Death of the Original Superman