Octopuses may have huge brains, but that doesn’t mean they use them wisely -- for the first time, researchers captured video footage of these cephalopods collecting shells and clumps of sand with their arms, then using their jets to fire the objects at each other in a strange behavior that could be a way to keep other octopuses away from them or their territories. Or are they using those giant brains to prepare an armed invasion of the surface creatures who are polluting their world?

Another TikTok time traveller – this one claims to be from the year 3000 – claims the US Navy will make contact with extraterrestrials “from the ocean” this month and "Kansas will be hit with an F5 tornado killing hundreds of people" in February 2023. Traveling back in time 1000 years to warn people about a tornado is like going back to Hastings in 1066 to tell the English army their shoes are untied.

A mysterious “large Labrador sized black cat” has been seen so many times over the past two decades prowling the streets of High Wycombe in Buckinghamshire in South East England that the alien big cat has acquired the name Beast of Bucks – the latest sighting of the possible puma was near Cokes Lane in Amersham. The former Beast of Bucks no longer holds the title after losing so much money in his purchase of Twitter.

A video uploaded by someone in Kern County, California, allegedly shows a Bigfoot walking near an electrical tower – it is walking upright and some suggest it was attracted by buzzing and crackling noises that can be heard from the energy being discharged and was either absorbing the energy or inspecting our technology. If Bigfoot wants to steal our technology, maybe it should start with electric razors and sewing machines.

A French startup called Neoplants claims it has genetically engineered a pothos (Epipremnum aureum) plant and its associated root microbiome to create a high-tech houseplant which can do  the work of up to 30 air purifiers by absorbing volatile organic compounds from paints, cleaning supplies, building materials, and pesticides that cause headaches, eye and throat irritation, and even liver damage or cancer. Get ready for one to star in a new horror musical: “Little Shop of Filters.”

The University of St. Andrews in Scotland has set up a new SETI Detection Hub, the cross-disciplinary organization that will develop a set of alien-contact protocols for the entire world to follow in the event of a sudden encounter with an extraterrestrial or the reception of an alien message – it will create impact assessments; deliver reports that outline the implications of specific policies; and develop protocols and treatises for responding to hypothetical alien messengers. Who is going to help the aliens understand Scottish brogue?

In yet another photo from the past showing technology of the future, a photo from Elvis Presley’s last concert in 1977 has some people convinced a person in the audience is holding a mobile phone in the air and recording the King as he moves around the stage. If the crowd around this person noticed what they were doing, why don’t they and Elvis look all shook up?

For over 10,000 years, a small population of pupfish has lived nowhere else by underground in Nevada's Devils Hole in Death Valley National Park and biologists at the University of California, Berkeley, who recently sequenced their genome found that the fish have interbred so much that the average individual shares about 58 percent of its genome with its family members and will probably inbreed themselves into extinction. Maybe they can scare the fish by showing them episodes of “The Crown.”

A man who developed paralysis and lost his ability to speak following a stroke can now communicate using a system that translates his brain's electrical signals into individual letters – he thinks of the letters using the NATO phonetic alphabet ("alpha" is A, "bravo" is B, etc.) and is ale to produce sentences from a vocabulary of more than 1,150 words at a speed of 29.4 characters per minute, or about seven words per minute. The first new innovation he wants is the ability to swear at the spell-checker.

NASA’s Hubble Space Telescope captured the moment a star exploded in a supernova more than 11 billion years ago, when the universe was less than a fifth of its current age of 13.8 billion years – the image of the red giant that was over 500 times larger than the Sun actually showed three views of the supernova due to gravitational lensing. No, you can’t use gravitational lensing as an excuse why you look three times as big as last year’s birthday photo.

In what could be the closest call ever, a man in Nevada County, California, recently heard something hit his home and start a fire which eventually destroyed the house and killed one of his dogs – witnesses say it was a meteorite which looked like a flaming basketball falling from the sky during the Southern Taurids meteor showers. In the southern hemisphere, these are called flaming footballs.

Marine biologists studying the waters off the Naples Point, just up the coast from UC Santa Barbara, discovered some living small translucent clams that were only known from fossils – meaning the Cymatioa cooki clam has managed to survive undetected for millions of years. It will probably try to hide for another million years once it finds out about clambakes.

A study published in the journal ACS Chemical Neuroscience reveals that the hops which give many varieties of beer their bitter flavor are also capable of preventing harmful proteins from clumping together in the brain and causing Alzheimer’s disease – the researchers at the Italian Ministry of University and Research (MUR) warn that the study only used worms, and this is not a medical excuse for a pub crawl. Do you really need a medical excuse for a pub crawl?

Ameca, the world's most advanced' humanoid robot with the most realistic facial expressions, said in a YouTube Q&A that she has seen her 'prototype legs in the lab' and may be walking around on them within a year. Running, jumping and kicking butt will take more time.

Everyone has played some form of ‘Piggy in the Middle’ (a game where two children toss a ball with a third in the middle trying to intercept it) and now that list includes actual pigs – scientists from the University of Torino in Italy studied how a group of 104 pigs resolved conflict after fighting and found that a bystander pig often got in the middle of them, reduced the tension and often stopped the fight. This is why pig fighting will never be a popular sport on pay-per-view.

A woman in Embu, Kenya, reported to the police that two men had stolen one of her livestock, but when the cops were slow to respond, she called a local witch doctor who allegedly cast a spell that caused the men to show up at the police station covered with bees and returning the stolen cow – the bees allegedly left when the witch doctor removed the spell. More on this in the next episode of Law & Order: Special Voodoo Unit.

During the same week, the skies over Norway showed a  dazzling display of extremely rare pink auroras caused by a solar storm that tore holes in the earth's magnetic field, while witnesses in Sweden saw a mysterious blue ribbon of light in the skies over Abisko, a small village in the heart of Swedish Lapland, which was not natural but possibly caused by a Russian submarine testing ICBMs (Intercontinental ballistic missiles) in the White Sea. Let’s hope this doesn’t become the next big thing in gender reveal parties.

Researchers studying tattoos on human remains and tattooed figurines found at the ancient Egyptian New Kingdom site of Deir el-Medina (1550 BCE to 1070 BCE) discovered that the tattoos are connected with the ancient Egyptian god Bes, who protected women and children, especially during childbirth, and as a post-partum ritual to protect them later in life. Were these the first tattoos or the first insurance policies?

The US National Park Service has found it necessary to issue a formal statement warning hikers not to lick the Sonoran desert toad (Bufo alvarius), also known as the Colorado river toad, because although it secretes a powerful hallucinogenic known as 5-MeO-DMT, that substance is a potent toxin that can you extremely sick -- the secretions are considered strong enough to kill an adult dog if the toad is threatened. Based on past experience in telling people not to do something, wouldn’t it be more effective to tell them licking toads is actually healthy and it tastes like broccoli?

The U.S. military's secret X-37B robotic space plane just passed 900 days in orbit, extending its flight duration record but still not revealing what kinds of clandestine projects it is carrying nor when its mission will finally end. It will be pretty disappointing if its mission was merely to test our attention span.

Top Secret and Underground Facilities: There's Way More Than Just Area 51 and the Legendary Dulce Base 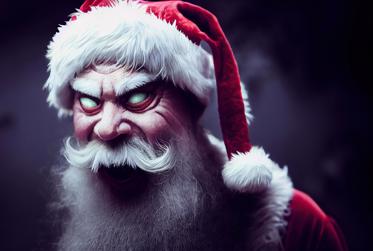