The 2023 Predictions From Baba Vanga and Nostradamus are Here - Be Forewarned!

The end of the year 2022 is fast approaching, which means it is time for the 2023 predictions of those famous dueling dead psychics – Baba Vanga and Nostradamus. And even though there are still a few weeks left to change the course of history, this is also a good time to see how the two of the most famous seers of all time did in their prognostications for 2022. Let’s start with the recap first … that will give you time to sit down, take a deep breath and brace yourself for what Baba Vanga and Nostradamus are warning is ahead for us in the new year.

“A team of researchers will discover a lethal virus in Siberia that was, up until now, frozen. Due to the catastrophic effects of global warming, said virus will be released and could quickly spin out of control…”

Vangeliya Pandeva Gushterova, better known as Baba Vanga lived in Bulgaria from 1911 to 1996, and lives on to the present day in her predictions on major world events. Not one to dabble in World Cup winners, Baa occasionally forecast royal events as she amassed a sizeable collection of somewhat vague and often cryptic prognostications that nonetheless were deemed to be right or close to correct by those who follow and interpret them. While that hasn’t yet been the case for her 2022 prediction about a lethal virus from Siberia, she was said to be correct about “Intense bouts of floods (in Bangladesh, India, Thailand and Australia)” and “water shortages in several countries and major cities.” While events like those generally happen frequently and in those specific countries, ‘close’ counts in horseshoes, hand grenades and psychic predictions, so Baba Vanga is being credited for two right out of six for 2022, with three weeks left to still be right on this one: “Alien ships will attack Earth and they will bomb cities and take people captive.”

What does Baba Vanga see for humanity in 2023? Here are five predictions, courtesy of MSN.com

A solar storm will strike Earth in 2023 on a scale the world has never before seen. This prediction is certainly possible, and even a minor one could still knock out electrical and power grids that would bring communications and commerce to a standstill.

A "big country" will carry out bioweapons research on people, resulting in the death of thousands of them. This sounds pretty scary and completely plausible with the war in Ukraine, the volatile political climates in Iran and other countries, and the protests raging in China over mass COVID shutdowns – any of these could be linked to bioweapons research and the accidental or intentional mass deaths of thousands.

Humans will grow babies to full term in laboratories in order to allow parents to choose skin color and other characteristics of their offspring. Chinese scientists have already edited the genomes of human embryos and created the first human genetically edited babies, so this is well on its way to happening in that country.

Aliens will visit Earth, the world could find itself "covered in darkness" and millions will die as a result. There is that “mass death” prediction again for 2023 – Baba Vanga doesn’t have much good to say about our upcoming year. If it is any consolation, she also predicted an alien arrival in 2022 and that hasn’t happened yet, but her forecast for 2022 did not predict that “millions will die.”

Will we survive to look back on 2023 and list the predictions of Baba Vanga that didn’t happen or were not as severe as she forecast? Let’s hope so. In the meantime, here’s a look at what Nostradamus saw happening in 2022. 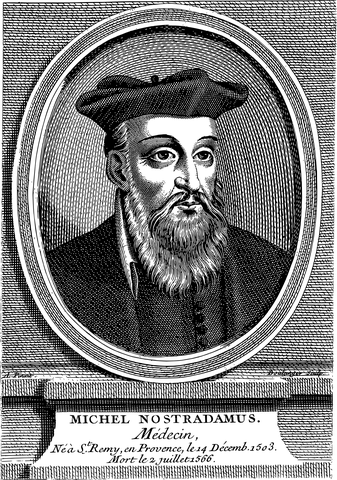 “Twice put down, the East will also weaken the West.

It’s adversary after several battles chased by sea will fail at time of need.”

That first prediction of a world war fought at sea hasn’t happened yet, and the “sudden death” in the second was not Queen Elizabeth II but thought to be North Korea’s Kim-Jong Un, although Russia’s Vladimir Putin is said by some to be dying of cancer … there are still three weeks to go for him to go. The quatrains of Michel de Nostradame’s prophecies were published in 1555 and must be interpreted, but many interpreters believe he correctly predicted the Great Fire of London, the French Revolution, the rise of Adolf Hitler, the assassination of JFK, the moon landing and 9/11. Looking past his misses in 2022, the Santa Barbara News-Press unveiled his predictions for 2023.

Twenty-seven years the war will last.

The unbelievers are dead, captive, exiled.

If you thought Baba Vanga’s prophecies were depressing, Nostradamus’ are downright apocalyptic. This quatrain is interpreted to predict a 27-year world war between Russia and the U.S. and its allies as a result of the conflict in Ukraine. That war may quickly bring about Nostradamus’ second prediction for 2023 – Britain’s entry into the war.

“Within the isles is a very horrible uproar. One will hear only a party of war.”

Nostradamus is warning about a 9.8 quake in the Pacific Ocean which will release giant spiders and locusts – those are probably symbolic of something worse. He also predicts a meteorite the size of a whale will bring an alien species to Earth – perhaps this is Baba Vanga’s mass deaths as the result of aliens. He also projects that U.S. President Joe Biden will suffer from a mystery disease – that would not be a surprise based on his age. On the climate change front, he sees costs of scarce foods so high that “the bushel of wheat rise that man will be eating his fellow man.” However, the scariest (and possibly strangest) prediction goes back to Putin, Russia and the problem the country has in recruiting new soldiers to fight the war.

A monkey of fortune with twisted tongue

will come to the sanctuary of the gods.

He will open the door to heretics

And raise up the Church militant.

This is interpreted to mean that a long-running rumor that Russia is working on human-monkey hybrids will come true in 2023 – a military chimera that will feed on anything, fight like animals and not result in the same sorrow and guilt back home when they die.

There you go – the predictions of Baba Vanga and Nostradamus for 2023. Don’t you wish they’d stick to World Cup winners?