The sea has long held many stories of unexplained vanishings. It perhaps makes sense, as this is a wild place full of unpredictable weather and currents, a place that seems to sometimes be almost hungry in a sense, maybe even a place where we don't really belong. There have been many cases throughout history of people sailing off towards the horizon to keep on sailing off the face of the earth, and one of these is when a professional, seasoned sailor went out for a leisurely jaunt only to never return and become a persistent unsolved mystery.

Born in Boston in 1985 and raised in Scituate, Massachusetts, the American sailor Trevor Oakley Moore from an early age had an affinity for being on the water, taking up sailing at the tender age of 7 shortly after moving to Biscayne Bay, in Florida. He spent all of his time in his youth at the sea, and in adulthood he would go on to become a world renowned competitive sailor, winning numerous competitions. Among his many accolades were being a three-time Intercollegiate Sailing Association (ICSA) All-American, in 2005, 2006, and 2007, the winner of B Division for low-point scoring in the 2005 Nationals, a runner-up 2nd-place finish in 2006 at the ICSA Singlehanded Men's National Championship, and runner-up 2nd-place finish at the ICSA National Championship Fleet Race in the A Division in 2007. He was also named ICSA College Sailor of the Year in 2007 and helped Hobart and William Smith Colleges sailing team win the Inter-Collegiate Sailing Association National Championships in both Coed Fleet Racing and Team Racing in 2005, and on top of all of this he had a pilot’s license as well. He was perhaps best known for playing a key role on the 2012 U.S. Olympic sailing team, where he finished 15th in the skiff event.

Moore was known for having an almost uncanny ability to read wind patterns and ripples in the water, and was seemingly always two or three steps ahead of everybody else on the different tacks and wind shifts during competitions. He was a natural, and his magnetic, charming personality made him beloved among his teammates and those he coached. His future in the sport looked very bright, indeed, and in June of 2015 he was in the process of preparing to compete in the 2016 Olympics. At the time he was just 30 years old, happy, looking forward to competing and his upcoming marriage to fiancé Libby Patton, with his whole life ahead of him, but things were about to take a dark turn into a perplexing unsolved mystery.

On June 14, 2015, he and Patton had dinner with friends after he had just returned from coaching young sailors in the Virgin Islands. That night he was described as being his usual friendly and outgoing self, with no signs of anything amiss at all. The following day, he was up early, spray painted his bike, attended to some house projects, and told Patton he was going to go out on his 16-foot inflatable powerboat for a little while. There was nothing odd or unusual about this at all, as Moore often went out on the water alone, so when Patton left their home in Coconut Grove, Florida to go to a volunteer shift at a local animal shelter she thought nothing of it. When Moore went down to the water it was a clear, calm day, with no rain or rough weather forecast, and so when the very experienced sailor headed out over the water there would have been no reason to suspect that this was the last time anyone would ever see him.

At 5 p.m. that day, just a few hours after Moore had headed out, his boat was found tangled in some moorings near Dinner Key Marina, less than a half-mile from his departure point. The boat was still in gear, the engine still running, there were no signs of a struggle or any damage, and inside were his life jacket and other belongings, but there was no sign of Moore himself. Various calls were made to Moore’s phone, but there was no answer, and at this point it was feared that something terrible had happened to him out there on the water. As authorities investigated, they began to turn up some strange clues. GPS data showed that Moore’s boat had left the U.S. Sailing Club and headed south, traveling between 12 and 15 knots, after which it had gone to a place called Soldier Key, about 11 miles away, where things would get rather odd. After reaching Soldier Key, the boat had made a sharp U-turn, its speed slowed to around two knots, and it took a meandering, zigzagging course back to Coconut Grove, arriving at almost the exact same spot from where it had left, and sometime during this Moore had simply vanished off the face of the earth. It was very strange, indeed, and Officer Lorenzo Veloz, a spokesman for Florida Fish and Wildlife, would say of the odd GPS data:

The chances of that are between none and never. Think about it: How can you be miles in the ocean and the boat takes a sharp turn and somehow ends up all the way back at the same point? The odds of that happening — you’ll never do that. The wind, the current, the tide, the other vessels in the area moving the water around. It’s just very weird. 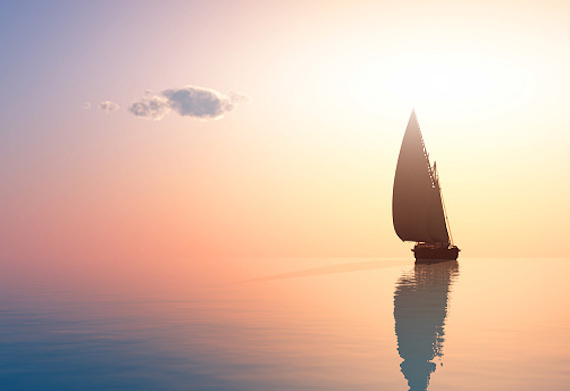 Authorities immediately created a grid surrounding the boat’s route, and the Coast Guard, along with the Florida Fish and Wildlife Conservation Commission, City of Miami Police Department, and the National Park Service, launched a massive search that would span more than 510 nautical miles using all the resources they had at their disposal, but there was no trace of the missing sailor. For three days they scoured the entire area and retraced Moore’s path, but with absolutely no sign of him the search was eventually called off, much to the sadness of his family, colleagues, and friends.

In the meantime, speculation swirled on what could have possibly happened to him. Moore was 6 feet 2, 185 pounds, young, athletic and resourceful, a top athlete in prime shape, he knew the water and bay intimately, it had been a clear day, so how could he just vanish like that? An onboard medical emergency seemed unlikely because he was so young and healthy, and even if he had somehow fallen off the boat without his life jacket he was a very strong swimmer and conditions were clear. It was not even really considered that he had intentionally disappeared or killed himself because he had shown no indications of being anything other than his usual cheerful self and had been hard at work planning his wedding to Patton. What could have possibly happened to him out there to make him disappear so completely? No one really knows, and Scott Ikle, Moore’s college sailing coach, has said of the strange conundrum:

The more time you spend around the water, you learn to love and respect the powers of the ocean. I think for all of us, something happened, and we’ll never know what. Everybody will always wonder, but I think people — watermen, sailors — respect the ocean because you know it gives you such a great joy. At the same time, it can take things away from you. It took Trevor.

Although his body was never found and his family has always held out hope that he is still alive somewhere, Moore was officially deemed to be deceased, with his family holding a memorial service and a headstone erected at a local cemetery. We are left with many questions and few answers. What happened to Moore? How could a fit, healthy, professional sailor so completely go missing under ideal sea conditions? What is the meaning of his final erratic course? Was this a suicide, an intentional disappearance, foul play, or what? Only Moore and perhaps the sea know the answers.

Mystery, Intrigue, and the Bizarre Death of a Woman from Nowhere