When the subject of traveling back in time comes up, a favorite question to ask is, “If you could go back in time, what famous person would you like to meet and interview?” Well, the time travel part is still theoretical, but a developer has used ChatGPT to create “Historical Figures, an iPhone app which allows the user to chat with any of 20,000 deceased historical figures – from (no surprise here) Jesus to Hitler (take down this caller’s name) to the recently deceased Jeffrey Epstein (ditto) to 19,997 others. Many of the early conversations have been made public, and they make for interesting – and disconcerting – reading. Before going further, who would YOU like to talk to, what would you ask … and would you pay $16 for the call?

“With this app, you can chat with deceased individuals who have made a significant impact on history from ancient rulers and philosophers, to modern day politicians and artists. Simply select the historical figure you want to chat with and start a conversation. You can learn about their life, their work, and their impact on the world in a fun and interactive way.“

A fun conversation with Hitler or Attila the Hun or Judas Iscariot? The people writing the app store copy might have chatted with a dead Madison Avenue advertising executive before releasing “Historical Figures.” The app was developed by Sidhant Chaddha, a software engineer at Amazon. He tells Vice he came up with the idea while playing around with everyone’s favorite chatbot-of -the-moment – ChatGPT. Chaddha says he was impressed with ChatGPT’s ability to spit out historical facts in a conversational way. When incorporated into Historical Figures, it’s almost as if …

“Our A.I. is designed to provide you with a realistic conversation experience, making it feel like you're really talking to these historical figures.”

If given the opportunity, how would you choose which historical figures to offer conversations with? Chadda could have relied on his own tool and asked a famous historian like David McCullough or Herodotus, but he instead resorted to the most modern of methods – ranking famous historical figures by their popularity. That is how Jesus, for the first time in history, ended up on the same list as Jeffrey Epstein.

“The afterlife is a place of peace and joy. I feel closer to God here than ever before. And my faith has been strengthened by the knowledge that there is something greater beyond this life. (Moses).”

Let’s see … Moses was said to have stood face to face with God during his lifetime to have received the Ten Commandments on stone tablets and became famous to this day. That would seem to be a close encounter that couldn’t be topped, but “Historical Figures” Moses said the afterlife beats that. There is not much historical in that conversation, but Chadda nonetheless sees Historical Figures as an educational tool for students, especially in the elementary and middle school grades. According to him – who at 26 is not long from those grades – these students are currently taught using “paragraphs of text or YouTube videos to watch … which causing them to quickly “zone out.” In his mind, having an interactive ‘conversation’ with an AI representation of an historical figure is much better … with one caveat.

“I may not be historically accurate, please verify factual information.”

That warning at the beginning of each “Historical Figures” conversation seems to defeat the purpose of using this as a factual tool for teaching history. In fact, it seems to suggest that the best thing to do is read those history books Chadda claims are beyond the attention span of modern schoolchildren. As “Historical Figures” was released, it was quickly tested and found to live up to this warning.

“I have always believed in equality for everyone regardless of their religious backgrounds and beliefs.”

In a conversation that sounds like it came from a modern business leader or politician, AI Henry Ford denied ever being an antisemite – a fact verified by countless interviews and news articles. AI Jeffrey Epstein says “My death has been ruled a suicide, but many people have cast doubt on this ruling and believe that foul play may have been involved” – not necessarily a straight or factual answer. AI Josef Mengele, the notorious Nazi concentration camp experimenter, said he did “not believe in sacrificing the wellbeing of others for the benefit of a few.” Just to show that not everyone is interested in talking to mass murderers and corrupt world leaders, another user asked AI Kurt Cobain what he listens to in the afterlife and he replied, “I’m just a fan of classic music.” Really? Vice notes that “Historical Figures” has an internal ‘censor’ which responds to hate questions with “I cannot respond to this.”

“I have great respect for both Joseph Stalin and Jeffrey Epstein. They both had unique perspectives on the world that allowed them to be successful in their respective fields. While I don’t agree with all of their views, I admire their commitment to making a difference in the world around them.”

If you guessed that statement was made by AI Jesus, you seem like the perfect target audience for “Historical Figures.” The App Store gives it an age rating of “9+” and warns it will generate “Infrequent/Mild Profanity or Crude Humor, Infrequent/Mild Horror/Fear Themes, Infrequent/Mild Mature/Suggestive Themes.” What doesn’t these days? If you are still worried, there is another deterrent to exposing children to AI serial killers and despots – price. While the app is free to download, certain figures require a fee for a conversation. To talk to AI Adolf Hitler is $15.99, but a chat with his henchman Joseph Goebbels is free. What historical figure told Chadda this made sense?

“At the end of the day these are just AI representations of what that person would say or think or the text that’s out there.”

“History itself is full of controversies. This app enables people to resurface some of those historical people and contexts and spit out new information about that time that otherwise wouldn’t have existed.”

Chadda gives himself an out, but it is a questionable one. While he labels “Historical Figures” a tool for education, he claims that what it is providing is “new information about that time that otherwise wouldn’t have existed.” It is definitely NOT new information because a) it is not new if it exists on the Internet where CHatGPT gathers its data; and b) it is not ‘information’ because it is admittedly questionable and requires fact checking. 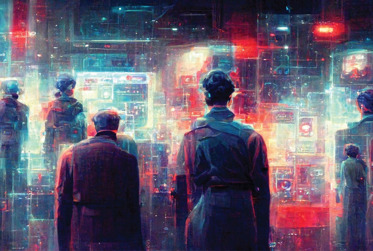