One of the rock stars of the cryptid world is certainly the Loch Ness Monster of Scotland's Loch Ness. Even people with no interest at all in cryptozoology know this creature, and the legend has only grown over the years to reach epic proportions. Amid all of the myriad accounts out there some are more spectacular than most, and one of these must certainly be the time the creature was supposedly captured through using some sort of sex bait. Let's take a look.

On Friday March 31, 1972, an eight-member team of scientists from Yorkshire's Flamingo Park Zoo was having breakfast in the dining room of the Foyers House hotel, on the shore of Loch Ness, where they had been staying during one of their searches for the famed monster. The team was actively investigating the claims of something large living in the depths of the loch on a joint mission with the Loch Ness Phenomena Bureau, and were excited to try and test out a new weapon they claimed to have found in the search. On this occasion, the team had brought a potent “hormone sex-bait” that they claimed to have developed and which they were sure would be irresistible to the creature. On this morning, they had set their bait out just before breakfast, and although they were confident in the effectiveness of their sex-bait, none of them perhaps was anticipating things to get as weird as they were about to become.

Not long at all after the team had set out their bait and sat down to eat, there was an anonymous call to the manager of the hotel claiming that they were in the midst of having a monster sighting right there at the hotel. According to the caller, a "green and scaly creature” had floated up to from the depths and was cruising around just under the surface, and a "large hump" was also seen. As soon as the hotel manager heard this, he immediately rushed to inform the team of would-be monster hunters, and they immediately went outside to be greeted by the sight of a large, dark object out in the water about 300 yards offshore. 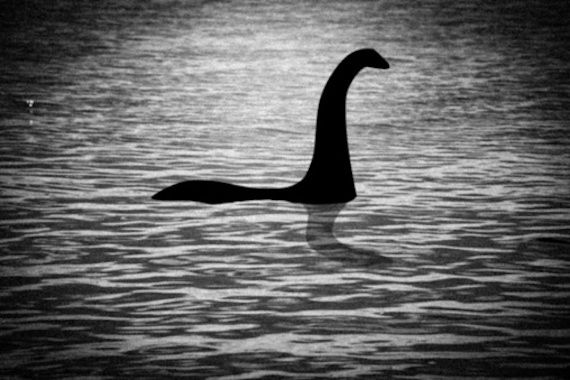 The team then excitedly got into their boat and headed out towards the mysterious object. Around 20 minutes later, the team returned to shore, only they were apparently not alone. Behind their boat, being dragged through the water was what appeared to be the body of the monster itself, which was described by witnesses as being 12 to 18 feet in length, perhaps one and a half tons, green in color, and looking like it was “half-bear and half-seal” or a cross between a walrus and a seal, with a bear-like head, flat ears, and large teeth. It did not take long at all for the sensational news to go global that the Loch Ness Monster had not only been found, but a carcass obtained, and reporters were tripping over themselves to get out to the Loch to check it out. When the journalists began rushing to the area, locals confirmed that a bizarre creature had indeed been pulled out of the lake, with some even claiming to have actually touched it. When a zoologist by the name of Don Robinson, of the Flamingo Park Zoo, was interviewed by reporters, he made a spectacular claim, saying:

With such a declaration from such a perceived trusted expert, monster mania went into high gear, with people flocking to the loch to try and get a look at the beast, and before long there were front-page headlines around the world calling the creature the "Son of Nessie." Disappointingly, none of the reporters were able to actually see the creature for themselves, as they were told that it had been loaded onto a truck to be transported to the Flamingo Park zoo to be studied. Unbeknownst to them, there was an obscure law at the time that forbade the removal of any strange or unidentifiable creatures from Loch Ness, no doubt to keep people from perhaps catching the monster and making off with the specimen. There was also a local uproar in that both residents and government officials alike did not appreciate English scientists taking away what the Scottish thought of as their own unique monster and piece of their national identity. As the truck sped off, police were called in and the next chapter of the bizarre saga would unfold. 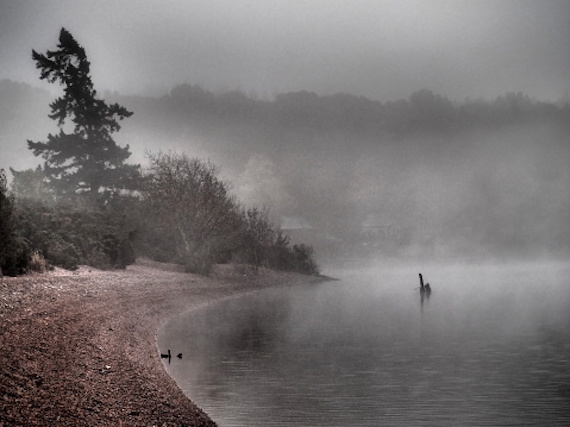 Police reportedly then chased down the transport truck with sirens blasting, after which the startled zoologists obediently pulled over and showed the police officers what they were carrying in the back. According to the report at the time, police confirmed that it was indeed a never-before-seen creature with reptilian green, scaly skin. They were told to take the monster to the nearest town, Dunfermline, where it could be examined by Scottish scientists on Scottish soil. Soon after this, Michael Rushton, general curator of the Edinburgh Zoo, arrived to examine the strange beast. The media went absolutely nuts waiting for the verdict, with the discovery dominating the news at the time.

Unfortunately, it would not be what everyone had been hoping for. Rushton did not take long at all to identify what the creature really was, and although it was certainly an odd discovery in the Loch, it was far from an unknown reptilian mystery beast. Instead, the carcass turned out to be that of a bull elephant seal. At the time it was still a weird thing to discover in the loch. After all, the elephant seal’s natural habitat was the South Atlantic Ocean, thousands of miles away from Scotland, so how did it get there? While at first it was suggested that it had somehow wandered out of its natural range to mysteriously make its way to Scotland, it was found to show signs of having been frozen for an extended period of time. Rushton would say of his examination:

It is a typical member of its species. It’s about 3 to 4 years old… I have never known them to come near Great Britain. Their natural habitat is the South Atlantic, Falkland Islands or South Georgia. I don’t know how long it’s been kept in a deep freeze but this has obviously been done by some human hand.

With the verdict out on the body of the “Loch Ness Monster,” the culprit behind the hoax finally stepped forward to admit what they had done. It turned out that the hoax had been perpetrated by a John Shields, one of the Flamingo Park Zoo’s educational officers, and that the elephant seal had been recently acquired during an expedition to the Falkland Islands. The seal had lived at the Dudley Zoo before dying shortly after. Shields had then seen an opportunity to play a practical joke on the team of Loch Ness researchers whose arrival at the Loch had been met with much fanfare. The elephant seal carcass had been slightly altered to make it look stranger, with its whiskers shaved off and stones stuffed within its cheeks, after which it had been put into the loch, with Shields himself being the one who had phoned the hotel with the sighting.

It should have been obvious what was going on with the timing of the report. The timing of the media frenzy that Shields knew would ensue was purposely planned to be April 1st, April Fool’s Day, although this had apparently gone over everyone’s head, with no one seeming to notice among all of the excitement and the serious, straightforward news accounts announcing that Nessie was real. Shields said that he had realized the joke had gone too far when the creature had been spirited away to be studied and a police chase had been involved, and he also expressed his surprise that its appearance had been so dramatically exaggerated by witnesses. The elephant seal was most certainly not covered in green scaly skin and was only around 9 feet long and 350-pounds rather than the 12 to 18 feet one-and-a-half-ton behemoth that was being widely reported. 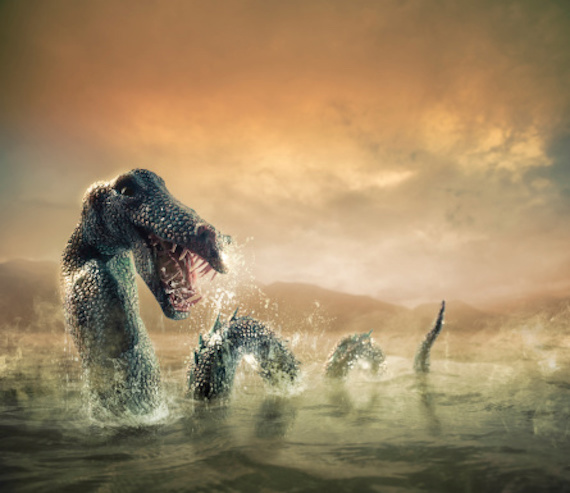 With the announcement that the whole thing had been merely an elaborate April Fool’s prank, the carcass was released back to the Flamingo Park Zoo, where it was displayed on ice for a time before being disposed of. Interestingly, at around the same time all of this was going on there had been another sensational report that had come in from a visiting high school teacher from Wisconsin by the name of Norman Slater, who claimed that he had encountered six enormous creatures in the water while out fishing, only he didn’t actually see them, but rather claimed that he had seen them through a powerful extrasensory vision as he passed over them. According to Slater, the creatures were each 70-90 feet in length, with large necks and slim, worm-like bodies, they were apparently just lying on the bottom. In addition to these mysterious beasts, he also said that he had seen a vast network of underwater tunnels leading out to sea. Slater was disappointed, because he claimed that no one believed him because of the fake Nessie body fiasco all over the news, not accepting that it might have had more to do with the fact that he was claiming to have sighted giant monsters on the bottom of the loch through ESP.

This is a case which is remarkable for the fact that before the whole fiasco had been outed as a hoax, eyewitnesses including local citizens, zoologists, and police officers, none of whom had been in on the hoax, had all given descriptions of a creature that bore very resemblance whatsoever to what it actually turned out to be. Did the sensational news and expectations cause them to exaggerate or outright fabricate their descriptions to more fit in to what they hoped the carcass to be? Were they somehow influenced by the media storm raging around them? Of course, an elephant seal would be a very unusual thing to find in Loch Ness, and might take some off guard, but it is interesting how warped and twisted perceptions and descriptions of the corpse became when it was dragged to shore and in the days leading up to the announcement that it was just a joke. It seems that expectations, excitement, and media sensationalism can in some cases all profoundly affect the way some eyewitnesses view a phenomenon .In the end, all a damn strange tale at any rate.