UFO and Alien Strangeness at England's Valley of Lights

There are places in this world to which strange forces and things beyond our understanding seem to gravitate towards. These are thos locations long steeped in stories of the bizarre, for whatever reasons pulling mysteries close to them. Such places have had all manner of legend and lore build up around them, and they remain lodged within the world of the weird. One such place lurks in the United Kingdom, which has drawn to it all manner of tales of UFOs and alien encounters.

Located in the Upper Calder Valley in Calderdale, West Yorkshire, England, is the serene and sleepy market town and civil parish called Todmorden. Situated at the confluence of three steep-sided Pennine valleys surrounded by moorlands, it is without a doubt a slice of rural England that one might conjure up when imagining such a place, and it has a sense of mystique and charm that sets it apart from the many other similar towns scattered throughout the region. Yet, behind its inviting ambiance and picturesque beauty, Todmorden and its surroundings also have a long history of strange phenomena, including ghosts, monsters, UFOs, and aliens, and have managed to become one of England’s most well-known hotspots of UFO activity.

While England itself has long been known as a hotspot for strange things in the sky, Yorkshire, and Todmorden in particular, ranks high. According to data Yorkshire is the UK’s second most prolific hotspot region for UFO activity, only second to London, to the point that it has sometimes been called “The Valley of Lights.” Among all of the myriad sightings, there have long been cases of alleged UFO related strangeness that particularly stand out. Perhaps the most famous such case from the area occurred on June 11, 1980, when the body of a Polish miner by the name of Zigmund Adamski was found perched atop a ten feet high coal pile twenty miles away from his home at J.W. Parker's coal yard in Todmorden. Although still wearing a suit, his shirt, watch and wallet were missing, and there were no visible injuries on the body except a strange mark – possibly a burn – on the back of his head. It would later be found that he had burns on his neck, shoulders and back of his head, all of which had been apparently treated with some sort of green ointment that was never identified. The official cause of death was determined to be a heart attack. Rather strangely, Adamski had last been seen five days before, yet despite having been missing for so long, the body had only one day’s worth of beard growth. This case was never solved, and the coroner, James Turnbull, described it as "one of the most puzzling cases I've come across in 25 years.”

Of course, considering the area’s reputation for UFOs, one of the theories that would pop up was that Adamski had been abducted by aliens, and although this might have been met with raised eyebrows there would be a case shortly after that would lend more credence to the idea. On November 29, 1980, six months after the discovery of Adamski’s body, a PC Alan Godfrey was coming off a shift when he saw “a diamond-shaped object hanging in the air, spinning slowly,” which measured about 20ft high and 14ft wide. He tried to radio for help but that the equipment would not work, and as he stared on in puzzlement, there was an intense, blinding flash of light, and he suddenly found himself driving in the opposite direction towards the police station. Oddly, his left boot was split and there was an itchy red mark on his foot. He would later describe being taken on board the spacecraft, where he was examined by “small beings and a tall man with a beard.” He would also describe how the road where his car had been was completely dry, despite the fact it had recently been raining heavily. He would also later claim that he was followed and harassed by a man in a dark suit and tie who introduced himself as “the Man from the Ministry.”

Interestingly, Godfrey had been one of the first on the scene when Adamski’s body was found, and he had said of it himself that the miner had possibly been abducted by aliens and placed on the coal pile "by someone or something." When the story got out, Godfrey was widely ridiculed, and it would lead to his losing his job, the disintegration of his marriage, and a spiral into depression and alcoholism, yet he would stick by his story, once saying as recently as 2014:

This was a nuts and bolts craft, not a trick of the mind. I have never seen anything like it. I would swear on the Bible it was from somewhere else. These things have been seen so many times above Todmorden, they call the area UFO alley. I wish I'd never seen the UFO, particularly because of the effects on my children. It's not easy having a policeman as a father but when he's a policeman who saw a UFO it's even worse.

It would only be in later years that he would somewhat walk back on it, saying it might have been a dream. Nevertheless, there are some who think there is more to it. Photographer Rik Moran, author of the book Chance Encounters of the Valley of the Lights, has spent years researching the Godfrey case, and has said of it:

The overall project took about five years on and off. I started my research by submitting a freedom of information request to the West Yorkshire police for more info. They sent over some press clippings (which I’d already seen) and then refused to give any more information, saying it was classified. This sparked my interest even more, and is in line with some of Godfrey’s claims that the police tried to cover up his sighting. I spent time in Todmorden both to research and shoot, I scoured microfiches in the library and spoke to locals about the story. I did further research at the British Library and went through UFO files in the National Archives. The latter was interesting as there was no mention of his encounter in there, despite him reporting it at the time. I also spoke to a lot of people from the UFO community who’d written books that featured his encounter and got some great material from them. I also found out lots of interesting things by speaking to locals. Godfrey’s son had an encounter earlier in the year to his Dad’s and I spoke to one of the other people who were there at the time with his son. I found a 1969 BFI film filmed in Todmorden that mirrored elements of Godfrey’s encounter, and there was the Polish miner found dead six months earlier on a coal pile with mysterious burns to the back of his neck – PC Alan Godfrey was the first one on the scene. 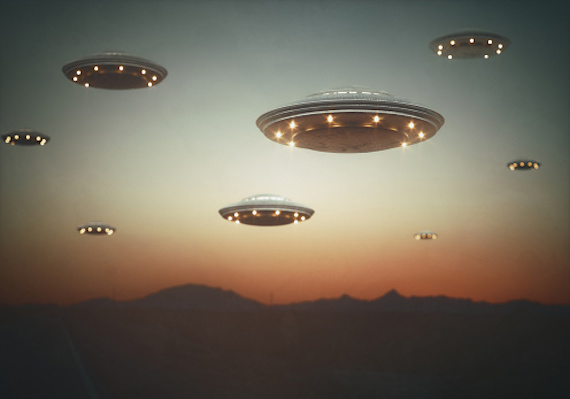 It would also turn out that several other unrelated witnesses had also seen a diamond shaped object in the sky at the time, meaning that perhaps it had not been a dream after all. There have been other stories of alien strangeness from here as well. Local historian and paranormal researcher Ben Walgate has spoken on some of these encounters, telling of a mysterious alien entity he calls the "Green Man" at a place called Stockton on the Forest. He had his own sighting of the thing while travelling back to York from a Cub Scout’s trip at Snowball Plantation, of which he says:

I saw this being, this creature.“It was walking on two legs through the woods. It was olive green head to toe, and it had a very small head, with very long arms in proportion to its body. I thought I was being pranked by the other scouts, so I didn’t bring it up. But no one ever mentioned it. This encounter came back to me around twenty years later, while at work. I saw it replay in front of my eyes for the first time. I found there’s been a lot of people who have seen this thing.

Ben even devoted a whole YouTube channel to it, called The 401 Files, where he goes into the Green man and various other weird things going on in Yorkshire, such as a "wild man’ – a prehistoric man living in the woods" at the North Yorkshire Moors. There have been numerous other sightings of strange creatures here, as well as UFOs, so what could account for it? Why should this place hold so much strangeness to it? Moran thinks it might have something to do with the very geography of the place, and has said of Todmorden and its surrounds:

‘Tod’, as it’s locally known, has alway been an interesting place to me. My Dad always claimed he could tell someone was from there as soon as he saw them. It was once in both Lancashire and Yorkshire – in fact the border followed the river that runs under the town hall – they used to say you could ballroom dance across both counties. It has a long history of the mythical and mysterious, from witches to ghosts and mysterious monolithic stones on the moors said to be ancient druid sites. There’s definitely something compelling about the area. It can’t be a coincidence that so much has happened there. Some Put it down to the geography, being uniquely situated at the meeting point of three Pennine valleys.

Is that what causes all of this? A geographical paradox of some sort? Or is it something else entirely? What is it with such places that cloak themselves with these mysteries? It all remains unknown, and Yorkshire remains one of the premiere hotspots of UFO and alien weirdness in England.

UFOs, Aliens and the Soviet Union in the Cold War: E.T. Intrigue