If you were the leader of a country and you were choosing a vessel and a crew to travel on a tip across the ocean to a new land, would you send your best vessel and your top sailors? “Probably” is a good answer not knowing the mission. If the purpose of the trip was to find a new land to move to because yours was in danger of falling into the ocean, then would you send the best of the best? Of course you would. Now, what if, after a year, they hadn’t returned and you need to send another crew to either find them or try the mission again. Would you send last year’s model of boat or would you send the latest technology with sailors trained to use it? You know the latter is the answer. In fact, the smarter crew on the faster boat might even find the older boat, overtake it and reach the new land first. That is the logic a University of California astronomer used in a new paper proposing that the same thing might happen with aliens visiting Earth – those who left their planet first might be the last to arrive, while those showing up first might be the smartest the planet has to offer using its best technology. Would this be confusing? Could it really happen? Let’s see if he’s right.

“Imagine if a robotic probe arrived in our Solar System, sent by an ETC (Extraterrestrial Civilization). They detected us and sent their probe to introduce themselves and learn more about us. We would be shocked, and the event would change civilization’s trajectory forever.”

The paper, published in the International Journal of Astrobiology, is written by Graeme Smith, a professor and an astronomer at the Department of Astronomy and Astrophysics at the University of California. A review of his paper by Universe Today sets up a possible scenario to test Smith’s theory. It starts with what we all know – it takes a LONG time to travel through space. The Voyagers have been at it for nearly 50 years and have barely made it out of the solar system. We must assume that any civilization whose probe or probes reach Earth are much more advanced than us. Let us make the reasonable assumption that the first one to land on our planet is robotic so it can last longer than the lifespan of ,e,bers of the alien civilization which sent it. As Graeme Smith suggests, this would be a big event on Earth – even if there are no members of the Extraterrestrial Civilization on the ship. Universe Today imagines what might happen:

“As humanity waited for the next probe, the scientific community would publish a flood of papers on the probe and what might happen next. A whole new field of study would be born. Politicians would stake entire careers on the issue, and opinion-piece writers, artists, and musicians would have a field day. Scams would appear, and cults might spring up.”

Does this sound familiar? Is it less science fiction and more something you can see happening today … perhaps even participating in yourself? For a real example – one that might illustrate what could happen next – we should consider cargo cults. These are less-advanced societies which received food or supplies flown in an airplane from a more advanced country – an event that changed their society. Examples of this happened during World War II on Pacific Islands from New Guinea to the Fiji Islands. Generations later, there are a few people there who are still waiting for their return. You can bet there will be a celebration when that happens. You can also bet that what the new cargo plane delivers will be so much better than the first one. What would happen if the plane were older than the original? The food stale, moldy and ancient? They might think it was a plane that traveled in time. They could be right. However, that might not be the case if it was a cargo space probe.

“If a space-faring civilization embarks on a program to send probes to interstellar destinations, the first probe to arrive at such a destination is not likely to be one of the earliest probes, but one of much more advanced capability. This conclusion is based on a scenario in which an extraterrestrial civilization (ETC) embarks upon an interstellar program during which it launches increasingly sophisticated probes whose departure speed increases as a function of time throughout the program.”

Smith breaks down his theory into two scenarios. The first is one that could apply to the Voyager probes – an ETC’s probe accidentally encounters another civilization. This assumes the ETC is (or was) not advanced enough to direct the probe or even to identify a specific destination to send it to … a destination which might have living beings who could accept or intercept the probe, interpret any messages it was carrying and perhaps even identify where it came from and respond. This is where we humans are. We have now developed the technology to send probes – tiny light sails – which can travel faster than the Voyagers have been. Thus it is conceivable that one launched today to quickly catch up to and pass one or both of them and then be accidentally found. The chances of the same ETC finding both are remote, so the chance of them being confused by getting the advanced model first are the same.

That brings us to Smith’s second scenario – that of an advanced civilization which specifically targets Earth because it has determined that this exoplanet (to them) has an atmosphere and water and are in its star’s habitable zone – making this good candidates for life that is potentially intelligent. Perhaps their technology is such that this ETC knows we are intelligent – albeit far less than they are. He also adds a twist. In one scenario, the technology – in this case, the speed of the probe – advances linearly. In the other, it advances exponentially. In the first case, the gap between the latest advance probe arriving and the primitive first probe might be hundreds of thousands of years – leading to no confusion as to what happened. In the second scenario, the gap between probes arriving would be much shorter, potentially and ironically causing more confusion on the receiving planet.

As you can see, there are a lot of assumptions being made in Smith’s theories, but that should not detract from them being an excellent and timely exercise in playing “what if?” – especially with so much new emphasis being placed on Unidentified Aerial Phenomena and the arrival of interstellar comets. Universe Today coins an excellent description of the dilemma this might cause - ‘communication-by-probe relativity.’ What if the intent behind the first probe to reach us was wildly different from the second one, which was actually sent earlier by a civilization whose values, government, and entire understanding had changed radically in the intervening centuries. Look at our own civilizations and how vastly they have changed over just a few hundred years. We think the Extraterrestrial Civilizations will be advanced technologically, but will they be as advanced in the civil sense?

Which assumption should we make – that alien civilizations are better than us in all ways or just technologically? Are they smart but aggressive?

Graeme Smith has made a thoughtful step towards figuring out what we should go “On the first probe to transit between two interstellar civilizations.” It is obvious we have a lot more thinking to do.

A New Government Report on UFOs/UAPs is Released 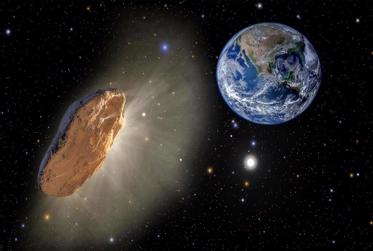